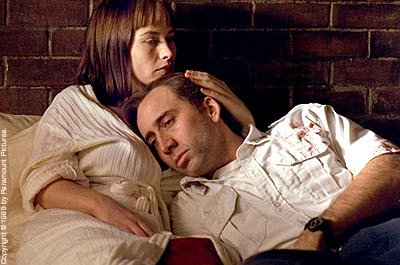 "Someday a real rain will come and wash all the scum off the street." In 1976, when Martin Scorsese first teamed with screenwriter Paul Schrader to create the landmark of American cinema known as Taxi Driver, many New Yorkers no doubt nodded their heads in assent with Travis Bickle’s famous line. That film presented a vision of New York as urban inferno, teeming with filth and crime and violence, and the kind of desperate loneliness that only comes from sharing a tiny island with eight million other people.

But then Super-Mayor Rudy Giuliani came along and whisked away all the muggers, hookers, crack addicts and homeless people virtually overnight. Times Square, that venal cesspool of degradation, was sucked into a black hole, replaced by a gleaming utopian Wonderland. And they all lived happily ever after.

That’s the myth anyway, and it’s a myth Scorsese and Schrader seem to be buying into when they open their latest collaboration, Bringing Out the Dead, with a title card reading, "This film takes place in New York City in the early 90’s." The implication couldn’t be clearer: this is pre-Giuliani Manhattan. You know, back in the bad old days. It’s a small but nonetheless irritating gesture, and an unnecessary one too, since Bringing Out the Dead takes place in a heightened, hallucinatory night world that has more in common with Gotham City than any literal New York.

Nicolas Cage stars as Frank Pierce, a burnt-out paramedic haunted by the ghosts of the patients he could not save. Night after night, Frank patrols the rain-slicked streets of the city, searching for redemption. Everywhere he goes, he sees the face of Rose, an asthmatic girl who died as a result of Frank’s botched attempt to insert a tube into her lung.

One night, Frank and his partner Larry (John Goodman) manage to resuscitate an older man who has suffered a cardiac arrest. The man’s daughter Mary (Patricia Arquette) follows them to the hospital and basically camps out there while waiting for her father to recover or die. In between calls, Frank strikes up a tentative friendship with Mary.

If this sounds like a thin story, that’s because it is. The movie isn’t overly concerned with plot; instead it unfolds as a series of vignettes in which Frank – variously partnered with Larry, cigar-chomping evangelist-manque Marcus (Ving Rhames), and psycho medic Tom (Tom Sizemore) – receives unwanted calls from dispatchers, responds to various emergencies, and tries to get himself fired. The intent, presumably, is to plug us directly into Frank’s world, to make us feel the numbing desensitization that occurs when life-threatening tragedies become routine. At times this approach is successful, but just as often the filmmakers have a hard time getting a handle on the tone they’re after.

Bringing Out the Dead is Martin Scorsese’s weirdest movie since The Last Temptation of Christ. It’s disorienting right from the start: the opening scenes unfold at an odd tempo and it almost feels as if a reel is missing. Pop songs appear on the soundtrack seemingly at random (REM’s "What’s the Frequency, Kenneth", The Who’s "Bell Boy") and fade away just as quickly. The film grows increasingly surreal as it goes along. In a scene that plays like an outtake from a David Lynch movie, Frank pays a visit to the Oasis, a crimson-hued drug lounge where the Deepak Chopra of pushers leads him on a bizarre head trip. And once Frank teams up with the criminally insane Tom Sizemore character, Bringing Out the Dead goes, for better or worse, right off the deep end.

By no means is the movie a complete disaster. Contrary to the jacked-up trailer, which makes it look like something Oliver Stone and Spike Lee cooked up together on a three-day crystal meth binge, some of the most effective moments are the quiet ones. Though this is not one of Cage’s best performances (he alternates between his two primary modes: sleepy-eyed somnambulism and bug-eyed "intensity"), his scenes with Patricia Arquette have the intimacy one would expect from a real-life married couple. In one of their most touching interludes, Cage and Arquette ride in the back of the ambulance together, smiling every time it hits a pothole and jostles them against the wall. It’s refreshing to see Scorsese dealing with basically good-hearted people after wallowing in ugliness with Cape Fear and Casino. His predatory camera is as relentless as ever, prowling the mean streets once again, and cinematographer Robert Richardson lights Frank and his fellow paramedics with a flared-out incandescence that suggests they are wearing halos (which may be the point).

And yet Bringing Out the Dead never manages to cohere into a solid piece of work. Stuck somewhere between the feverish urban insanity of Taxi Driver and the blackly comic night odyssey of After Hours, it will likely be remembered as an aberration in the Scorsese oeuvre. At its best, it serves as another element in the great director’s ongoing mosaic of New York; a vision that will long outlast anything Rudy Giuliani could ever hope to accomplish.