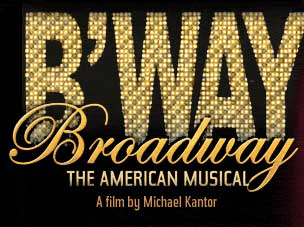 There are two types of people–those who hate musicals and those who would knock their own mothers down to get a front row seat. It&#146;s fitting that Julie Andrews narrates PBS&#146;s landmark series Broadway: The American Musical since Andrews, already British theatrical royalty, first performed on Broadway in The Boy Friend (1954) and, as Eliza Dolittle in My Fair Lady (1956), brought surpassing radiance to the Great White Way.

Andrews narrates the history of this uniquely American art form from its roots in vaudeville to impresario Florenz Ziegfield’s 1927 production of Showboat, &#147;guiding the Broadway musical to maturity.&#148; She notes that Showboat opened to a baffled audience because for the first time the elements of music, comedy and drama were forged together, becoming the archetype of a form that is still evolving.The series continues all the way through to the current season with the hit Wicked, &#147;a $40 million gamble that reflects how art and commerce intersect on Broadway.&#148;Broadway is a delightfully extended medley of nights in the American theater.

Director Michael Kantor smartly plots the eras out in six installments. "Give My Regards to Broadway" (1893-1927) tracks the beginnings of the American musical theater."Syncopated City" (1919-1933) captures a country on the move and headed for the decline of the Great Depression. "I Got Plenty O&#146; Nuttin" (1929-1942) shows America in crisis from financial collapse to the beginning of World War II. "Oh, What a Beautiful Mornin’" (1943-1960)exhibits Broadway&#146;s golden era during post-war renewal. "Tradition" (1957-1979) reflects changing theatrical trends mirroring civil unrest."Putting it Together" (1980-present) includes the rebuilding of tawdry Times Square into New York&#146;s glittering center of American theater.

The writers (Marc Fields, Laurence Maslon and JoAnn Young ) capture the history, performances and spirit of American musical theater with economy of script and fluid analysis.Kantor wisely frames the history of the musical in the broader social context that reflected and, in some instances, even defined America.Credit the editors (Kris Liem, Nancy Novack and Adam Zucker) for thrilling film montages, with rehearsal footage as the lead in and New York City itself revealed as the biggest theater of all.

Who wouldn&#146;t want to see a mystified Ed Sullivan backing away from a cast member of the rock musical Hair who is trying to put peace beads around Sullivan’s neck?All of the backstage drama is there. And, of course, there are once in a lifetime songs and thrilling choreography.&#147;Musicals blow the dust off of your soul,&#148;says Mel Brooks, creator of the 2001 megahit The Producers.

The series crisply moves to today&#146;s more cynical, bottom-line, corporate driven era. All of the spirit of the stage and the humanity of the performers is there, sometimes expressed in painfully personal terms. Jonathan Larson, whose musical Rent was about to open off Broadway, died at 35 while the show was in final rehearsals.A video of the then unknown composer/lyricist working his last shift at a diner is as moving a coda as the one in the show.

Broadway: The American Musical helps rescue an invaluable legacy that every American will find joyous.There have been attempts before to package historical Broadway, poorly filmed compendiums of desperate stabs at nostalgia.Broadway smartly steers away wherever possible from archival still photos and talking heads, the fodder of many documentaries, while it invaluably rescues TV kinescopes of performances from the 1950s when musicals were regarded as a great American tradition.

Kantor also captures the amusing and the arcane, from theatrical rogues like producer David Merrick to Jack Benny bitching about the $6.60 top ticket price of a Rogers and Hammerstein musical.Kitty Carlisle Hart tells a story about Merman, who could take her lyrics in shorthand from Ira Gershwin, because she was also working as a secretary.

Kantor sets the stage with smart visuals and some pristine archival footage that collectively catches the sweep of 100 years of theater history, giving it perspective that doesn&#146;t play like an endless list of name-dropping for the theater community and the devoted. Max Wilk, a theater historian, speaks to "the color line" on Broadway. Footage of Ethel Waters, who refused to work in minstrel shows or play to stereotypes, otherwise making her way as a song and dance woman, is inspiring.

The impact of 9/11 on the New York theater and dance communities and how they survived warranted more attention than given here.The writers seem to bail in following through on racial issues as well.And gay Broadway is visited mostly through the impact of AIDS, with more importance being put on Jerry Herman&#146;s production of La Cage Aux Folles, a minor musical from any point of view.Harvey Fierstein, the show&#146;s author, does say &#147; It would be great if there was a follow-up series to delve deeper into these issues.

But nothing detracts from the opportunity to see rehearsal footage from shows like Strike up the Band with Gershwin at the piano.Not so forgiving are cheesily recorded scenes from the early days of video, like the clips for Cats and Cabaret.But, by that time the sheer sweep and accuracy Kantor has achieved adds up to a rare docu-series that has a blood-red inner pulse. Broadway: The American Musical covers its ground and the subject is still alive.Who could ask for anything more?