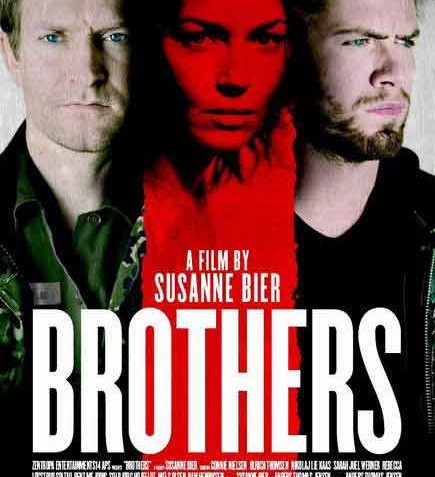 "I will always love you," Michael says in a voiceover reading of a letter to his wife, "The world isn’t good, bad, right, wrong…" His admirably nonjudgmental attitude extends to his brother, Jannik, who is being released from prison, having served a term for a drunken assault of a woman.

Jannik and Michael (who is happily married to Sarah and the father of two daughters) provide the classical contrast of the black sheep and the golden boy, but it’s dangerous to draw biblical parallels here. These brothers are not Cain and Abel–there is a strong and loving bond between them. Nor does Jannik fit the role of Prodigal Son, whose father welcomed him back with open arms. When Jannik returns from prison, his father is about as welcoming as a slap in the face and his hostility grows over time. Jannik’s rejection by his father provides a clue as to why Jannik may have turned out to be the troubled son.

Director Susanne Bier, whose little-seen Open Hearts was also a fine, character-based family drama, here fulfills the promise of the earlier film, building strong, three-dimensional characters who change over time as they deal with the vicissitudes of life. If anything, Bier is more strongly focused in Brothers, firmly in control of her material, never needing to spell out her ideas but letting the narrative and the characterizations provide the vehicle for her thoughtful observations.

Michael (Ulrich Thomsen) is deployed to Afghanistan on a tour of duty with the Danish forces there. His helicopter crashes and he ends up a prisoner of Afghani rebels. Meanwhile, his family has been told he was killed and they go through the pain of loss and the process of mourning. Michael’s war experience is horrific and it leaves him a changed man, suffering perhaps from post-traumatic stress disorder, clearly not the all-forgiving man he was before.

And Jannik (Nikolaj Lie Kaas), too, undergoes change, finding support particularly from Sarah (luminous Connie Nielsen) and putting his life back onto a responsible track. Stuff happens, things change, people change, relationships change–constants of life that Bier knits here into a story especially strong in conveying emotions. Both the writing and the skilled acting draw the viewer into the hearts of these characters with empathy of unusual depth.

Bier uses a good deal of hand-held camera, following her characters closely. She doesn’t overdo it; what, in less accomplished hands, might be distracting here enhances a sense of intimacy. Similarly, she frequently uses extreme closeups, as if the camera could climb right into the souls of her characters. As warm as her approach is to these people, though, Bier never descends into cheap sentiment or soap opera simplicities. And, while she clearly sets up the brothers for pointed contrast in the differing arcs of their individual story lines, she does so only within the appropriate emotional context of the family, without forcing or laboring the point.