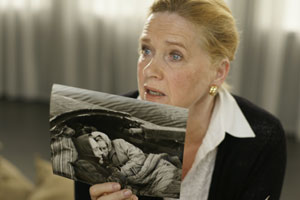 But Film is My Mistress
(Men filmen är min älskarinna)

In this stark and solemn self-portrait of the great Swedish director, Ingmar Bergman hands over his own private rehearsal reels to us, along with these words: “All that matters while I’m working is that the work is to be meaningful, and the work lives a life of its own…”

Bergman continues, “The only thing that I’m frightened of—and my God, I’m extremely frightened of it—is that suddenly the capacity to bring something to life, to make it touching, is taken from me…and that suddenly I don’t know how to do it any longer or that time runs out…”

Apparently his fear was baseless. These reels continue all the way to Saraband (2007).

This is the nearest we get to understanding what motivated Bergman’s last films, and this is the Bergman we meet in black-and-white or color run-throughs, filmed on the equally stark Faro Island, where he rehearsed and shot movies with his company crew.

We get lots of input and commentary from his biggest fans, led of course by Woody Allen: “There are certain people you think of that make up the fabric of the art world, of culture, of show business. And they’re just there all the time … And so with no Bergman, no Truffaut, no Fellini, no Buñuel, no Kurosawa…the ones that really define celluloid…the ones who defined it as art…All that gift goes, and it’s terrible!” (Wonder if we’ll feel the same after Woody goes?)

The documentary is not aimed merely at Bergman fanatics, but cineastes still awaiting the crowning grace of conviction will be rewarded with pearls from Olivier Assayas, John Sayles, Bernardo Bertolucci, Arnaud Desplechin, Martin Scorsese, Lars von Trier, and other directors. Much of what they say is must-hear stuff for the serious film student.

The documentary follows Bergman’s crew over islands, mostly his own beloved Faro Island, through set-ups and run-throughs for eight productions from Persona (1963) to Saraband, over forty years later, and most of it comes from Bergman’s own stock, handed over to UNESCO’s Memory of the World register and introduced by Liv Ullmann.

Bergman dressed and spoke carefully and immaculately, and carried himself with a patrician bearing. A complex enigma, he hovers inside the corner of every shot. Sven Nykvist broods about shooting schedules. Bibi Andersson ponders lines. Ullmann is stock still, devouring Bergman with her puppy eyes. The gang’s all here and Bergman should be relaxed, yet seems melancholy. “Despite my terrible melancholy, I’ve never been able to take anything seriously,” he suddenly interjects, as though reading our minds.

Sometimes you catch an intimate look exchanged with Ullmann or Nykvist, a nuance here, an entente with one of the others. But usually Bergman is so focused on ‘The Work,’ as he refers to it over and over, that he deflects all deeper scrutiny like a shield.

As a matter of fact, that could be read as the problem with this footage. As an actor contrives to present a mask, a director as rigorous as Bergman can do more and more pre-shooting tests, to eliminate all spontaneity and surprise and to more than half-finish a picture before it begins. In addition, the cast and crew live and work together for over twenty years. That adds many layers of comfort, but also removes all surprise.