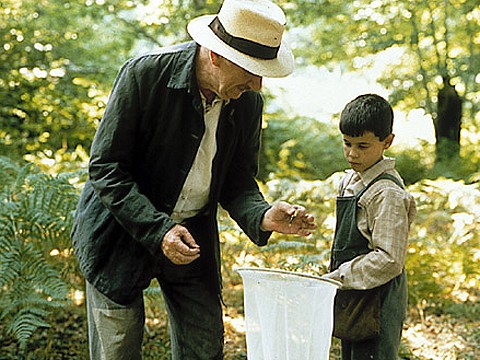 Hollywood "rite of passage" pictures often use skeletal plots with a last-second moral or two thrown in to justify yet another teen-focused story depicting more peephole-level sex and bodily functions than personal growth or enlightenment. Butterfly (La Lengua de las Mariposas) is a welcome exception. Beginning as a quiet and lighthearted account of youth, it progressively turns more somber, serving both as a coming of age story and a history lesson. It’s a seductive film where almost nothing is as simple and sunny as it first seems. It progresses from small scenes that teach about insects to larger ones concerning lost innocence and lost love. Eventually it poses a weighty question: how brave could we be &#150; how true are our beliefs? Its message is buffered, but never sugarcoated, and by its conclusion we’ve been made part of a young boy’s world and grown with him.

The film takes place in 1936 Spain, during that brief period between the formation of the Republic and the Civil War. Two factions are in conflict, as the old guard of the King, the military and the church is struggling to regain control from a newly-elected leftist democracy. It’s a time of temporary and uneasy tranquility – Hitler and his Stukas are still several months away – but already the unsteady rumblings of discord are apparent.

Moncho (Manuel Lozano) is a seven-year-old living in Galicia, able to read, but afraid of going to school because he’s heard that boys are sometimes beaten there. At his first day of class, he’s called to the front of the room to be introduced. He’s so frightened that he wets his pants, runs home and hides. His teacher Don Grigorio (Fernando Fernan Gomez, The Grandfather) later comes to Moncho’s home and persuades the boy to return the next day; he sees Moncho as "a sparrow out of the nest for the first time," a creature to be nurtured. He introduces Moncho to many things, particularly the world of nature (insects in particular) and Robert Louis Stevenson’s Treasure Island.

Moncho’s teenage brother is learning to play the saxophone – and about sex, love and longing. His father is a tailor and a Democratic Socialist. Seen from Moncho’s viewpoint, there’s a world of new experience: field trips with Don Grigorio where beautiful butterflies flit through the tall grasses, his brother becoming a man as he begins to respond to women. His father struggles with his leftist political leanings, too timid to openly profess them, in part, at least, because his wife has no desire to be seen as a rebel. Over time, the film’s focus gradually shifts from Moncho to politics, until the denouement in which the family’s commitment to their beliefs is tested.

Director Jose Luis Cuerda and cinematographer Javier G. Salmones offer Galicia as a golden-hued world filled with imagery – a multi-colored butterfly’s wing, the rough-hewn casing of the window that Moncho peers through to see a village couple making love.Viewing things through Moncho’s eyes both saves the film from sentimentality and restores a fresh sense of the wonder of a youngster seeing things for the first time.

Fernando Fernan Gomez has won three Goya Awards as Spain’s best actor of the year, and here shows why he’s a national treasure; his performance exudes wisdom and humanity without posturing, breathing life into a humble teacher with no concern for greatness beyond that which his students attain. As Moncho, Manuel Lozano is unaffected and natural, charming without being cloying.

The film ends on a single word that revises our perception of everything that has gone before. From the cocoon of a tender exposition of innocence, Butterfly emerges into the more harrowing territory of adult realities. It’s a powerful portrait of both a boy and a society coming to terms with change.