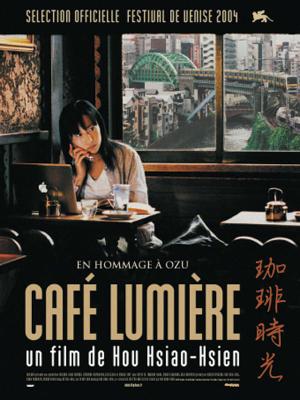 Originally conceived as part of a larger film tribute to Japanese director Yasujiro Ozu, Taiwanese filmmaker Hsiao-hsien Hou completed Cafe Lumiere as a kind of postmodern, twenty-first-century homage to Ozu&#146;s masterpiece Tokyo Story. Both films involve traditional parents coming to visit their urban-dwelling offspring in Tokyo; both are minimalist meditations which cast the urban landscape as impersonal backdrops to the everyday lives of ordinary people. Hou (Flowers of Shanghai, Millenium Mambo, The Puppetmaster) slowly and gracefully draws a poetic ideogram of Tokyo. Through his cinemagraphic brush strokes emerges a detailed miniature study of Yoko (Yo Hitoto), a young writer going about her life as she calmly comes to terms with her recent pregnancy.

The plot is spartan. Yoko is researching a book on Taiwanese composer Jiang Wen-Ye and spends a good deal of time traversing Tokyo by subway, frequently visiting her friend the bookseller Hajime (Tadanobu). She tells him her dreams while he pursues his interests in maps and the rail system. They share a meal or cup of coffee together on occasion. At one point the two set out to find the location of Cafe Dat, a cafe once frequented by Wen-Ye (whose music is used in the sound track). Even as Yoko meanders seemingly alone and lonely through the dense, complex urban landscape, she inevitably finds human contact in small interiors&#151;the coffee house, the bookstore, her apartment. She wears the mantle of life lightly indeed.

Having decided she has no interest in marrying the boyfriend who impregnated her, Yoko has returned to her life in Tokyo. She informs her parents in what they might interpret as a cavalier attitude. Her mother worries openly, but her father remains stoically mute. They seem more concerned with their daughter&#146;s unkempt housekeeping. Hajime, meanwhile, has fallen in love with Yoko which is manifested in his quiet but steadfast presence when she is in need. Into his private reverie she drops the news of her pregnancy with a matter-of-factness, undoubtedly disconcerting to him. But he never betrays his reactions to her.

As the pregnancy causes Yoko to reevaluate her life, she draws the people who love her most ever closer. Hou offers up to the audience&#146;s inspection the specificity of Yoko&#146;s urban jumble. In the middle of this seeming emptiness, Yoko finds herself safely cocooned in an urban village of her own. She borrows the proverbial cup of sugar and everything else unabashedly from an elderly neighbor. The cook from a neighborhood restaurant sees she is taken care of. The people she meets in her research work are open, welcoming, and try to be as helpful as possible. Kindnesses are committed a thousand times a day in simple, small gestures most people would scarcely notice.

The alienating anonymity of this city reveals itself as but a cold facade, beneath which warm human hearts beat and connect with each other, subtly, quietly, unobtrusively. Yoko carries the new, growing life in her womb, just as the subway carries Yoko and Hajime in the womb of its train cars through the urban landscape. The city itself becomes a metaphor for a living organism, a human body. Framing the visual haphazardness of urban streets in exquisite, dense, Shiko-like scroll paintings, Hou demonstrates how even in a megalopolis life is lived on a human scale, one day, one person at a time.