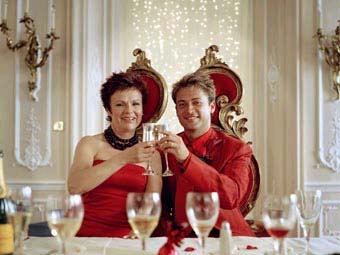 It&#146;s fascinating to watch a classic updated. Shakespeare is the author most often recast into the modern era, with Richard II transplanted into 1930s Britain, Macbeth into the world of small time gangsters, Hamlet into the intrigues of 21st century corporate life. Dickens&#146; Great Expectations has been filmed as a modern story, as has Jane Austin&#146;s Emma. Sometimes the result has been an embarrassing affront to a dead author. Sometimes it&#146;s an adept illustration of the timelessness of great literature.

Chaucer&#146;s unfinished masterpiece, Canterbury Tales, poses both problems and opportunities for a modern retelling. While some remember this long poem mainly as a tedious plod through Middle English, once having cut through all the archaic terms and pronunciations what remains is an ambitious and complex work of fiction with a deceptively simple premise. Thirty travelers of various occupations, classes and outlooks, a cross section of British medieval society, pause on their trek to Canterbury and entertain themselves by telling each other stories. In the hands of Chaucer this is far more than merely an excuse for a story collection. The descriptions of the travelers are as important as the tales they tell. In many cases, the story of the storyteller reflects upon the story told, the story told reflects back upon the story-teller, and the result is a complex and rather sophisticated series of character studies.

The BBCAmerica series, which transplants the stories into 21st century Britain, opens with the most well known of these, The Wife of Bath. In this version the garrulous, ribald and often married wife of Bath is transformed into Beth Craddock (Julie Walters), a successful fifty-three year old television actress with a hearty appetite for men or, to be more specific, husbands. When her current husband leaves her for another woman, she turns to a handsome young co-star Jerome (Paul Nicholls.) To those unfamiliar with Chaucer&#146;s poem, the story that unfolds is funny, sad, and in many ways, unexpected. To those who know and love the original, it&#146;s a deft retelling in which the tale&#146;s lengthy, down-to-earth prologue is successfully combined with the fabulously romantic fairytale told by the wife. By the end, the most ardent Chaucer lover has to admit that Julie Walters, even as a 21st century television celebrity, is unquestionably a believable reincarnation of Chaucer&#146;s Wife of Bath.

There are three other episodes in the series. The Knight&#146;s Tale, a high-flown romance of chivalrous rivalry between two imprisoned warriors becomes a gritty story of two prison inmates who fall in love with the same woman. The Sea Captain&#146;s Tale, a comic, cynical story of avarice, adultery and betrayal in the merchant class, is set in an Asian neighborhood in Gravesend, where an ambitious young businessman becomes entangled with the local Godfather&#146;s manipulative wife. Both episodes are well written, and well acted, The Knight&#146;s Tale genuinely touching and hopeful, The Sea Captain&#146;s Tale as dryly funny as the original.

But as in the poem, it&#146;s the famously bawdy Miller&#146;s Tale (the one that high school readers usually turn to first) that&#146;s the true standout. A ferociously jealous suburban pub owner with a very lovely, very young wife, is systematically conned by "Nick," a well-dressed stranger with an expensive car, sleek good looks and an occasional hard glint behind his blue-eyed Irish blarney. Since it&#146;s clear at the outset that Nick is up to no good, the plot is driven by the question of how he intends to maneuver the husband&#146;s only slightly reluctant wife into the horizontal and James Nesbitt as Nick makes the inevitable fascinating through the sheer brio of his performance. The climax, of The Miller&#146;s Tale. as any English 101 student will tell you, involves a dark night, a perverse kiss, and a heated metal rod, and this version does not disappoint. Like its original, it&#146;s a nasty piece of work that deliciously appeals to our basest instincts.