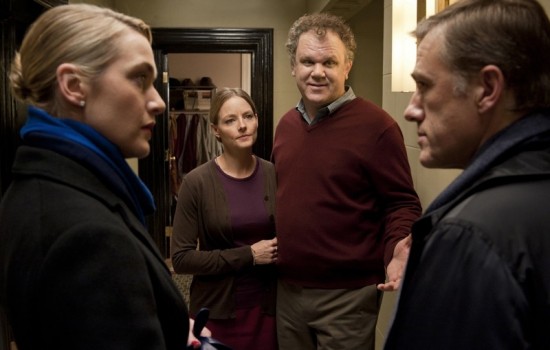 The one time I almost laughed in Roman Polanski’s newest and harshest comedy was when Kate Winslet throws her lawyer husband’s Blackberry into a vase of tulips. Indeed, most of the first hour of “Carnage” we all yearn for Winslet to do just that to the Blackberry. We want her to rip the thing apart, jump up and down on it, put it in the dishwasher on “Power Wash,” hurl it out of the window… and then walk the hell out of the movie.

It’s one of the few really convincing, almost-funny moments in “Carnage,” a protocol-and-social-discomfort joke for sophisticates that by all accounts swept Broadway in the original stage version two years ago. The Marcia Gay Harden-James Gandolfini stage version in a Christopher Hampton translation sold out its run in New York and must have been more convincing than this. Aside from the credits, no attempt is made to move beyond the original set to an outside shoot. Okay, we realize Polanski is not about to go on location in Manhattan, but can’t he find something comparable?

The Blackberry is high on a list of improbably stagey items topped by a tin-eared adaptation of Yasmina Reza’s stage play adapted by two folks who don’t think in English and don’t live in Manhattan.

A New York matron whose adolescent son has bopped a buddy in a playground scuffle, Winslet drags her husband along to meet the Longstreets, parents of the victim. Over cobbler and coffee at their coffee table, the thin veneer of civility between the Cowans (Winslet and Waltz) and the Longstreets (O’Reilly and Foster) strains and finally snaps, revealing a quartet of savages baring teeth and claws.

Confined to the ritzy Upper Eastside apartment belonging to Reilly and Foster—can they really afford this?—the Cowans feint and parry, almost leaving several times before being yanked back to consume first cobbler, then scotch, with messy results.

The lumbering Michael Longstreet describes himself as “a short-tempered S.O.B.” and wholesaler of widgets. His wife Penelope is a politically correct art scholar. How they met and married, produced a son, and snagged this prime real estate is beyond our suspension of disbelief, and their son and their abandoned hamster receive all of our respectful sympathies.

Puh-leeze! Winslet’s avaricious lawyer husband (Christoph Waltz) might want to bid on this swanky duplex, but Polanski has been out of New York and in France for too long if he thinks the Longstreets could outswing him on that deal.

Soon enough into the movie, you realize this is simply the French farce tradition, which works brilliantly inside a theater—that is, a certain kind of theater, full of patrons jangling with jewelry, jingling with cash, and several drinks inside them. I’m just not sure such a the story can travel beyond the proscenium the movie version remains so claustrophobically behind.

“Carnage” originated as a clever satire in France, where it skewered a certain peculiarly Parisian pretentiousness of the 16eme arrondissement variety. But the handpicked cast of Winslet, O’Reilly, Waltz and Foster are all miscast, Foster in particular. These are not just obnoxious characters, made to look as obnoxious as possible. They are grossly, idiotically, insanely lacking in common decency. Like honey-baked hams at Christmas, all four of them drag that running phone gag way beyond its expiration date, as though trying to be heard in the Upper Balcony seats.

This brings up questions about language, culture, and Yasmina Reza’s sense of humor, which is acerbic, scalpel-like in its urgent wish to skewer hypocrisy, and laser keen in French. But sadly, it’s none of the above in American English, and it seems essentially not just stagey but dated. So although the Blackberry has been such a helpful running gag throughout the action that you want it drowned, you want it so badly that in the end it’s not really that much fun when it happens.

Still, Polanski is the director of four of the greatest movies of all time, his previous film, “The Ghost Writer,” was a work of boldness and cunning. His touch is lacking in “Carnage,” but we can always wait impatiently for his next film.