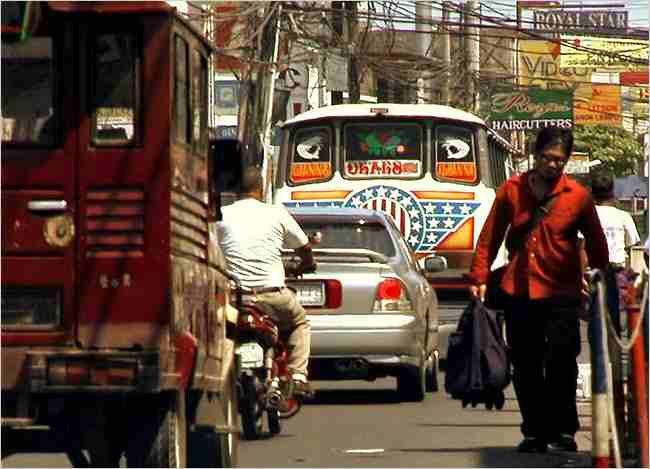 Heralded as a "truly independent" indie film, Cavite was written, directed, and produced by Filipino-Americans Ian Gamazon and Neill Dela Llana. The film also stars Gamazon as Adam, a 32-year-old security guard in San Diego. The directing duo brilliantly stretch the limits of their very low budget to moving aesthetic and dramatic effect. Filmed using a hand-held camera and shot on location, mostly in the poor city of Cavite (part of the sprawling slums outside Manila), Cavite is a psychological thriller that gets most of its cultural and political points across through both show and tell.

Adam&#146;s life has not amounted to much in America and, as the film opens, it is rapidly falling apart. He works as a night watchman, a poorly paid rent-a-cop keeping an eye on the cultural excesses of wealthier, American social superiors. He keeps an eye on private yachts, drives past a house laden with Christmas lights, out of the corner of his eye he watches an altercation between a street hooker and her john. Through a steady stream of such details Gamazon and Dela Llana pack this film visually full with their underlying social, ethical and self observations.

When Adam learns his father has died, he must fly to the Philippines, where his family still lives. Once en route, his (white American) girlfriend tries to break up with him over the phone. The girlfriend has panicked over discovering she is pregnant and is feeling guilty about communicating her decision to have an abortion. The staging of this physically disconnected argument over matters of the heart and womb, and religious differences, comes to symbolize the radical alienation and evident moral bankruptcy of the present first-world order, where ordinary people are caught up in the webs of invisible powers greater than themselves, lashing out irrationally at each other in their powerlessness.

Once Adam touches down in Manila, his life takes a ninety-degree turn, and the narrative lifts off at this point. Adam&#146;s mother is not at the airport to meet him. Instead, he answers a cell phone and quickly falls under the persuasive power of a kidnapper, who exists as a disembodied voice at the other end of the phone connection. There ensues a kind of cat-and-mouse game between the two, as Adam struggles against having his will broken by this voice. As the kidnapper bends Adam to seemingly short-sighted purposes of political revenge, an even more remarkable story unfolds.

The voice directs Adam to walk seemingly every nook and cranny of Cavite, to eat and drink local foods, to ride Jeepney busses and gamble at cock fights, to mingle closely with locals every step of the way. He is exhorted on more than one occasion to wash himself, to purify his body. The voiced taunts him for being "a faggot," "soft," and for not knowing "his own" culture. The voice compels Adam to rub his face in the garbage and excrement of Filipino poverty, which looks increasingly like effluvia flowing from first-world self-indulgence, and to join in jihad against "the American enemy." Lest the film seem overtly polemical, the kidnapper also serves as a distressing, careful study in patriarchal authoritarianism.

Cavite puts a human face on the nameless fears felt on both sides of this political, cultural and economic divide today. Garbed in the mantle of psychological thriller, Cavite shows, more than tells, how "globalization" functions, what it feels and smells and tastes like for those who experience it at ground level. The historical importance of Cavite, as the seat of Filipino independence (in 1898), underlines the multiple layers of meaning in play here. Ian Gamazon and Neill Dela Llana strike a prickly balance between fiction and documentary, holding a sustained tension between the filmmakers&#146; Filipino and American identities, as a simulacrum of the tension between first and third world identities and core values.

$2.76 (as of January 22, 2021 - More infoProduct prices and availability are accurate as of the date/time indicated and are subject to change. Any price and availability information displayed on [relevant Amazon Site(s), as applicable] at the time of purchase will apply to the purchase of this product.)

(36918)
$5.91 (as of January 22, 2021 - More infoProduct prices and availability are accurate as of the date/time indicated and are subject to change. Any price and availability information displayed on [relevant Amazon Site(s), as applicable] at the time of purchase will apply to the purchase of this product.)

$2.88 (as of January 22, 2021 - More infoProduct prices and availability are accurate as of the date/time indicated and are subject to change. Any price and availability information displayed on [relevant Amazon Site(s), as applicable] at the time of purchase will apply to the purchase of this product.)
related posts