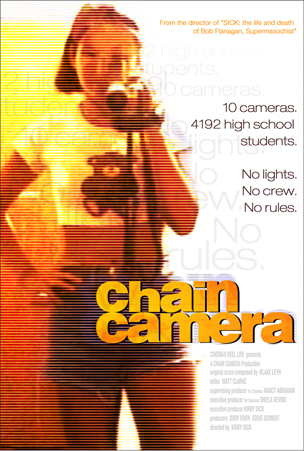 With sponsorship from Cinemax Reel Life, documentarian Dick Kirby passed out ten video cameras to the students of John Marshall High School in Los Angeles. A student would have a week with one of the cameras before passing it along to someone else, and so on throughout the school year. Given the demographics of the school, made up of forty-one different ethnicities among over four thousand students, Kirby had a clear objective: to present a largely minority perspective of lower-to-middle class teenage life. While the film is nominally created by the students themselves, Chain Camera feels as if Kirby&#146;s work in the editing room excessively shapes the final product. Footage from sixteen students make up the final film, and strangely, this feels like too many. Each student gets about five minutes of screen time, which is just too brief to do justice to their lives. Of course, they may simply have not provided Kirby with enough interesting material, but one does not get this sense with many of them. Instead, Kirby&#146;s egalitarian impulses get the best of him as he devotes time pretty evenly to each student regardless of how interesting they are individually. He cuts only one or two &#147;stories&#148; short because their only purpose is to comment on or contrast the &#147;stories&#148; of others.

The most interesting life might be Cinammon&#146;s. A stout, white lesbian, she thinks she intimidates men by being smart and opinionated. She displays the possession she calls the &#147;most sacred thing in her life,&#148; a folder in which she has kept every letter ever exchanged between her and her butch girlfriend, Jen. Cinammon relates a funny story about how she made her mom&#146;s friend spit out coffee at the kitchen table by revealing her date the previous night was with a woman. In the context of her footage, Cinammon shows some signs of sour grapes when she stereotypes men as prizing their video games above all else. Chain Camera works best in moments like this, when friction arises between what the teenager believes and what the world is really like. Jen is funny, extremely honest, and devoted to her lover. Despite Cinammon and Jen&#146;s status as outsiders, they come off as very fortunate to have found each other, which is more than can be said for Tim.

Tim, an overweight white male, uses his opportunity to appear in the movies as a personal ad. In addition to talking about how he has never had a girlfriend and badly wants one, Tim holds up to the camera a sign saying, &#147;Ladies, I&#146;m single&#148; several times. Tim otherwise seems well-adjusted despite his pretend bouts of professional wrestling with another of his stocky friends, but the way Kirby edits Tim&#146;s segment, his desperation for female companionship verges on exploitation.

There is no doubt however that Rosemary, a seventeen-year old Asian, is ready for the Jerry Springer Show. She talks about running away from home and being formerly bulimic. She shows wrist scars from a suicide attempt and she desires to be a stripper when she turns eighteen. Just as painfully voyeuristic is seeing Winfred, a black aspiring football player, talking about how his girlfriend called him &#147;conceited&#148; on the answering machine, but he does not know what the word means. Football is the most important thing in Winfred&#146;s life, but he became ineligible for the school team when he failed math.

The most painful segment deals with Ethan, a white, bespectacled boy who had to take a special education class to enhance his social skills. A girl helming the camera taunts him about his first kiss, and when another girl kisses him as a joke, she tells him he must not tell anyone. Ethan misinterprets his ascendancy to &#147;Homecoming Prince&#148; as his being well liked. While maintaining a wall of pictures of actresses and models, he does not know what a &#147;virgin&#148; is.

We also get gay, pudgy Hispanic Fernando, who is into white but not black or Asian men; cute, sheltered Amy who loves band, has never masturbated, and is very much in love with boyfriend Christian; Puerto Rican-Irish Shannon who is addicted to sex, loves pot, and has Tourette Syndrome. Their lives are most definitely interesting, but as Kirby presents them, we would be fools to make generalizations from these presentations, as ghoulish as some of them are.

The primary themes running through Chain Camera are, unsurprisingly, teenagers&#146; obsession with sex and their relationships with their parents. Kirby seemingly includes some students in the film just so he can make a point about one of these aspects. While Tim, showing his love for his mother, and Winfred, spouting his disdain for his father, have much else to say, Hispanic Stephanie&#146;s segment is devoted entirely to her loving relationship with her obnoxious father, and Hispanic Jesse in his segment does little else than put down his alcoholic mother.

Kirby uses Mena, an Ethiopian, and Silva, an Armenian, to illustrate youth&#146;s concern with race relations. Kirby does get powerful moments &#150; in an ironic instance, Silva, despite her own family being immigrants, says she wants the U.S. to limit immigration while making the racist claim that Latinos are lazy do-nothings. However, Kirby&#146;s use of the students this way feels extremely reductive. Seeing only those controversial or leering moments in these people&#146;s lives does them an injustice.

What is ultimately learned from these sixteen individuals is that they all want love and sex (not necessarily in that order), have intense relationships with their parent(s) whether they love them or hate them, have easy exposure to illicit drugs, and will probably be frighteningly embarrassed ten years from now to have appeared in this movie.