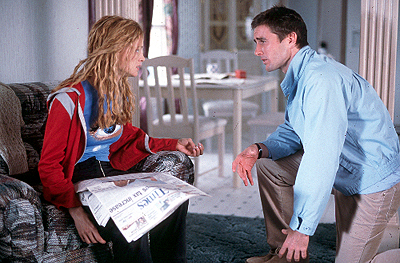 Some movies are like cinematic Advil: they dull the throb of life without ever getting you high. The next time the world is beating you up and you need to hunker down for a couple hours, you might want to watch Committed. It not only unknots the gristle in modern life, it tenderizes the meat in it to the consistency of mashed potatoes.

Committed follows the fortunes of Joline (Heather Graham), a New York City rock-club owner for whom fidelity is the bedrock of life. To Jo, keeping one&#146;s word is a religion, a non-negotiable proposition that governs her relationships with her friends, her employees, and especially her husband Carl (Luke Wilson). And so when Carl undergoes a sudden (and sketchy) life crisis and walks out on her, Jo takes off in pursuit of him with only a picture postcard of a prickly pear cactus as a clue to his whereabouts. She roams the stretches of western Texas until she finds him working for an El Paso newspaper and living in a mobile home near the Mexican border. At first she only spies on him, meddling in his life from behind the scenes in hopes that, having found fulfillment, he&#146;ll return to her. But when she finds Carl keeping company with a waitress at Mexican restaurant (the flinty Patricia Velazquez), she embarks on a spiritual vigil to make him return to her side. When he doesn&#146;t, her devotion spills over into obsession, and she has to bridge the gulf between her idealism and an obstinate real world.

Joline is known as Jo to her friends, and everything in Committed is stamped with this same kind of coziness. Even Jo&#146;s breakdown and confinement in a mental ward are muffled &#150; there&#146;s nothing crazy about her craziness. No real ache or outrage is allowed to intrude on this feel-okay movie, not even when Jo forces two would-be highway robbers into an absolutely hellacious car crash. Director Lisa Krueger plays down to her wispy material, presenting her scenes like exhibits in a doily museum. Even the bits of humor that work &#150; a shot of Jo disconsolately hugging a dog which is then led off by its irate owner, or Jo sitting in her car and being serenaded by a mariachi band that&#146;s gathered round the driver&#146;s door &#150; don&#146;t elicit laughs so much as a distanced "mmm" from the back of one&#146;s throat.

Committed combines what seems like every indie cliche into a single motion picture. The attractive and independent but lovelorn heroine. The menagerie of eccentrics who catch the variety of life but none of its flavor. The quirky adventures that don&#146;t build on each other. The low-key charm and obligatory nod to magical realism. The trendy, kitschy settings. And all of it culminating in a series of open-ended questions &#150; spoken in voice-over, naturally &#150; that tell us how damned relative life is once everything is said and done. By the end you feel like you&#146;ve been chloroformed.

Graham fits into the movie&#146;s look and mood &#150; or rather, she is its look and mood &#150; but she never flashes that gesture of actorly defiance that you can&#146;t get out of your mind once the lights come up, which is a feat considering her screen-time. She&#146;s best when not reciting Krueger&#146;s broth-thin dialogue, for as she showed in Bowfinger, that stringbean, knock-kneed body is a comedian&#146;s natural tool chest. (Here&#146;s hoping she finds material that&#146;s worthy of it.) Luke Wilson, who showed promise not all that long ago, has already played too many of these bland supporting roles &#150; one more hangdog look from the guy and somebody&#146;s sure to kill him. As the Mexican medicine man who becomes Jo&#146;s mentor, Alfonso Arau never gets to change his Mount Rushmore expression, and Krueger has jammed him into a cowboy hat that hides the top half of his head &#150; a shame since Arau can be a wonderfully expressive actor. Casey Affleck comes off best as Jay, Joline&#146;s brother. The movie&#146;s one truly funny creation, Jay is in a perpetual state of heat &#150; he even comes on to Jo at one point &#150; and Affleck delivers his lines in a semi-hoarse whisper that makes it seem as if the weakness in Jay&#146;s flesh extends even to his vocal chords.

Whenever a Waterworld or Phantom Menace comes out, it&#146;s not unusual to hear someone decrying how all that money could have been better spent on the public weal &#150; so many homeless fed, classrooms built, and so on. It&#146;s a silly way of thinking, this equating of apples and oranges under some Harper&#146;s Index calculation, for it isn&#146;t as if the $200 million dollars spent on Titanic was the only $200 million dollars on the face of the earth. And yet after watching a gossamer nothing like Committed, one can&#146;t help thinking that the few million dollars that it cost could have paid plenty of teachers, too.