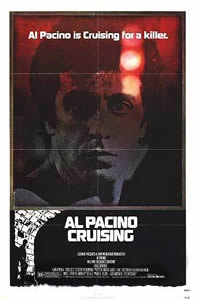 And with that, the crowd at San Francisco’s Castro Theater–the gayest theater in the gayest neighborhood of the gayest city in America–sat down recently for a special screening of Friedkin’s 1980 Cruising.

You know the plot: a serial killer is making the rounds in New York’s underground gay S&M scene, and nubile young rookie cop Al Pacino goes undercover as a nubile young slut-puppy to lure the killer out of hiding.

You know the controversy: the gays hated this movie when it was first released. Now remember. This was ten years after Stonewall and a year before AIDS. The gays had the infrastructure and the attention span to unleash a nation-wide excoriation on Friedkin, and boy did they.

But is it a good film or what? It doesn’t even matter. Friedkin said he intended Cruising to be this intense police thriller and character study of the erosive effects of undercover blah-blah-blah, but who can pay attention to any of that when the movie is packed wall to wall with Al Fucking Pacino Getting Into One Bizarre Queer Scenerio After Another: looking all bewildered after being propositioned for piss-play (Hello Pacino! Don’t wear a yellow hankie and drink lots of beer unless you mean it!); getting all "Whoo Aah!" on a dancefloor with a ragful of amyl nitrate in his mouth; negotiating sex in a dark park by asking "Hips or lips?" (ew!); being rescued by his fellow cops after getting himself hogtied buck naked to a motel bed. And, for some reason, he kept getting in fights with men in underwear. First he gets bitchslapped by a giant black man in a jockstrap; then this really hot dude in some Ginch Gonch-looking underwear pulls a knife on Pacino and they have this awkwardly choreographed fight in one of the gayest apartment you’ve ever seen on film. (BTW: the knife-wielding stud would play Samantha Jones’ hot hotelier-daddy-boyfriend twenty years later in Season 4 of Sex and the City. You know who I mean. The guy who skinny dips with Samantha on the rooftop and shows his wang while that stupid Sade song is playing–that dude.)

So anyway, Al "Serpico" Pacino does catch the killer,and heturns out to be this anemic music student (really?) who talks to his dead father (seriously?) when he’s not jogging all over the city in tight jeans (for real?), but then another murder happens so maybe he wasn’t the killer after all–or was he? Friedkin, in attendance at the Castro screening, said that what frustrated people most wasn’t the film’s depiction of gay sex–it was the complex ending. People couldn’t handle it. You know, complexity. Yeah Friedkin. That’s what people were upset about.

On a side note, Friedkin is the most charismatic 72 year-old you’ll ever meet. You totally want to play golf with this guy so you can ride around in a cart with him the entire day and have him all to yourself.

He also explained to the Castro audience that Steven Spielberg was originally attached to the project, and Spielberg turned over the rights afterbeing hogtied and getting his nipple flicked with a switchblade. OK. So not really. But don’t you want to live in a universe where that’s true? Apparently there was a real gay serial murderer, and he turned out to have been an extra in Friedkin’s "The French Connection," so then Friedkin got all obsessed with making a movie where the torsos of gay murder victims would be found in the New York harbor, and he spent months hanging out in the gay leather bars where Cruising would eventually be shot. At some point, and this is totally true, Friedkin stripped down to a jockstrap to gain the trust of the homosexuals. Would Steven Spielberg have done the same? We’ll never know.

Twenty-seven years later, you can still admire the teabags on Friedkin for showing a guy in a sling waiting to be fisted and a guy in a bathtub waiting to be pissed on. Because after a decade of cooption by Hollywood, queer cinema has gotten awfully flaccid. Vaseline now goes on the lens, not on the menacingly thick forearms of a leather daddy. That’s understandable, given the AIDS epidemic and the widening gay civil rights agenda. But Cruising, with itsspit-shined new print, invoked not a few sighs of wistfulness from an audience nostalgic for the wild, wild 70’s.

If you can’t see it during its weeklong run at the Castro, add it to your Netflix queue. Then bake a pan of pot brownies or douse a hankie full of amyl nitrateand call your bestest gayfriends over. It’s a good bad time. Or a bad good time.Either way you’ll be high. Whoo Ahh!