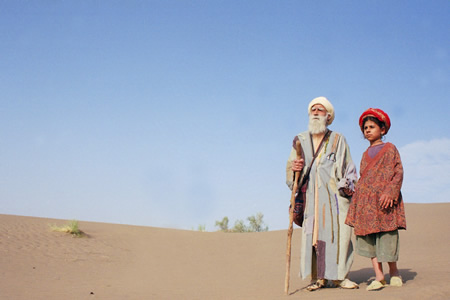 Written by Nacer Khemir, with collaboration by Tonino Guerra

The devout Muslim mystic Rumi preached a universal message of love as the path to awareness and to God. Born in the 13th century, he is the most famous of all the follows of Sufism, the mystical offshoot of Islam. To this day, Rumi’s poetry attracts people of all religions with its gentle though veiled directives towards harmony and oneness with the universe. Those who find comfort in the poet’s message may welcome Bab’Aziz, a visual rendering of the truths and philosophies of Sufism. Those who find Rumi’s wisdom as unknowable as desert sand constantly reshaped by the wind that blows it, will have the same reaction to Bab’Aziz—that it’s also just a lot of beautiful sand…literally…but with nothing to contain it, to give it substance.

The creator of this mirage of meaning is Nacer Khemir, a Tunisian-born filmmaker, poet and sculptor who has lived in Paris most of his adult life. Mr. Khemir has said that he decided to make Bab’Aziz out of a desire to show another side of Islam, a side that has been largely overshadowed by the rise of fundamentalism in Muslim countries. Much like Jesus’ message of love and forgiveness, the Sufists extol the virtues of love, tolerance and charity, a vastly different image than the West’s prejudicial vision of Muslims as fanatical terrorists who thrive on hatred. Mr. Khemir has said that his film has a political agenda, to remind the West of this kinder, gentler version of Islam.

Unfortunately, Islamic mysticism, much like Christian mysticism, is about as divorced from rational thought as fundamentalism is, and hard for many of us Western pragmatists to relate to, much less take seriously. Take the dervishes, the true mystics who devote their lives to their mystical journey, foregoing worldly comforts and pleasures to wander the desert in search of—and here is where the sand starts running through my fingers—“where we all come from and where we all must return.” (I quote from the film.)

In Mr. Khemir’s film, an 85-year-old man, Bab’Aziz, is one of these dervishes, and we first encounter him wandering the desert with his seven-year-old granddaughter, Ishtar. They are ostensibly on their way to a reunion for dervishes. As Bab’Aziz explains to Ishtar, every 30 years dervishes gather together in a desert congregation where music, poetry and dance is performed as a means to get closer to God.

Ishtar decides to follow her grandfather on his journey through the desert to this reunion. As they walk over endless mounds of sand, Ishtar complains of hunger, cold, and even fear of the dark, so Bab’Aziz decides to distract her with various stories he tells her along the way.

This film has been compared to the tales of the Arabian Nights, and in terms of the film’s framework, the comparison is apt. The stories Bab’Aziz tells lead to other stories within these stories, and even the framing device of Bab’Aziz and Ishtar finds itself interlaced into these other stories. All of these tales are enchantingly woven, full of mystery and magic, but they don’t ever end up being about anything. Even the first tale, the one about the prince who looks into a pool of water, and contemplates his soul, appears to have no real meaning beyond the act itself. He is just looking in a pool of water…for a very long time. Bab’Aziz and Ishtar encounter other wanderers on their journey to the dervish reunion, and these men also have tales to tell, just as enchantingly woven, and as puzzling in their message.

This mystery of the film’s meaning encroaches on the dialogue as well, especially the aphorisms of Bab’Aziz. Several times during their journey, Ishtar worries that they are getting lost, and keeps asking Bab’Aziz how he knows the way. “He who is at peace will know the way,” says Bab’Aziz, and then, later, “Everyone uses his most precious gift to find the way.” Bab’Aziz is full of these enigmatic sayings that sound more like brainteasers than truths. They hide an empty echo behind what sounds like a profound insight. Take this one, for example: “Just as the unborn child knows nothing of the marvels awaiting him, we know nothing of what awaits us after death.”

Granted, it may be my Western mind that keeps me from grasping the truths that Mr. Khemir offers us; maybe its my Western insistence on clarity that doesn’t allow me to see that meaning is fluid, and trying to grasp it is a fool’s task. It’s like writing in the sand—now you see it, now you don’t. Still, I can’t help but think I’m being taken on a journey to nowhere; or, as in Bab’Aziz, right back to the beginning—the pool of water that started it all.

At the movie’s end, when Bab’Aziz undoes his turban and sits down in his own grave to await his death, a young man asks him why he is so calm. “Death is the end of everything,” the young man cries out anxiously. Bathed in tranquility, Bab’Aziz patiently replies, “How can it be the end of everything when it doesn’t have a beginning?”

On that note, dear reader, this reviewer has decided to put an end to her review.

(22082)
$17.89 (as of January 25, 2021 - More infoProduct prices and availability are accurate as of the date/time indicated and are subject to change. Any price and availability information displayed on [relevant Amazon Site(s), as applicable] at the time of purchase will apply to the purchase of this product.)

(25796)
$23.81 (as of January 25, 2021 - More infoProduct prices and availability are accurate as of the date/time indicated and are subject to change. Any price and availability information displayed on [relevant Amazon Site(s), as applicable] at the time of purchase will apply to the purchase of this product.)

(20901)
$7.99 (as of January 25, 2021 - More infoProduct prices and availability are accurate as of the date/time indicated and are subject to change. Any price and availability information displayed on [relevant Amazon Site(s), as applicable] at the time of purchase will apply to the purchase of this product.)
related posts