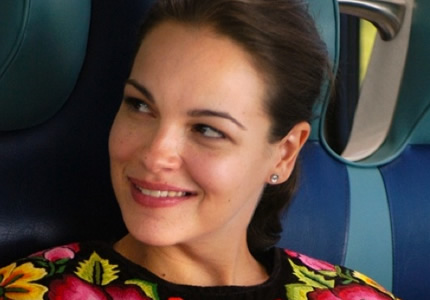 Written by Monteverde with Patrick Million and Leo Severino

Maybe it’s because I saw this film on my birthday and was already primed for a sentimental affirmation of humanity. Maybe I’m just a pushover for a sappy movie. Whatever the reason, I loved “Bella,” and it seems from initial theater receipts that I’m not the only one, despite some pretty severe panning by critics. Maybe this is just another piece of evidence that critics in general are a bunch of cynics who can’t see a rainbow without wondering who put it there in the first place, and aren’t those colors just a wee bit garish?

I therefore highly recommend that you leave your suspicions of the motives behind sentiment at home when you go see this movie. Only then will you see “Bella” for the beautiful rainbow it is. “Bella” is both an extremely sad and dizzyingly uplifting parable of remorse and redemption, a tale of two damaged souls who end up helping each other find release from their tragic pasts. It’s a story about a woman who literally gives a man a new life, and in so doing, lets him become the father she lost.

Granted, all that does sound overly melodramatic, and the film does tread across this difficult territory with some faltering into the maudlin. “Bella” may be extremely moving, but it’s also flawed. It’s hard to ignore the plot contrivances that stick out like billboards, or the unrealistic depiction of the perfect Chicano family—the movie aggrandizes Mexican culture almost to the point of caricature. But these are small complaints when you take “Bella” as a whole, and in the end, that idealized loving family is necessary to hold up an example by which to live. “Bella” is after all, about taking what you’ve got and making it beautiful. It’s about the striving for goodness.

A short but powerful scene begins the movie. It’s really the first part of a flashback that is given to us piecemeal. This first segment introduces us to Jose, a man who seems destined for a brilliant future. He is not only handsome and self-assured, but his feet are like quicksilver, and he can move a soccer ball almost as if by willpower alone. The actor, Eduardo Verastegui, is a star in his native Mexico, and when you see him, you’ll immediately know why he is being compared to Antonio Banderas. (To my eyes, his beauty and grace make Banderas look like a pale imitation). Our initial vision of Jose as an Adonis ready for his entrance into the spotlight ends abruptly when something terrible happens, and he is left a shell of a man. The soccer career that had been Jose’s destiny becomes the life he leaves behind, and by the time we get to know him, he’s just a cook in a restaurant owned by his older brother Manny (Manny Perez, oozing Mexican machismo).

Jose retreats from life with as much steadfast intensity as Juliet Binoche did in Krzysztof Kieslowski’s “Blue.” Throughout most of the movie, his face is covered with a full beard, his hair is long, and you can barely see him through that black mane. He doesn’t want to be seen. He wants to be invisible; he wants to be nonexistent. And just as Kieslowski did with Binoche’s character in “Blue,” director Alejandro Gomez Monteverde sees Jose as a means of contemplating how to live with the sorrows of life, the inevitable tragedies that come to us all sooner or later. And like Kieslowski, Monteverde reaffirms the power that life has to pull us back from the depths of sorrow, a power that comes from the solace we find in our own humanity.

We see Jose hiding from life in the kitchen of his brother’s restaurant, barely raising his head from the stove. Enter Nina (Tammy Blanchard, in a relaxed, realistic performance). Nina is a waitress in the restaurant who has just found out she’s pregnant. Because this is the third time she’s been late for work, Manny fires her, and in a fit of compassion, Jose leaves the kitchen to try to console her.

The rest of the movie is the day they spend together, talking, getting to know each other, walking the streets of New York and then traveling to Jose’s parents’ house in the New Jersey suburbs. Spending time with Jose’s kind and loving family disarms Nina and she opens herself up to Jose, who in turn tells her of the tragedy that marked his life.

The most poignant scene in the movie, the one that left me in tears, is when Jose and Nina go to the beach after dinner, and in this dark empty landscape, Nina confides to Jose about her own unhappy past. With the two of them sitting on a beach all alone at night, one could easily see this movie devolve into a typical love story, where two damaged people become whole and functioning again when they fall in love. But Monteverde has other, deeper concerns on his mind. This is not a love story, but a story of recovery, and survival. The relationship between Nina and Jose is more vital than that of lovers—they are helping each other find a way to fill the holes in their souls. The scene is a moving expression of confession and comfort. By its end, the camera hovers over these two people like an angel from above, as the two lie in the sand next to each other, earthbound but looking for a moment like they’re suspended in space. It’s a grand cinematic moment, and Monteverde pulls it off without flinching from the higher sentiment it evokes.

Monteverde’s exploration of sentimental experience is aided not only by his courageous cinematic choices, but also by the brilliant performances from virtually all the actors. They are the ones who figured out just how far to go without letting their characters lose dimension and shading. Tammy Blanchard, especially, is a marvel at keeping her character grounded in her own sad, tough girl persona while still getting swept up in Jose’s family’s embracing of joy and love. As Jose, Eduardo Verastegui found a way to be penetrating and soulful without relying on his obvious sex appeal. With that magnificent face covered by a beard for most of the movie, and the camera rarely lingering on those piercing dark eyes, Verastegui must compel us with what’s left over. And what he gives us is a striking performance, one that is both dynamic and minimalist at the same time. This actor not only has the looks of Banderas, but the intensity of Russell Crowe. If nothing else, go see “Bella” to see Verastegui. He is mesmerizing.