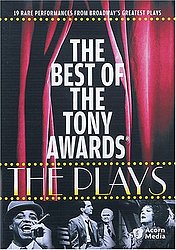 The Best of the Tony Awards®-The Plays consists of short excerpts from 19 dramas and comedies that have been performed live on Tony Awards® broadcasts between 1969 and 2001. After an initial prologue by Harvey Fierstein, the two to three minute clips are presented, in no particular order, each preceded by brief narrative introduction that “sets the stage” for the piece.

There are some standout performances from some beautifully written plays. Maggie Smith, in the 1990 Broadway production of Lettice And Lovage, is magnificently outrageous. Robert Prosky and Sam Waterston excel as a Soviet and American diplomat in AWalk In The Woods. Joe Mantegna and Ron Silver make David Mamet’s dialogue in Speed-The-Plow (1988) seem genuine and spontaneous.

James Earl Jones appears in two clips. He is masterful in a moving and dramatic scene as a stern father teaching his son a painful lesson in Fences (1987). It is interesting to contrast Fences with his much more youthful piece, The Great White Hope (1969), with Jane Alexander, although the poor audio/visual quality detracts from the dramatic effect of that excerpt.

It is fitting that the last piece is Morgan Freeman’s poignant recital of the famous speech, The Seven Ages of Man, from As You Like It (1990)…the one that begins “All the world’s a stage…”

All the actors are performing for a very appreciative and admiring audience and they seem to thrive on it. Some of the excerpts stand on their own more easily than do others, and performances vary, but I am glad that I saw all of them. Those who have never seen these plays, or haven’t had the opportunity to see these fine actors perform live, should find this slice of theater history interesting and entertaining. For those, like me, who were fortunate enough to have seensome of these actors play their roles in the original Broadway productions, this DVD may evoke a wisp of nostalgia.

There is also a small “bonus extra” of original Playbill® cover art and some cast lists from the plays. This is indeed a small extra, except perhaps for the few theater buffs (like me) who collect and save their Playbills®.