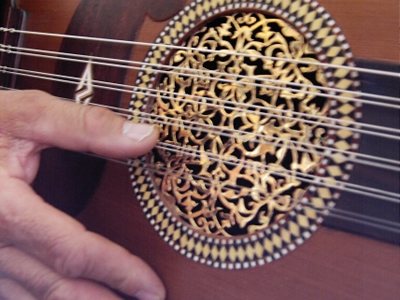 You’d never know from watching American TV that the largely Islamic Middle East has any culture, save that of the gun and the bomb, and many commentators, both right and left, have said that the Islamic world has no music. Period. Which is astonishing when you consider the fact that Arabic music predates the arrival of Islam in the 7th century CE, and is one of the oldest, richest, most sophisticated, and complex traditions on earth. But why should our skewed take on it surprise? We live, after all, in the world of Marcuse’s one dimensional man, and Guy Debord’s society of the spectacle, where everyone and everything is a commodity, and/or entertainment. And the version of Islam expounded by writer Bernard Lewis, who coined the term ‘clash of civilizations’, has become the gospel of the Bush regime, for which he’s an inhouse, and no doubt, highly paid propagandist. And though many will see Florence Strauss’ documentary as just a bland plea for tolerance I think it does something even more important by just opening a window on a world few Westerners know. And opening a window on the stifled room we’re forced to live in by our ignorant media is just what the doctor ordered.

The film proper begins in Tel-Aviv , settled since at least the 14th century BCE, and formerly Arabic Yafo, Palestine’s cultural capital before the ‘ 48 war. It was on March 10th of that year, when 750,000 Palestinians were driven from their ancestral homeland, and this ancient land was broken into unequal parts. The film’s first extended scene, whether consciously or not, mirrors the Palestinians’exile, for gathered in this Tel Aviv apartment are Iraqi Jews, who emigrated to Israel in the 1950’s, leaving their cherished land behind, but not its music, or their attachment to it. The musicians, who include Yair Dalal, Iman, Avraham Salman, are argumentative, lively, charming, and the crustiest of the bunch, Salim Al Nour, turns out, as so often in life, to be the one who seems to have the biggest heart. And heart is what this film is after, though not in a sentimental way, and it succeeds in showing why this music means so much to so many. It’s also a personal journey for its Paris-based director, who’s the granddaughter Robert Hakim, who sometimes in tandem with his two brothers, produced films like Antonioni’s L’Eclisse ( 1962 ), and Bunuels’s Belle de Jour ( 1967 ), and who covered up his Egyptian roots when he emigrated to France, where Strauss had many Muslim friends who piqued her interest in what she didn’t know. Her chief on camera guide is Paris-based, Persian-born, Syrian -raised baritone and scholar of Islamic music, Abed Azrié, whose multiple ancestries, if you will, appear to add to his understanding of this music’s depth.

And deep – when was the last time you heard that word? – it most certainly is. Some of its expressive force came in the last century from the phenomenal voice and charismatic power of Egyptian diva Um Kulthum ( c. 1898-1975 ), and matinee idol handsome singer-oud player Abdelwahab ( 1907-1991), both of whom are seen in telling clips. And Strauss’ interviewees, largely musicians, as well as artists like Egyptian photographer-filmmaker, Ayman Khoury, stress the deeply spiritual connections this music, whether Islamic, Juadic, or Christian, seeks to forge between the human and the divine. Kulthum learned the Qur’an as a child, and its inflections, whether melodic, or dramatic, infuse her art. It, also seeps into the work of other singers here, like the deeply intense Fatma Al Ganayi singing Zakariah Ahmad’s addressed to God “Biridak ya Khaliqi” – “ when you created me / you created my voice,” the cantor Moshe Khavusha adopts Arabic inflections into Hebrew, the Egyptian Coptic and Aramaic – Syriac Christian choirs, and the Sufi ritual music sung and performed by the muezzin of Aleppo, Syria’s grand mosque, Hassan Haffar, and his musicians, and even more amazingly, by an Egyptian village band, with their audience, of all ages, sizes, looks, twirling in silent ecstasy before God. This is the union Azrié speaks of throughout this quietly beautiful film. It happened all too briefly of course in the intermarriage that was Andalusia, before Isabella La Catolica came and broke it up. But you can find most of those broken pieces here. And if you’re not moved there’s something wrong. Or, as Kulthum sings at one point, before a huge crowd – “ Why am I languishing when the world surrounds me? “ We’re in paradise, if we only see. And hear. And this remarkable film lets us in on that simple, but far too overlooked truth.