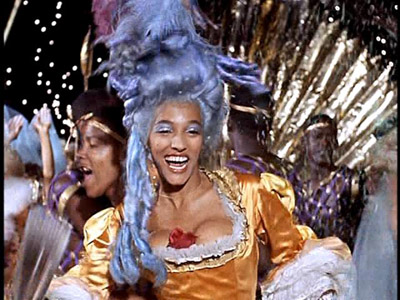 Marcel Camus’s 1959 French film, Black Orpheus (Orfeu Negro), made in 1959, in Portuguese, is by no means a great film, but it is a landmark film; an odd amalgam of modernity and the worst stereotypes about black culture worldwide. The whole film is practically one long festival of song and dance, which while apropos for the setting- Rio de Janeiro’s Carnival, nonetheless kills off any hope for a real story. Yet, despite the dancing, singing, and merrymaking, it is not a musical, per se, and quite a bleak film, in that it reinforces the notion, however true, that poverty is something that no amount of merriment can deny.

Based upon the mythic love of Orpheus and Eurydice, and Vinícius de Moraes’ musical play Orfeu Da Conceição, it is a huge leap upward from the so-called Orphic films of Camus’s countryman Jean Cocteau, yet it is ultimately a tale that it all fluff and little meat. It is not great cinema, but it is great entertainment. That this foreign equivalent of the staid Hollywood musical format has such a high international reputation owes far more to the biases against Hollywood than to any real positive qualities this film has. Its landmark status as a film derives from its bringing the bossa nova beats of Latino music to the world stage. Imagine if the 1990s craze, The Macarena, had been featured in a film, and you’ll have an idea of the impact of this film.

In truth, the real and only star of the film is the music, whose soundtrack was written by Antonio Carlos Jobim and Luis Bonfá, and the vivid- no, gorgeous, colors. This is one of those films meant for color. It would simply not have been the same in black and white. Black Orpheus won the 1959 Cannes Film Festival Palm D’Or Grand Prize as well as the Golden Globe and Academy Award for Best Foreign Film. Camus and Jacques Viott wrote the screenplay, what little of it there is. In a sense, the whole plot of this film is just an excuse for the wonderfully infectious music, making this film, arguably, the world’s first music video, over two decades before the dawn of MTV. The film’s two main theme songs, Manha De Carnival and O Nossa Amor, became international hits. Before this film only Hollywood musical numbers took off in the public’s consciousness, but as they were all based on Broadway tunes they already well known. Perhaps only the zither music of Anton Karas, in the 1949 film, The Third Man, had as big an impact previously. However, as memorable as that great film’s scoring was, it never moved people the way this music does.

The Orpheus (Breno Mello, a real life soccer star) of this film is a trolley car conductor who is a legendary dancer and crooner in the cliffside Babylonia slums of Rio. He is the sort of guy that everyone knows, every girl loves, and who can commit to nothing in life. His next door neighbor is a wacky girl named Serafina (Léa Garcia), who waits for her dumb as a post sailor boyfriend Chico (Waldetar de Souza) to return from sea, and whose cousin Eurydice (Marpessa Dawn, a dancer from Pittsburgh, Pennsylvania, who looks amazingly like a younger, prettier Phylicia Rashad from The Cosby Show sitcom) is coming to visit her to escape a mysterious man she claims wants to kill her.

Whether or not the man (Adhemar da Silva) is really a personification of Death, or just a homicidal stalker we never find out. We only see him in a costume of death that resembles some black alien Spider-Man outfits, and he wears a skeletal death mask, to boot. Orpheus falls in love with the country girl for no apparent reason save her name and beauty. Of course, he’s already engaged to a gorgeous wasp-waisted harridan in the making named Mira (Lourdes de Oliveira). That two such gorgeous women should fall for the same guy would be any man’s fantasy, but, in true melodramatic musical fashion, trouble abounds.

In the end, Eurydice falls for Orpheus, switches places with Serafina as dance partner for Orpheus, and Death- driven away once before by Orpheus, reappears. He chases Eurydice through Carnival, as the jealous Mira also chases and fights with her, wanting to kill her. Orpheus’s wise old co-worker at the trolleys, Hermes (Alexandro Constantino, in the sort of wise old Negro roles Morgan Freeman has recently patented), messenger of the gods, in myth, tells Eurydice to hide at his home, and he will get Orpheus for her. Death chases her through the trolley car hangar, but she escapes, and dangles on a wire as Orpheus finds her. He is the one who turns on the lights, thus electrifying his lover to death.

Death smites him, and when he wakes, he runs off in search of Eurydice. He looks for her body all over the city, including a hospital, is taken to the Underworld of an umbanda cult’s drug induced dancing, and hears Eurydice speak to him through a fat old lady. Despite her admonitions against it, he turns around and she is gone. He calls the cultists liars, and later finds her body at the morgue, and seemingly superhumanly walks away with it, and back many miles up the cliffside to his home. There, the jealous Mira sees him holding his dead lover, runs toward them, clocks him in the skull with a rock, and Orpheus and the corpse tumble over the cliffs at morning, and he dies. Seeing this, the two young boys Benedito (Jorge dos Santos) and Zeca (Aurino Cassanio), who idolized Orpheus through the film, and listened to him tell of his duty to raise the sun every day with guitar playing, take his guitar, and play to raise the sun in his place. Zeca thus becomes the new Orpheus- as Orpheus told them someone would, and a cute little girl, possibly Zeca’s Eurydice, dances with the two boys in the morning.

In myth, Orpheus was a great poet and singer, son of the god Apollo and Calliope, a Muse, and Eurydice a great beauty who was bitten by a snake, and died. This film infuses some of the myth, but most of it is heavyhanded symbolism, such as the hospital dog at the Bureau Of Missing Persons being named Cerberus. That the use of the myth as a marketing tool was foremost in the minds of all involved is manifest, for the leads could have as easily been called Tristram and Yseault or Romeo and Juliet, and much of the symbolism that seemed apt for Orpheus and Eurydice could be tweaked to fit those lovers’ stories.

Camus used an unprofessional cast and it shows in many scenes. Yet, one does not watch a film like this for the acting. Serafina and Chico, especially, act in a racially stereotyped manner that induces cringing. Hers is overacting and his is mute idiocy. There are scenes of animalistic lust between Chico and Serafina, and one where she smooshes a big slice of watermelon into his craw. There are terrible scenes that simply would not be seen today, for they do play to the worst racial stereotypes, with Brazilian versions of Aunt Jemima, coons, and Stepin Fetchits that abound. The constant dancing and gaiety of the mainly black cast is also not conducive toward showing them in a positive light. Fortunately, these are only small and fleeting annoying diversions from the music, and in the film’s 107 minutes they stick out only for their dated silliness. They can be forgiven on that score, and also by the fact that, compared with what American black actors- save for, perhaps Sidney Poitier, had to suffer through in that era, this film was ahead of its time.

Part of what makes the film seem almost modern, though, is the open sexuality on display in the film. Mira, for one, never misses a chance to show off her fabulous figure and shake her ample bosom. In one scene of her dancing we can even see her stiff protruding nipples, and no man can deny he would have liked to have seen her have a ‘wardrobe malfunction’. Also, for most of the film Orpheus is walking around topless, showing off his buff, athletic physique, and even his taut, muscular legs from years of soccer. There are also early scenes of the city where Orpheus is driving his trolley and the look of the skyscrapers and vehicles of Rio is thoroughly modern.

The DVD, by The Criterion Collection, is pretty bare bones, although the restoration job is superb, especially as regards the color. There is the original French trailer, and thankfully the DVD comes with an English dubbed soundtrack. The only times the original Portuguese appears, with subtitles, is in two scenes that were cut from the American version of the film, although the DVD does come with English subtitles as an option. There is an insert with an essay by film critic David Ehrenstein. The film has a strange quality of being both surreal and cinema verité, even as the cliffside shots of the sea are stunningly lush. It is apt that the film ends both poetically and realistically, with the dancing children blissfully unaware that poor people, such as themselves, almost always end up living and dying pathetically, as did this Orpheus and Eurydice. None of the actors ever went on to star in anything even remotely as successful as this film, and neither did Camus, a filmic one hit wonder whiz kid, although his ‘hit’ was hardly high art. Despite that, Black Orpheus, while not being a cinematic full meal nevertheless is a sweet piece of candy, and thus has to be judged more on its entertainment value than its artistic value; mindful that, unlike the Orphic films of Cocteau, it, at least succeeds on one level, however lowest common denominator that may be.

Cosmoetica: The Best In Poetica

(9688)
$6.94 (as of January 25, 2021 - More infoProduct prices and availability are accurate as of the date/time indicated and are subject to change. Any price and availability information displayed on [relevant Amazon Site(s), as applicable] at the time of purchase will apply to the purchase of this product.)

(20901)
$7.99 (as of January 25, 2021 - More infoProduct prices and availability are accurate as of the date/time indicated and are subject to change. Any price and availability information displayed on [relevant Amazon Site(s), as applicable] at the time of purchase will apply to the purchase of this product.)

(6753)
$9.48 (as of January 25, 2021 - More infoProduct prices and availability are accurate as of the date/time indicated and are subject to change. Any price and availability information displayed on [relevant Amazon Site(s), as applicable] at the time of purchase will apply to the purchase of this product.)
related posts