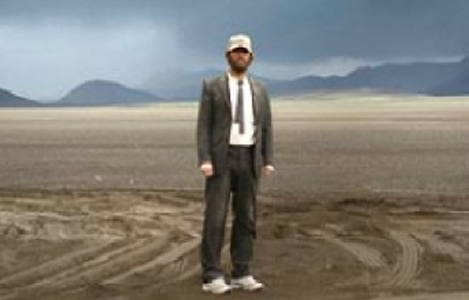 One of the hard things about doing social criticism and satire is that the audience wants either thought-provoking insight or some exhilaratingly new way of presenting old ideas. Therefore it’s quite remarkable that Norwegian director Jens Lien’s second film, which hasn’t a fresh insight or a new approach, somehow engages and delights us. Its critical jab consists of assailing modern, middle-class industrial societies as bland, boring, vapid, emotionless, superficial, and materialistic. Sound familiar, even clichéd? This critique was already becoming tired by the late 1960’s. And having it expressed through a sweet and hapless everyman who wants some soul and spice in his hum-drum life is equally stale. And yet The Bothersome Man has such technical virtuosity, perfect use of music, stellar performances, and enough black humor to make it a treat.

Our protagonist, Andreas, is dropped off by bus at a gas station in Middle of Nowhere, Norway. A man greets him warmly, drives Andreas to his nice, new, antiseptic apartment, and tells him that he starts work tomorrow as an accountant. The next day, warmly greeted by his nice new boss at a nice, clean and shiny new building, Andreas is given a nice office, manageable work, and introduced to nice, warm, happy co-workers. Socializing with them outside of work, he finds them equally happy with their nice, private lives. Andreas has clearly stumbled into a community of Stepford wives and husbands or the town where people were replaced by robotic clones in Invasion of the Body Snatchers. Everyone Andreas meets is blandly friendly, cares only about appearances, enjoys routinized, emotionless sex, and reserves their deepest engagement for re-decorating and acquiring ever-new consumer goods. The food has no taste, the booze can’t get you drunk, there are no roads out of town, and as in Groundhog Day, even suicide isn’t an escape. Welcome to 1950’s hell.

How did Andreas get here? Why is he here? What happened to the "real world?" These questions aren’t answered, and not even really asked. Presumably they don’t need to be, because this world is but the logical extension of the "real world." But Andreas yearns for more. He doesn’t just want sex, he wants to fall in love. He doesn’t just want to enjoy a film, but to be touched by it and capable of tears. He wants to hear music that cuts deep into his shrunken soul. And he is determined to find a way out of this life without exit.

Normally, the banality of this critique makes me reach for a Big Mac and yearn for a night with the wife watching Movies on Demand at a Holiday Inn. But someone forgot to tell the director to phone this one in. And so he simply went out and made the most visually stunning film of the past few years. He may not move his camera as well as Scorsese, but he sure knows when to keep it still. Early images evoke the way John Ford shot his beloved Monument Valley. Like Mike Leigh at his very best, Lien frames his shots like a photograph, perfectly choosing when and how to place his actors. And it’s not just camera placement and movement, but also his exquisite use of lighting and set design that reinforce the flat and emotionally arid textures of this world.

And then there’s the music. For long stretches there is none. Then he might use 1940’s songs or more modern melodies to reinforce the emotion of a scene, but also at times to cut against it. Given that only Andreas has three dimensions, it may seem odd to praise the performances. But at least one of the emotionally-challenged characters interestingly suggests a humanity buried deep within her. And Trond Fausa Aurvag as Andreas is poignant, funny, annoying, sweet, hero and victim- and touchingly convincing when inhabiting each of those facets of his personality.

The Bothersome Man was nominated for Norway’s Academy Award for best film and best supporting actress. It won the award for best director, actor, and screenplay. It will have a limited theatrical release and also be available on DVD from www.filmmovement.com . It has almost nothing new or especially interesting to say. But its clichés are dazzlingly conveyed; its dark humor keeps us fully engaged. And you want to see this just to watch a young master at work. Jens Lien is simply the best new director of the last few years.