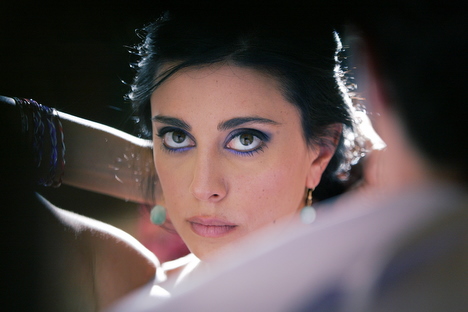 In Paul Thomas Anderson’s epic movie about men and power, There Will Be Blood, there is hardly a woman in sight. There is barely even a single thought about women—no longing or regard—during the 30-year span of its narrative. Caramel, on the other hand, is all about women, but unlike the men who populate the oil fields of There Will Be Blood, the women of Caramel have men never very far from their minds.

Ah, yes, womenfolk. As a carrier of that extra X chromosome myself, I never tire of films about women, and Lebanese director Nadine Labaki, in her film debut, gives us an enchanting portrait of the feminine world. Caramel is a warm, funny and compassionate movie that examines five women who are at very different stages in their lives, each one with a particular problem to work out. Labaki treats every one of these women with understanding and respect. She also cast non-professionals in four of the roles, and the movie’s charm is in part due to just how real these women seem. The five women all congregate at a beauty parlor run by two of them, and their stories unfold as they go about the business of cutting hair, painting nails and waxing bodies with the caramel mixture the film’s title refers to.

As a Lebanese version of Sex and the City, Caramel doesn’t shock with candid sex talk. In fact, a lot of the problems the women face are barely talked about at all. This is Beirut, after all, and even though the women are westernized, somewhat emancipated, working women, they are still bound by their culture’s restrictions. Director Labaki works around these restrictions, using comedy and mere suggestion to get at truths that Lebanese society otherwise keeps locked up. Her goal is not a polemic against the male-dominant Arab culture she lives in, anyway, but a valentine to its women.

In fact, in many ways, the women of Caramel are not that much different from the women of, say, Topeka, Kansas. There’s Layale, hopelessly involved with a married man who will never leave his wife, and Jamale, a woman somewhere in her forties whose husband has left her for a younger woman. Jamale is so hell bent on not growing old that she refuses to admit she’s going through menopause. She’s also pursuing an acting career, and has to suffer the humiliation of competing for tiny roles in commercials with women half her age. And there’s the heart wrenching Rose, a 65-year-old seamstress who never married, and who thinks her days of finding romance are over until a silver-haired gentleman steps into her shop, and gives her false hope. These stories sound so familiar; they could easily be stories set here in liberated America.

Still, Caramel contains a few notable signs that we’re not in Kansas but an Arab country. One of the women, the hair washer Rima, finds herself attracted to one of the beauty parlor’s clients, but her budding lesbianism is never discussed, or even acknowledged, by herself or the others. This would have been given the full treatment in an American movie, not just the wash and rinse that Rima indulges in. And then there is the particular “problem” Nisrine faces as she prepares for her wedding day—she doesn’t want her fiancé to find out that she’s not a virgin. It turns out there’s a surgical procedure to reattach the hymen—the Stromboli stitch—that is still a common practice in Arab cultures, and the women all band together to support Nisrine when she decides to have it done.

This may be a shock to western women, but how far away are we really from that kind of societal pressure? Isn’t a face-lift a similar form of mutilation for acceptance? I can just imagine the gals in Sex and the City gathering around the bruised-face Samantha after surgery, making jokes as easily as they reserve judgment.

Caramel’s greatest pleasure is also its main story, which centers around Layale, the one having an affair with a married man. We never see this man she is so obsessed with, but we get to see a lot of Layale, who is played by the film’s director. Nadine Labaki’s face is a spectacular specimen of Middle-Eastern beauty, and fortunately for us, she allowed the camera to linger on it often. Her huge dark eyes are heavily lined to accentuate their beauty, but unlike Penelope Cruz’s eyes in Volver, they don’t glare with fierce determination, or militant rebellion, like the eyes of a Nefertiti or a Cleopatra. These eyes instead reflect the melancholy of unrequited love.

And this is how Caramel differs so fundamentally from Almodovar’s vision of womankind. In Volver, the men are bastards, and the women are better off without them. In the feminine world of Caramel, men are not the root of all evil. They may not be worth much more than being tolerated or teased, but they are definitely not to be dismissed. Women may act like fools because of men, but that doesn’t make men the culprits. Love is not the problem, and getting rid of men is not the answer.

In fact, it wasn’t Almodovar who came to mind as I started writing this review, nor was it Sex and the City. It was another film of mostly women, Steel Magnolias. Set in the American South in the 1970s, this movie is also about a tight-knit group of women who congregate at a beauty parlor. Unlike the pent-up, stiff-upper-lip Puritan quality of their Northern neighbors, these Southern women show that same extroverted quality that Caramel’s women do. They wear their hearts on their sleeves, and they rely on each other in tough times, and enjoy each other’s company in good times. They may not be at the forefront of the women’s lib movement, but they take care of their own. Both movies are testaments to the strength women give each other. We may want men in our lives, but in the end, it’s not the men we need to get us through.