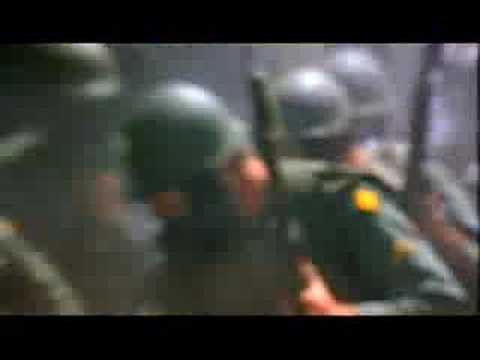 By the summer of 1968, the Tet offensive in Vietnam had shown that the U.S. was losing the war, Lyndon Johnson announced that he would not seek re-election, Martin Luther King had turned against the war and been assassinated, Bobby Kennedy, who had a serious chance of becoming president on an anti-war platform, had also been assassinated. Frustration with Vietnam was at an all-time high, and the size and militancy of the anti-war movement convinced some radicals that revolution was possible. Moreover, radical change seemed global- anti-imperialism movements were shaping much of the third world, the Czechs were creating an alternative "Spring" to Soviet-style Communism, and French students calling for a general strike were joined by ten million workers (honest…10,000,000). The mood of American radicalism would play itself out that summer at the Democratic Party’s national convention in Chicago. The drama of a weeks worth of confrontational demonstrations and the obscene over-reaction by the police was subsequently matched by the trial of seven activists charged with "conspiracy." It was to be the most dramatic criminal trial of the decade.

Brett Morgen, one of the directors of a deliciously fun documentary on movie mogul Robert Evans- The Kid Stays in the Picture– has enormous ambitions for his new film. He has no real interest in chronicling 1968’s violence in the streets or the subsequent trial. Rather, he wants to use them as a kind of agit-prop to inspire today’s youth to rally against the war in Iraq and other iniquities in America. But the task is beyond him, and the many fascinating aspects of his film never cohere into either a compelling story or compelling propaganda.

The trial is usually known as "The Chicago Seven," referring to the seven white defendants, including Yippie co-founders Abbie Hoffman and Jerry Rubin, SDS heavyweight Tom Hayden, and legendary pacifist and anti-war activist Dave Dellinger. Co-founder of the Black Panther Party Bobby Seale also was indicted, but chose to represent himself, and after refusing to stop challenging Judge Julius Hoffman was literally bound and gagged in his chair for the duration of the proceedings. Morgen adds Seale and the two defense attorneys, William Kunstler and Leonard Weinglass, into the mix as they were given contempt sentences- hence "The Chicago Ten."

Morgen frames the film around two wonderful conceits. Cutting back and forth between the trial and the previous events in Chicago during the convention, we glimpse the chaos in the streets that lead to the circus of a trial. For not only was the only black defendant bound and gagged, but the Yippie defendants made certain that the judicial proceedings would be theatrical- donning judicial robes themselves, making outrageous comments to the judge, jury, spectators and press, and using the solemnity of the occasion for joyous, funny, and biting commentary. The chaos in the courtroom came to mirror the chaos of that previous summer. And the outrageous over-reaction of the Chicago police was mirrored by the presiding judge who insulted lawyers and defendants, at times even turning his back on them, and generally lost control of his own courtroom.

The second creative idea was combining conventional film footage of the chaos in the streets with courtroom sequences done in a rich animation style (think Polar Express). This makes the trial appear like a comic book, and makes the unfolding absurdity of the event seem even more surreal. What’s more, every outrageous moment and spoken word is taken directly from the trial transcript.

But Morgen’s film suffers from two fatal flaws: prosaic story-telling and political naivete. He not only jettisons conventional historical narrative, but also any concern with a narrative. The wonderful idea of the parallel tales of the streets and the courtroom becomes enervating. We spend a day in the trial and then flash back to a day in the streets. But nothing builds. No attempt is made to illuminate themes or motifs in the two venues. We never get a sense of events moving in a direction, with concomitant tensions and anxieties. Days in the streets of Chicago seem to blend together into repetitive demonstrations that convey nothing beyond the brutality of the police. At the trial there’s no sense of a strategy or tactics, and so developments there seem aimless, punctuated only by Abbie Hoffman’s anarchic interjections. Morgen boasts of eschewing conventional, historical documentary techniques, but he threw out the baby with the bathwater. Without any idea of how to harnass a story from specific moments, the structure just seems repetitive and induces lethargy.

It’s impossible to separate Morgen’s contempt for conventional narrative from his simplistic political agenda. Besotted with the undeniable charisma of Abbie Hoffman and the fervor of anti-war activists, his political methodology is reduced to a highlights reel from that summer and that trial. His film revolves around the erroneous premise that being shown inspiring activists rejecting a bad war will somehow inspire young people in contemporary America. But in the Summer of 1968, the leading anti-war candidate had just been assassinated. Today, he’s about to be nominated for President. Unpopular as the war in Iraq certainly is, it’s not being fought by conscripted soldiers, which was a huge element of the Vietnam anti-war fervor. Moreover, those opposed to the Vietnam war knew what they wanted, and it was easily articulated: bring our boys home tomorrow. Given the situation in Afghanistan, terrorists in rural Pakistan, Iran flirting with nuclear weapons, let alone what obligations we owe to those Iraqis who have risked their lives to help us- almost no Americans are in favor of bringing our men and women home tomorrow. We want the war ended ASAP, but it’s very complicated and confusing how that interfaces with other moral obligations and appropriate actions to fight terrorism. Being against the war in Iraq doesn’t lend itself to simple solutions or even simple slogans. Chicago Ten lacks a compelling narrative and thoughtful ideas on what it would mean to inspire young activists in 2008. So, even the joy of watching the sweetly engaging Abbie Hoffman can’t save this well meaning but disappointing film.