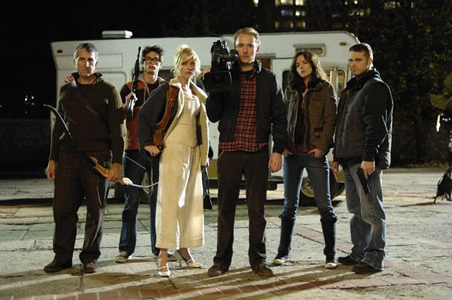 Forget the movie’s opening “news” footage of pasty-faced dead people getting up, staggering around, and biting everyone in sight. What truly tips the viewer off that Diary of the Dead is science fiction is the fact that early in the movie we’re watching student filmmakers shoot a mummy rather than a zombie film. The story takes place in a universe where George Romero never made Night of the Living Dead and where the popular conception of menacing corpses is still bandage-wrapped Egyptians staggering after fleeing, negligee clad heroines.

It’s hard to blame Romero for modestly omitting his own impact on horror cinema from the movie within his movie, but it’s still a jarring note in an already slightly clunky film. The clumsiness of Diary of the Dead does not lie in the cinematography, which is fine, even though it is ostensibly shot by amateurs. Romero gets around the pitfalls of this approach by making his characters film students who already know how to handle cameras, and so shaky-cam induced motion sickness among viewers is kept to a minimum. Nor is the level of gore a problem. Blood, guts, and wet, munching noises are to be expected in this genre. What undermines the movie is a streak of moralizing undercutting the humor that’s a vital ingredient to any good zombie flick.

young people who just happen to have video cameras at the ready to record the disintegration of society. In this case, news about the recently dead rising and wreaking havoc reaches some students who are shooting a college project – a low budget horror film of course– one evening out in the woods. The lead actor, still dressed as a mummy, takes off for his family estate with a blonde, the rest, along with their ever-so-British alcoholic middle-aged instructor, pile into a van and head back to the campus in Pittsburgh. The filmmaker, Josh Close as Jason Creed, makes it his mission to document the unfolding chaos.

Unfortunately, Romero was not content with allowing his audience to watch and draw their own conclusions. The film is narrated by Jason’s girlfriend Debra, played by Michelle Morgan, who delivers her commentary in the slightly luded out monotone typically used by Harrison Ford in his ”thinking man’s action movies.” She becomes a humorless, self-righteous presence, undercutting the satire by hectoring Jason about the ickiness of documenting mayhem and offering grim, not especially earthshaking commentary on the omnipresence of video cameras in modern society. It’s like watching a Romero film while sitting next to someone who hates zombie movies and who keeps sighing, groaning in disgust, and glaring at you for laughing at the funny parts.

In spite of this, there is a lot here for Romero fans to like. Truly entertaining moments include a very brief encounter with a gleeful biker looting an empty dormitory and a sequence with a helpful, scythe-wielding Amish farmer. There are flashes of intelligence that make the film appealing. The embittered teacher, played by Scott Wentworth, turns out to be the voice of rational and protective adulthood, every now and then firmly stepping forward and taking control. The students’ encounter with an enclave of African Americans who have taken over a town abandoned by the more affluent and mobile residents is a timely echo of Hurricane Katrina. And of course, there are cameos, with horror luminaries like Wes Craven and Stephen King providing the voice of newsreaders, and an appearance by George Romero himself. All of the classic zombie film elements are in place.

It’s just too bad the moralizing had to be included. Audience members should perhaps respond to the narration the way they would to an obnoxious heckler. You can’t, unfortunately, report a character in the film to the usher and have her thrown out, but you can keep your eyes on the screen, mutter, “oh, do shut up,” and just enjoy the movie and the popcorn.