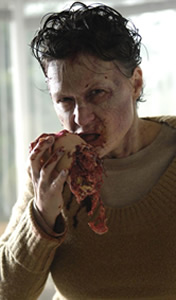 On February 14th, I had a brief telephone conversation with George Romero, the man who essentially invented the modern zombie movie. We discussed his latest film, Diary of the Dead and the movie that started it all.

PFT: With Night of the Living Dead you launched an entirely new genre of zombie films, and, with Dawn of the Dead, a tradition of satire in such films. Diary of the Dead seems to be continuing this trend. But much of Debra’s commentary, which deals with the moral issue of filming gore, seems to be taking aim at your own fans.

GR: I don’t think I’m taking a shot at my fans. What I’m trying to talk about with this film is that we have all become captivated by the media. We’re invited to be reporters. Wolf Blitzer is inviting anyone in Arkansas who sees a hurricane outside their window to take pictures of it. As for putting social satire into my films, that’s really what I’m about. It’s my schtick and I think it’s a great place to be.

There aren’t many people who are able to work in a genre that you love. I grew up on EC Comics and horror films. I love the genre and what I’ve been able to do is use it to chronicle what’s happening in the world. I’m doing snapshots of our time. I might ask questions, like, “are we doing the right thing or the wrong thing,” but I don’t answer them.

PFT: You don’t actually give an explanation in this film for why the dead are suddenly rising. Do you have any idea in mind about what causes the dead to rise, or do you consider that question beside the point?

GR: My rules are that everyone who dies comes back from the dead. I don’t give a damn why. It’s like what causes a hurricane. Some weather analyst can tell you how it started, but what does it matter? What does it matter to the people in New Orleans what caused the hurricane? The question is how do you deal with it? How do you solve it? In the very first film (Night of the Living Dead), I had three explanations given over radio and TV. Two were edited out, one was in was left in because we went to Washington DC to do it and it had production value. After that, every TV Guide description of the movie said the rise of the dead was caused by a returning Venus probe. “God changed the rules on us,” is enough for me.”

You know what, everyone has asked me that, but I don’t think about a sequel, ever. When I first made Night of the Living Dead, the thing that bothered me most was, the only reason to do horror or fantasy and something that upsets the applecart is to upset the applecart. But there’s this unwritten law that you have to set the applecart back up again and make everything okay.

PFT: You didn’t actually use the word “zombie” in the film that started it all. Did you still have “zombies” in mind?

GR: When I made the first film, no, I called them flesh eaters, ghouls. I never thought of them as “zombies.” There was an article that suddenly appeared three years after the film that was released in Cahiers Du Cinema that used the word and I thought, “Hey, maybe they are! Maybe that’s what I did.” Since then, video games and comic books and other forms have popularized this creature. It’s like vampires. I half expect a zombie to show up on Sesame Street.

I don’t know that the zombies mean anything. In my mind they don’t. It’s my ticket to ride. If I want a movie deal I have to say “the dead’ somewhere in the title. Once that’s in there, I can do anything, so I’m using this formula. I almost feel like Diary of the Dead is Airplane 5. If they nuke Philadelphia next week I can glom zombies on it and make a movie deal.