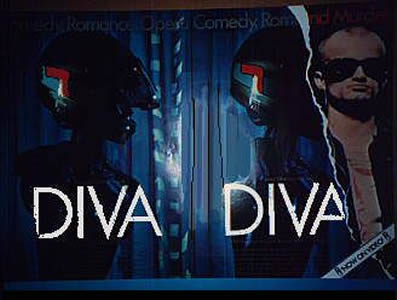 When the French cult film “Diva” came to the U.S. in 1982, it was like nothing anyone had ever seen before. It was the essence of cool, but not in the way Jim Jarmusch’s “Permanent Vacation” was cool. It was French cool, with a chic visual style and a humor that grew out of a sophisticated awareness of art and movie culture.

For anyone who missed “Diva” the first time around, or was not around in 1982, the film is being re-released for its 25th anniversary. Those who decide to revisit the film will find it has aged well, and those who see it for the first time will find it as odd and unconventional, as unique and topical, as it was 25 years ago.

“Diva” was director Jean-Jacques Beneix’s bold experiment in recombining old, established movie conventions—both narrative and visual—in new and provocative ways. The film turned every aspect of film language on its head—character, plot, setting, music. Diva’s genre-mixing story of a young postal worker’s obsession with an opera singer—the diva of the film’s title—and his accidental involvement in a police investigation into a mob-driven drug and prostitution ring, was not so much a mélange as two independent plots that only barely meet at the end. It was a conscious revolt against narrative order that was groundbreaking back in the days before Quentin Tarantino came along to show once and for all just how many narrative rules can be broken.

The film’s cast of eccentric characters is as just as engagingly offbeat as it was two decades ago. Frederic Andrei is appropriately fresh-faced and sullen as Jules, the geeky teenager obsessed with opera and his Nagra tape recorder. Richard Bohringer never surpassed his portrayal of Gorodish, the sexy, wise Zen-like philosopher with a macho edge. His Girl Friday, Alba, the pubescent Vietnamese pickpocket wise beyond her years, is effortlessly embodied by then unknown Thuy An Luu. Only Wilhelmenia Fernandez misfires as the African American soprano who is the object of Jules’ obsession. Although her beauty is exquisite and her singing pristine, her amateurish performance is an embarrassment, and it ruins any potential there was for the love story to provide much-needed depth to an otherwise superficial script.

Beneix’s art direction is as eccentric and engaging as his characters. The film’s design is very much a product of the postmodern 80s; it’s a funky, imaginative pastiche of classical and modern influences, of high art and pop culture. There’s a surrealistic quality to the way Beneix combines references to other films, other genres, other cultures, other art forms, other lifestyles. The film is full of unpredictable juxtapositions that combine old world elegance, modern minimalism and contemporary whimsy. Gorodish’s apartment is a cavernous modernistic warehouse with an old-fashioned clawfoot bathtub at one end, and he sits in it while smoking Gitanes like a medieval lord, his miniskirted underage companion roller-skating blithely around him. All that’s missing is a pink flamingo.

Even the film’s chase scene, a requisite part of any police thriller, is twisted into something utterly original. Twenty-five years later, watching a boy on his moped, his head completely covered by a helmet that makes him look like he just came from outer space, being chased through the Paris subway, bouncing up and down stairs and on and off trains, is still fresh, still exciting in its unconventionality.

The most memorable aspect of Diva’s postmodern fusion is the high culture music that it co-opts into its pop narrative. The film is now synonymous with the famous operatic aria performed by Wilhelmenia Fernandez at the beginning—a gorgeous performance of “Ebben ne andro lontana” from the opera “La Wally” by Alfredo Catalani. Both that aria and a haunting tune reminiscent of Erik Satie by the film’s composer Vladimir Cosma are played in their entirety, allowing the music to take over to such a degree that is rare in cinema.

Diva’s impact was so influential that it spawned a movement in French film in the 80s—the Cinema du look. The movement was an exciting period for young filmmakers in France, and it saw the rise of two other young iconoclasts: Luc Besson and Leos Carax. Of the three, only Besson (“Subway”) has managed to have a lasting career. Beneix’s other films never matched the success of “Diva,” and Carax, whose enormous talents were evident in “Boy Meets Girl” and “Mauvais Sang,” seemed to implode from the duress of the financial debacle that stained his masterpiece, “Les Amants du Pont Neuf.”

Cinema du look wasn’t the first film movement in France to combine high art and pop culture into an innovative cinematic style. If anything, it is the offspring of another movement in French cinema that gained prominence in the 1950s and 60s—the French New Wave. The two movements have a lot in common. They were both youthful rebellions against classical form—breaking the established rules as much out of defiance and sheer youthful audacity as a search for a richer aesthetic. They both found inspiration in lowbrow subjects—pulp detective stories, science fiction, the seedy worlds of prostitution and petty crime. They often focused on the marginalized in society. And the filmmakers of both movements had their own highly individualistic stamps. Although Cinema du look concentrated more on stylistic innovation over the French New Wave’s interest in new narrative structures, both encouraged a sense of adventure, of cinematic freedom.

And so “Diva,” in a way, follows a natural progression from the French New Wave, but does it hold its own against the classics of New Wave directors like Godard and Truffaut? “Diva” is a great experiment in style, and a clever entertainment, but in the end it doesn’t add up to much more than a fun ride. Beneix shows no real interest in anything more than a showcase for his imagination. There is no depth of feeling, no real grappling with moral truths, or search for any deeper emotional resonance than the transporting power of beautiful music.

Maybe that’s why Beneix’s career fizzled out so quickly. Longevity in the movies demands more than the narrow parameters of a slick music video. But “Diva” is Beneix’s one hit wonder, and it’s worth a place of importance in cinematic history.