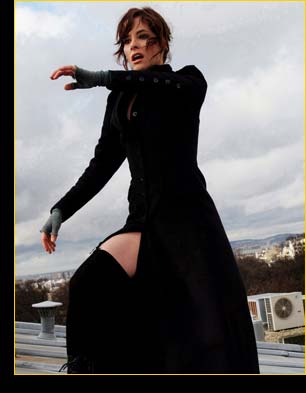 Hal Hartley returns to familiar territory with this sequel to “Henry Fool,” a film that came out ten years ago and is still considered his best work to date. Hartley fans may be disappointed in the reunion, however. “Fay Grim” does at times manage to show signs of the brilliance that marked much of “Henry Fool,” but in the end it is just what one has come to expect of a Hartley film. It is a well-crafted critique of contemporary culture that has no center, no real raison d’etre beyond the lampoon itself. Luckily, there is Hartley’s immense wit to carry it through, but wit can be a dangerous gift, especially when the capacity to be clever overwhelms all else.

As a sequel, “Fay Grim” picks up where “Henry Fool” left off. We find the same characters nearly ten years later, exactly where Henry left them when he fled the country to escape arrest. “Henry Fool” began with the literary megalomaniac Henry taking up residence with the Grim family in Queens, where he proceeded to shake the family out of the suburban stupor it was living in. He encouraged brother Simon Grim to literary fame and fortune, and he not only serviced sister Fay, but also married her and gave her a son. At the beginning of “Fay Grim,” we find out that Simon is in jail, serving a sentence for aiding Henry’s escape, and Fay is raising her son, now fourteen, all alone. Fay is a harried single mom, just barely able to live off the residuals of her brother Simon’s epic poem.

The actors have also returned to resume the roles they filled in “Henry Fool.” As Simon, James Urbaniak looks exactly like he did in “Henry Fool,” the spectacles and Samuel Beckett haircut still intact. Parker Posey, on the other hand, who reprises her role as Fay Grim, looks more beautiful than ever. With the charismatic scene-stealer Thomas Jay Ryan (who plays Henry in both films) mostly out of the picture, Posey takes the lead as Fay with just the right amount of deadpan humor and chutzpah that a Hartley film demands. It feels like Hartley was aware of Posey’s potential, her own scene-blasting charisma, and wrote “Fay Grim” mostly as a vehicle for her. And that is the best thing about the movie—getting to see just what a wonderful actress Posey is, not only for comedy (there is a great slapstick scene with Posey hurling herself off the bed in an erotic reaction to a call that comes through on her cell phone, which she has put on vibrating mode and hidden in her skirt), but for pathos as well. Posey’s face can register bafflement and sarcasm brilliantly, but her capacity to express melancholy and longing is just as remarkable. The few times Hartley offers her poignant scenes, she inhabits them with such ease that one wonders why she hasn’t taken on more dramatic roles in her career.

After adhering to a fairly traditional beginning as a sequel, “Fay Grim” immediately veers away from “Henry Fool” in just about every way possible, taking not only its characters but Henry’s opus, his “Confessions,” along with it. When a couple of FBI agents (Jeff Goldblum and Leo Fitzpatrick) come to Fay’s house to tell her that Henry is dead and that his notebooks (a literary work of mystery and ambiguous merit in the previous film) are embedded with codes that reveal top-secret information that could derail several governments, the domestic drama that was “Henry Fool” suddenly becomes a political espionage film with its scope on the international scene.

The FBI wants Fay to help them retrieve the notebooks from enemy hands, and Fay agrees in exchange for her brother’s freedom. Fay’s search for the notebooks sets off a chain reaction of plot twists that rely as much on Hartley’s skewed humor as the mind-numbing logic of the caper comedy genre that he is satirizing. In a whirlwind of explanations that characters rattle off with machine gun speed (Jeff Goldblum does a great turn spewing spy logic with his signature lassitude), Fay’s search takes her to Paris, where she dodges bullets while running across Belle Epoque rooftops, and then Istanbul, where she is blindfolded and taken to the Muslim terrorist leader who has been harboring Henry, whom everyone had presumed dead.

The reemergence of Henry (Thomas Jay Ryan reprises his role in a cameo performance) at the end of “Fay Grim” reminds us of what is missing from this film and what made “Henry Fool” so great. Hartley discovered a funnel for more serious ponderings in the Faustian character of Henry Fool; with Henry, Hartley managed to put his wit and verbal agility to better use than mere parody—his aim was more dramatic, more tragic. Henry’s appearance in “Fay Grim” only reminds us of how lacking “Fay Grim” is. The desire for gravitas is there—in the scenes involving Henry, for example, and even in Hartley’s need to kill off a major character, in front of Fay, no less—but in the end, the shift from satire to drama rings false. Despite Henry’s appearance, and Posey’s heart-wrenching look at the film’s end, Hartley never really allows the film to veer off its track of making fun into the more complicated realm of finding truth.

Hartley’s genius, his wit, may be his undoing. Unlike Godard, who is clearly a mentor—much of the humor in “Fay Grim” even recalls Godard’s own political espionage film “Pierrot le Fou”—Hartley seems to be unable to develop his talents beyond the scope of parody and mockery that have saddled him mid-career. Such an approach seemed better suited to the more intimate subjects of his early films. Now in his mid-forties, Hartley might consider tackling the weightier subjects that now pique his interest with more depth than just the deadpan comment, “Shit happens.” He seems to want to grow as a filmmaker—if only his talent wouldn’t get in the way.