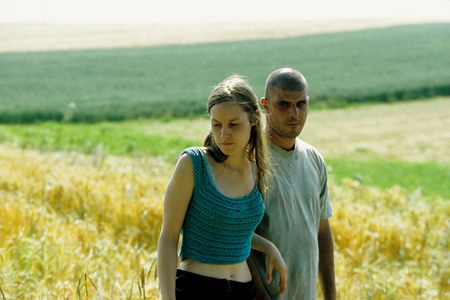 Written and Directed by Bruno Dumont

Flanders is a remarkable film, though it is not an easy film to digest. This is director Bruno Dumont’s fourth feature, and like his previous films, it contains scenes of crude behavior and gruesome brutality. Flanders is relentlessly bleak, but as it works its way into your bloodstream, the aftertaste is somewhat akin to relief. It’s like a confession. For those who allow it, Flanders offers the comfort of recognition, and acceptance, of what it means to be human.

Dumont refutes the notion of film as entertainment with a monk’s diligence. An austere stylist, he pares everything down to its essence, so that a film like Flanders almost doesn’t feel like a film at all. He uses nonprofessional actors, there is no music on the soundtrack, and there is very little in the way of a story. It’s a bit like what happens when we look at an abstract expressionist painting. It’s better not to try to understand the painting on an intellectual level, but to let it enter your awareness through how it makes you feel, in your gut. Flanders is a film that should be experienced in much the same way. It’s more of a visceral experience than an intellectual one, although it will induce an onslaught of thinking about its meanings once you allow it to touch you.

Apart from its stylistic challenges, Flanders is difficult to watch because of what it tells us about human nature. Most of us find solace in the belief that man is made in God’s image, or at the very least that humans are highly evolved intelligent beings. Dumont starts with the knowledge that human beings are first and foremost animals; that we are more crudely formed than society acknowledges. A mass of instincts and appetites, we have much more in common with the beasts in the fields than we care to admit.

In order to examine these basic animalistic urges, Dumont pulls back our outer skin, the veneer of civilization, setting the film in those inhospitable landscapes that civilization has mostly ignored. The movie begins and ends in Dumont’s native Flanders, and the title points to the importance of the setting—much like the title Twentynine Palms did for Dumont’s previous feature. Flanders is located in that rain-drenched no man’s land where France and Belgium meet—a rugged, muddy terrain inhabited by farmers who work the land with diligent perseverance. This is what they do because this is what they have always done. The idea that we have a strong tie to the land is important, not only because the bond existed before civilization began, but also because it reminds us of our kinship with our fellow animals.

Dumont shows the two main characters in the film, Demester, a farmhand, and Barbe, the daughter of a farmer, trudging through the fields and copulating in the woods, much like farm animals do, with little concern other than satisfying the male’s sexual appetite. This sex scene very early in the film is full of intent, and it sends us into a state of unease. Why doesn’t Barbe show any pleasure? She offers her sex to Demester blandly, without emotion. Why hasn’t Dumont directed the actress to at least fake enjoyment like most filmmakers do? Dumont is reminding us that Barbe’s own actions are just as rudimentary as Demester’s; her own instinctive urges have drawn her there, but provide her with little else beyond that. The idea is that yes, men are animals, but then, women are, too. Although there is the bud of something more between them, neither Demester nor Barbe react beyond their fundamental biology. Their relationship is pared down to its essence—blunt consensual sex, and a wordless companionship.

Later, with friends at a local bar, Demester states flatly, and in front of Barbe, that she is not his girlfriend. The comment is insensitive, and speaks to Demester’s crude emotional current. Barbe’s only other possible satisfaction from their coupling—that Demester is her man, her mate—is taken away from her, and her immediate reaction is a physical one—like a reflex, and also insensitive—offering her body to someone else. Society may call her a slut, but Dumont knows better. Her means may be coarse, but it’s the only way she knows to express her humiliation, and her defiance.

After witnessing these rudimentary lives, Dumont then takes the men out of Flanders and places them in scenes of war. In contrast to the wet, mushy terrain of Flanders, the war scenes take place in a hard, desert landscape—only blue sky and brown dust. And like the landscape, human behavior is pared down to its essence—only here it is that of survival rather than fecundity.

Demester and three other men from Flanders have enlisted in the army to fight in an unspecified war in an unnamed part of the world. We can only gather from the landscape and the dark-skinned inhabitants that the war is somewhere in Africa or the Middle East. It’s obvious that Dumont’s concern is not political but philosophical—his curiosity is not about the uses of war, but the existence of sanctioned violence. Stripped of its political strategies, the war that Dumont depicts is simply an environment that provokes the physical instinct to be brutal and barbaric. By the end of these war sequences, we’ve witnessed Demester as both the perpetrator and victim of horrible acts. Layers of dirt cover him; the dirt is even encrusted in the folds of his skin. His eyes stare out of the dirt like an animal; the blank stare that is the same for prey or predator. Although the dirt is scrubbed off when he returns to Flanders, Demester looks like a shorn sheep—fragile and unsteady.

It’s worth noting that Demester’s acts of violence include his participation in a gang rape of a woman who turns out to be an enemy soldier. When Demester and his fellow soldiers are later captured, her revenge demands nothing less than the castration of one of the captives. That it is a woman who orchestrates the torture is noteworthy. Much like Barbe in Flanders, this female soldier bears the brunt of the men’s behavior, but is also complicit in it. Dumont wants us to be aware that violence, like sex, is not only the domain of men.

Throughout the film Demester is taciturn, betraying very little under his implacable face. But in the end, we find something stirring underneath his physicality, though it’s all tied up, small and inchoate. Demester’s final scene with Barbe is his first act of intimate communication. Suddenly, humanity’s complex desire for empathy and compassion bursts through the beast that is man. It occurs in a barn, and it seems to be almost beaten out of him; nonetheless, it is an expression of a uniquely human need. It is Dumont showing us a moment of transcendence—humanity, in the grand sense of the term, at its birth. It sends a shiver of relief down our spines. This is what we have been waiting for, and it is what assuages us. It’s not much, really, but for Demester, and Barbe, it is significant. And after the trials Dumont has put us through, it is significant for us as well. It is our redemption.