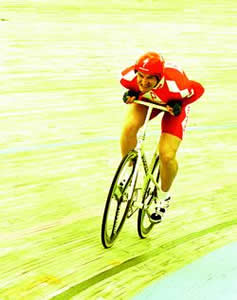 I’m really a sucker for inspirational movies…the ones in which an individual overcomes enormous obstacles and conquers the establishment. The ending of such movies is never in doubt. The joy in watching these films is in rooting for the underdog, watching him doggedly pursue and ultimately achieve success, and, in the process, conquer his own fears.

The Flying Scotsman is such a movie. It’s the true story of a Scottish cyclist, Graeme Obree (Jonny Lee Miller), who rose from obscurity to win the one-hour world track cycling record in the early 1990’s. And although it has all the ingredients of a well-made inspirational film, unfortunately, it never leaves the required lump in the throat.

At the start of the film, after a young Graeme Obree is hounded and taunted by bullies, his parents give him a bike for Christmas. The scene quickly shifts ten years and Graeme is now a single-minded, some might say, obsessed, cyclist who has won some local races. He owns a failing bike shop and must earn supplemental income as a bike messenger in order to support his young family.

With little plot development, Graeme decides to compete for the world track cycling speed record. The film follows his cycling career: his grueling and lonely training regimen, his successes and failures in racing, and his home-grown, creative construction of a new aerodynamic style of bicycles that challenge and threaten the stodgy, professional cycling establishment.

As a dramatic and sobering counterpoint to Graeme’s outward displays of grit and courage, the film also explores the inner Graeme…one haunted by deep bouts of depression and despair. It is difficult for a film to explore depression or any mental illness for that matter without being either melodramatic or unrealistic. However, The Flying Scotsman succeeds admirably in its exploration of mental illness and the manner in which Graeme, his loyal wife (earnestly played by Laura Fraser)and his friend/ manager (Billy Boyd) cope with his condition.

Playing the role of Graeme Obree, with his complicated and subtle persona, is a challenging job. It is a credit to the acting skill of Jonny Lee Miller that he makes Graeme come alive. His performance in The Flying Scotsman is inspired, nuanced and genuine.

Jonny Lee Miller’s first noteworthy film appearance was in Hackers (1995) with Angelina Jolie. His three year marriage to Angelina Jolie (no comment) and his role in Trainspotting (1996) probably brought him equal notoriety. He has appeared on the London stage as well as in a number of other films including Melinda and Melinda (2004) and Aeon Flux (2005).

But in the end, The Flying Scotsman is a film about bicycle racing. As it happens, I have learned quite a bit about this sport, since, before we met in law school, my husband had been a bike mechanic, frame builder, racer and bike shop manager. He still works on his several bikes and is always tweaking their componentry.

So perhaps I had a greater appreciation than most audiences would have in the lengthy part of the film that details Graeme’s struggle to win races on his home-made bike despite the cruel and arbitrary treatment he received from the bicycle racing establishment. And even for me, watching Graeme alone on an indoor track (velodrome) literally racing against the clock was just not as exciting as watching the more familiar road races, such as the Tour de France, in which riders directly compete against each other.

To cut to the chase, The Flying Scotsman is the skillfully-portrayed, honest story of an interesting, complex and troubled cyclist. For bike racing enthusiasts there is much meat here, but the film may ultimately fail to fully engage and inspire a more general audience.