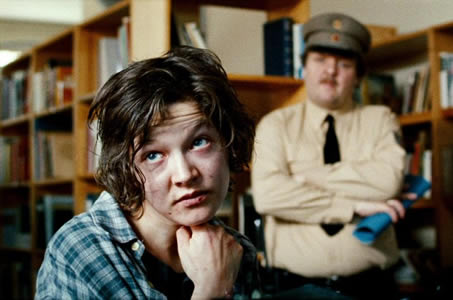 Filmed in grainy, deep shadows and set in a contemporary women’s prison outside Berlin, Four Minutes offers a long view into modern German history through the prism of a miniature double portrait of personal and cultural trauma. Directed by relative newcomer Chris Kraus (Shattered Glass, 2002), the film soars, if that’s the right word, thanks to the stunning performances by the wonderful Monica Belibtreu as Traude Krüger, the 80-year-old Prussian spinster music teacher, and Hannah Herzsprung as Jenny von Loeben, the Mozart-like child musical genius, who has blossomed into a sociopathic nihilist. Each has deep, dark wounding secrets that both explain their individual peculiarity as well as provide psychological motivation for their unlikely affinity, even as each further traumatizes the other.

Now, Teutonic gloom is not everyone’s cup of tea, and cinephiles may want to put on their Babelsberg-tinted German Expressionist glasses to view this emotionally taut, if seemingly one-dimensional melodrama. The dramatic structure of Four Minutes rests on the logic of the traumatized psychological condition known as the fugue state, a condition marked by not just dissociation but an emotional amnesia, which allows denial of the underlying distress and profoundly impaired judgment. It could well be considered the leitmotif of twentieth-century German artistic obsession.

Shot in jumpy crosscuts reminiscent of the recent classic, the zombie-dystopic 28 Days Later, Four Minutes opens on a note of suffocating horror. An elderly but very resilient woman, the prison’s long-time music teacher is attempting to have a piano delivered to the prison. Anglophonic viewers may trace a Dickensian undercurrent, but the opening scene evokes the underclass atmosphere of pre-Nazi era Berlin Alexanderplatz, Alfred Döblin’s 1929 novel and basis for Fassbinder’s 15½-hour made-for-TV dramatization (1980). The novel opens with petty crook-victim Frank Biberkopf’s release from prison into the festering underbelly of coruscating Weimar-era Berlin, a time briefly, it must be noted here, when “mannish women” could live and love openly.

Octogenarian Fräulein Krüger is not merely a familiar figure of Prussian rectitude. She is a member of that German species of long-term survivor, having outlived Hitler, World War II, and the long-divided city of the Cold War era. She is also a lesbian of a forgotten era, or rather would have been, except for terrible circumstances beyond her control, and ended up instead a lonely, bitter spinster, blending in with her society’s expectations for a woman of her generation. Her fractured past will resurface through her unwilling involvement with her final protégée.

On the surface neither character is particularly likable. Jenny von Loeben, the seeming punk nihilist, conjures memories of Ulrike Meinhof and the domestic terrorists of 1970s Germany. She is a kind of German Patty Hearst, born into a world of privilege she scorns, having been victimized, literally, by its wounding hypocrisies. The drama unfolds as segments of each woman’s past come to the awareness of the other. The two –– willful, arrogant teacher-survivor and willful, arrogant student-genius –– make for an uncannily well-matched pair, united by disparate paths of adversity.

The complicating twists and turns of the plot boil down to a fairly simple premise: a bitter spinster piano teacher takes on teaching a highly gifted, but violent and self-destructive young ward. The teacher wants to save her job and get in a few stabs at the hated prison administration. Psycho girl may be a budding sadist, but she has a few righteous scores to settle as well.

A riveting film-going experience, Four Minutes may prove “too German” for many non-German-speaking audiences. There are heavy layers of German history and German preoccupations to swallow whole –– the tormented Romantic soul, creative genius as a form of insanity, the blood sport of revenge, and all the meditations on recovering from the traumas of the twentieth century. Everything culminates in an incredibly over-the-top virtuoso four–minute film finale, a professional musician’s nightmare and an SM fetishist’s fantasy orgasm come true. Once seen, this film cannot be forgotten.