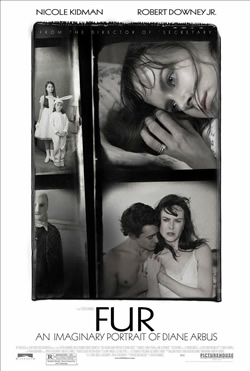 Fur calls itself “an imaginary portrait” of Diane Arbus before she became a photographer. In other words, the story is completely fabricated, so anybody expecting a serious study of Arbus’ development as an artist will not find it here. Fur is a witty, insightful, often moving, and ultimately romantic fantasy that seems to want to worship Arbus more than explain her. And even though it opens up some interesting doors to a feminist critique of her life and work, it ends up relying on an overworked love story to keep it afloat. Fur may be a loving tribute to Diane Arbus, but it’s a fictionalized version of her. The woman who became famous taking pictures of the grotesque remains a mystery.

The first obvious sign that this film has no intention of sticking to historical detail is the casting of Nicole Kidman in the role of Diane Arbus. The two women are poles apart in appearance—Kidman is a ravishing specimen of Anglo-Saxon beauty, and Arbus, although a looker herself, was an Upper West Side Jewish girl born to Russian immigrants. Except for the hair color, there is no attempt to make Kidman look or sound like Arbus. And the differences go beyond ethnic features. Photographs of Arbus reveal a melancholy and an uneasiness that lurks behind a pair of dark and doleful eyes. She looks as though she’s hiding something from us. Kidman’s looks suggest something quite different—there is strength and emotional availability in her slanted, piercing eyes, with a hint of mischievous gleefulness underneath. Arbus had the look of a woman who could conceivably take her own life, which she eventually did at the age of 48. Kidman, at least in this role, has the look of a woman who might spend long periods in bed under the covers, but who would never resort to suicide.

Kidman’s presence seems to be part of the film’s determination to steer clear of the bleaker aspects that mark Arbus’ photography to concentrate on the more fun stuff—namely, her often sardonic response to the 50s culture she grew up in, her interest in sexual and erotic deviance, her sense of irony and the absurd, and her adoration of freaks. As such, Kidman is a perfect conduit. She has the wit and comic timing to enhance the absurd, and a vibrant sexuality lurks underneath that porcelain exterior. Playing Diane the repressed 50s housewife trying to maintain an appearance of tranquil composure and orderly perfection, Kidman is the ideal 50s Barbie Doll with frayed nerves. And when she just can’t take it anymore and walks out on the fire escape and exposes her brassiered breasts to potential voyeurs in the apartment building across the street, Kidman lets that sexuality ooze to the top with just the right touch of irony.

The depiction of Arbus as a repressed 50s housewife whose sexuality is seething underneath those tight waistlines may not be accurate, but it’s what director Steven Shainberg and screenwriter Erin Cressida Wilson have chosen to emphasize. (The two were also responsible for Secretary, another film that explores female sexual behavior.) Shainberg’s direction is particularly good in the scenes that serve to define the 50s era, especially its need to eradicate postwar society of all unpleasantness by making it impeccably clean and wrinkle free, right down to the plucked eyebrows and sparkling appliances. Shainberg also places the camera in such a way as to emphasize the sense of voyeuristic complicity that helped let a little steam out of the pent up culture. When we watch the film, it often feels like we’re looking through a peephole. It’s a nice directorial touch that parallels Diane’s own voyeuristic curiosity. And like Alice who climbs through the looking glass, Diane’s curiosity leads her to the attic apartment of Lionel, and out of the stark pastel hues and straight lines of the 50s into the dark, heavy fabrics and cluttered interiors that defined the Victorian age—and the dark interiors of the mind that the 50s tried to forget.

Lionel is a freak who suffers from a condition that makes hair grow all over his body. As Lionel, Robert Downey, Jr. spends most of the movie in an ape suit, with two brown melancholy pools peering out of it. But underneath all that hair is a man of charm and sophistication, a gentleman with a beautifully seductive voice. Who knew that Downey’s voice could have such a physical effect? As riveting as Kidman can be, it’s Downey who transfixes us. He endows the hirsute Lionel with a sexuality that is as hypnotic as it is unusual. Not since Cocteau’s own version of the Beauty and the Beast fairy tale has an actor covered in fur been able to seduce an audience just by manner and gesture, and a vocal sonority that could melt icebergs.

The introduction of Lionel into Diane’s life teems with potential for exploring sexuality at its margins, namely the complementary conceits of voyeurism and exhibitionism. Diane even comes to Lionel in hopes of taking his picture, as a good voyeur would. But the courtship seems to go on forever, and the movie wears thin in the last half. It doesn’t help that there are no real hints of sexual attraction on Diane’s part, only a constant curiosity that remains blandly voyeuristic, or worse, a spiritual love that is bound by chasteness. It’s only when Diane realizes that Lionel is a dying man that things start heating up. By the end, the sex scene feels obligatory. Can you get any more normal than that?

If the filmmakers are telling us that Diane’s artistic creativity was unleashed by the love of a good freak, then it’s a shame. To turn a story so full of good intentions at the beginning into another movie about a woman who is liberated from the chains of culture by a man makes me wonder where all the good stories went. Do we really need another movie like The Devil Wears Prada this year?

One can only assume that the real story of Diane Arbus was much more complicated than the one we find here. Her photos are proof enough of this. They are chilling images that evoke feelings of sadness and anguish. Why that is we can only begin to imagine by looking at the culture she lived in. An understanding of Arbus’ kinship with the grotesque goes beyond a sociological reckoning, or even a love affair with a freak.