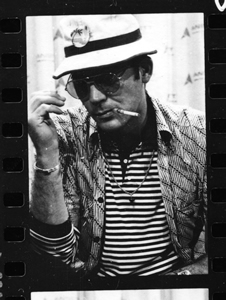 I have always thought the biggest difference between documentaries and fiction films involves how they can portray alcohol and drug use. In feature films, we have all seen characters who are imbibing or “using” portrayed as funny, insightful, achingly honest, inspired, poignant, scary, or deeply disturbing. But in documentaries, people who are drunk, high, or stoned almost always just look, well, embarrassing. Then what can director Alex Gibney (Enron- The Smartest Guys in the Room; Taxi to the Dark Side) do with all his footage of the great journalist Hunter Thompson abusing drugs and alcohol? Nothing. And an unsettling part of Gonzo is seeing the drugged out and drunk Thompson at his most abusive and most banal. But our discomfort pales beside the fascination and pleasure in learning about or being reminded of that remarkable work and career.

Born in Louisville, Kentucky in 1937, his father died when Hunter was fourteen, and his secretary and research librarian mother raised her three sons on her own and drank a lot. Thompson, who was always good at writing, began to write more after he joined the army, and became a journalist after his stint. Comfortable using guns, intrigued by violence, involved with drugs and alcohol, and hating traditional forms of authority- he was the perfect journalist to embed himself with the Hell’s Angels motorcycle gang and chronicle their exploits. His articles in The Nation and subsequent book gave him a national reputation. He then covered his own campaign for sheriff of Aspen, Colorado as a kind of libertarian-anarchist-legalize-drugs-counter-culture-representative and almost won. A series of articles in Rolling Stone magazine in 1971, Fear and Loathing in Las Vegas, explored hallucinogenic drugs, the search for the American dream, and created gonzo journalism- a style of reportage in which the reporter becomes part of the story, blends fact and fiction, and has an irreverent point of view. It made him the most famous and acclaimed outsider journalist in America. A year later he covered the presidential elections. His search for an honest politician, whom he found in George McGovern, would become the brilliant Fear and Loathing on the Campaign Trail, and it further enhanced his reputation.

He never again produced anything nearly that good, remained mired in alcohol and drugs, became even more obsessed with guns, and while his son, daughter-in-law, and grandson were visiting and in the next room, he blew his brains out in 2005. He had sent a suicide note to his second wife a week before. It read: “No more games. No more bombs. No more walking. No more fun. No more swimming. 67. That is 17 years past 50. 17 more than I needed or wanted. Boring. I am always bitchy. No fun- for anybody. 67. You are getting greedy. Act your old age. Relax- this won’t hurt.” Of course he had choreographed his own funeral, which included launching his ashes from a cannon atop a 150 foot tower that he had designed and sported his famous drug insignia of the clenched fist with two thumbs.

Watching Gonzo, it’s hard to like Thompson much, but even harder not to be dazzled by his talent. Gibney says he was inspired to make the film when the Bush administration planted a phony journalist in the press room to lob easy questions to the President.

But beyond the sham reporter, where was a press corps that would challenge Bush as to the facts and capture the venality and madness of his presidency? Resurrecting Thompson seemed a good idea; the fourth estate needed his edge.

Gibney is right about all of it, and he has such a good ear and eye for the telling detail. We hear about the young Thompson typing out the entire Great Gatsby, over and over, just to get a feel for Fitzgerald’s rhythms. Gibney knows to give plentiful voice to Thompson’s first wife, as she, more than anyone, saw the creation of the media star and his decline, and she appreciates him but without blinders. And there is the maddening and poignant tracking of his decline, as he becomes less and less of a journalist and more and more of a gonzo performance. Being a cliché doesn’t make it less true- Thompson was a prisoner of a style that he created; living a gonzo life became more important than being a gonzo journalist. And as Gibney says, “drugs and alcohol are a young man’s high and an old man’s disease,” and that which undeniably fueled Thompson’s greatness also laid him low.

But there’s one delicious exception to his pattern of descent. The first day after 9/11 Thompson wrote with astonishing prescience about what was likely to follow: American military might going to the wrong places, perhaps fighting a war in Iraq that would be impossible to manage after victory, the emergence of a broader war with terrorism that was not about nation-states and would be fought on endless fronts, the threats to civil liberties, and the government’s attempt to cow and bully the press and anyone else who dared to dissent.

Gonzo is too long; almost every depiction of a chapter in his life needs to be tightened. It includes far too much footage of Johnny Depp’s terrible performance in the terrible film Fear and Loathing in Las Vegas. It eschews any explanation of what made Thompson the rebel that he was. It never assesses the merits and problems of gonzo journalism. But you want to forgive Gonzo its few faults because of the abiding pleasure in being yet again with that Thompson prose. When I was a senior in college, Norman Mailer was invited to our school’s chapel to read a selection from an article he was about to publish that would later become a book- Armies of the Night. That evening, Mailer looked at us with arrogance and pugnacity and told us that he was our general and we were his troops. And we were to sit still and shut up. And he had something important to tell us. And we did. And he did. And I have always thought that no American writer ever used language better than Mailer at his best. And Thompson was no Mailer. But when Gibney gives us that torrent of words and ideas and emotions that Thompson could uncork- the power of the language rolls over you like Mailer’s, and it is enormously fun and breathtaking and quite beautiful.

(9558)
$7.44 (as of January 23, 2021 - More infoProduct prices and availability are accurate as of the date/time indicated and are subject to change. Any price and availability information displayed on [relevant Amazon Site(s), as applicable] at the time of purchase will apply to the purchase of this product.)

(2368)
$9.99 (as of January 23, 2021 - More infoProduct prices and availability are accurate as of the date/time indicated and are subject to change. Any price and availability information displayed on [relevant Amazon Site(s), as applicable] at the time of purchase will apply to the purchase of this product.)