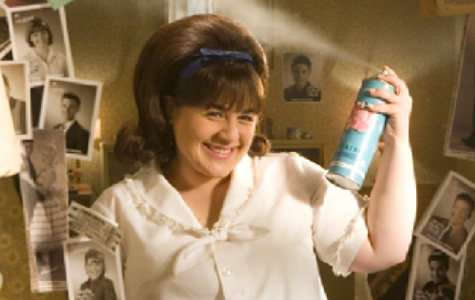 Directed and Choreographed by Adam Shankman

Who would have guessed that a movie musical based on a Broadway musical based on an even earlier non-musical movie could be so good? It’s not that director Adam Shankman has created art-with-a-capital-A or a new form or anything, this is a highly commercial summer blockbuster-wannabe. As a choreographer-turned-director, however, what he has done is create a dancing and singing (listed in order of importance) extravaganza, the best movie choreography since West Side Story and a piece of film-making that has a remarkable rhythm and impatience to it—not to mention a smirking, lurking sense of anarchy.

Waters’ original film, starring the shit-eating trans-star, Divine, was tame by Waters’ standards, more nostalgia than shocker. But the plot conveyed by his film, where the infamous drag-queen played a frumped haus-frau, smoking at the ironing board in her gigantic housecoat and slippers, (along with an unknown Ricky Lake–pre-stomach-stapling and talk-show stardom– as young chubette Tracy Turnblad,) did manage to build itself a clear ‘fuck the system’ message. And the systems in question were more than just high school –try American bigotry, TV-blandness, inferior white-people-dances and Pat Boonish music. Fortunately the new movie, for all its obeisance to the book and narrative re-do of the Disneyfied Broadway production (where another man, Harvey Fierstein, was popular as a Jewish-motherly tub as Ms. Turnblad) uses all its dancing, hyper-active energy to head back in the original direction. This is born-again anti-establishmentarianism.

Don’t go to see the movie for John Travolta, who is strangely passive and pathetic in his fat-suit and falsies—shocked in all that make-up out of acting. However, he can still dance, and a romantic duet for Travolta and Christopher Walken is charming in an Astaire and Rogers kind-of way,. Everybody else in the movie (with the exception of the beautiful scene-stealer, Michelle Pfeiffer, who plays the villainess with real gusto) sets aside their chance at stardom to simply get down and dance. Really, the best way to enjoy this movie would be dancing. It may be time for a mashed-potato revival.