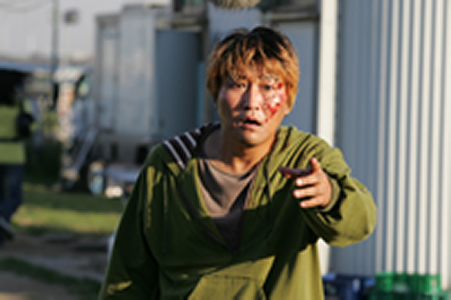 After the well crafted, carefully observed tour de force on human foibles that was Memories of Murder, one wouldn’t exactly expect writer-director Bong Joon-ho to follow it up with a monster horror movie. Even with only three features under his belt however, Bong could be following in the steps of a Stanley Kubrick, taking different genres, respectable or not, imposing his own sensibilities, and following or flouting those genre conventions much like Kubrick did with 2001: A Space Odyssey (science fiction), The Shining (horror), or Full Metal Jacket (war). Still, having broken box office records in South Korea, The Host has people calling Boon the Korean Steven Spielberg, which is not totally inappropriate.

The protagonists are the Park family, who operate a small food stand near the Han River. Hee-bong (Byun Hee-bong, Volcano High) is a Milquetoast grandfather who defers to authority, tries to avoid conflict, and tries to get his way indirectly usually through networking or bribery. He has two sons – lazy, dim-witted Kang-du (Song Kang-ho, Joint Security Area) and the educated but jobless and resentful Nam-il (Park Hae-il). The most successful member of the Park family is Hee-bong’s daughter, Nam-joo (Bae Doo-na, Take Care of My Cat), a national Bronze medallist in archery. Obviously, having notable archery skills in a monster movie is a nice asset, but the quiet, pensive Nam-joo is no Green Arrow. The final member of the Park family is Kang-du’s precocious daughter, Hyun-seo (Ko A-sung), who’s in the seventh grade.

The film begins with an actual incident in February of 2000 in which hundreds of bottles of chemicals were dumped into the Han River from a U.S. Army base. Of course that didn’t lead into a mutated monster bigger than an SUV, but here it does. Boon bucks convention first, by showing the monster right off the bat. No lurking in dark shadows or unseen underwater for half the movie for this beast. The thing, which looks like the most evil giant tadpole imaginable, is introduced in broad daylight hanging from a bridge. A bemused crowd gathers speculating whether it’s some kind of weird dolphin before it suddenly goes on a bloody rampage smacking human bodies around like rag dolls or swallowing them whole.

Secondly, Boon makes the movie’s heroes an unlikely dysfunctional family. There are no Schwarzeneggers or Stallones in sight when the creature makes off with young Hyun-seo. She is able to call Kang-du on a cell phone from the sewers where the creature lives, but no one else believes she is still alive, leaving her disjointed family to try to save her. Complicating this task is that the creature is believed to host a horrible virus (thus the English title of the film) with the Park family being infected. They escape quarantine in their attempt to recover their youngest member, but the family is on the run from the authorities.

Boon shows that he has the film grammar of a Spielberg in how well he conveys his story cinematically – Nam-il trying to escape by rolling into shadow or Nam-joo navigating the underside of bridges to remain hidden. Boon will go places that Spielberg won’t though. For example, he denies the film the kind of easy happy ending that almost ruined The War of the Worlds. What is uniquely Boon’s own is the ability to fuse humor, drama, and horror into a scene or even often into a single image. His comic absurdity is not played for self-conscious laughs, but rather complicates the emotional response of the viewer. When the Park family is mourning Hyun-seo’s apparent death, someone announces a vehicle plate number for inappropriate parking, mixing the tragic with the mundane. A paranoid crowd of people take disproportionate notice of a man’s coughing fit. Boon manipulates the winding path of a conversation between Kang-du and a U.S. official that is both hilarious and tragic.

Like a lot of horror movies, The Host is sometimes incoherent, especially regarding a U.S. government conspiracy, and often contrived. How does the Park family keep running into the creature while all of South Korea’s military is unable to find it? Trying to append excessive realism to the movie however takes out all the joys of watching this crazy family unite to combat a beast that has earned the fears of an entire nation.