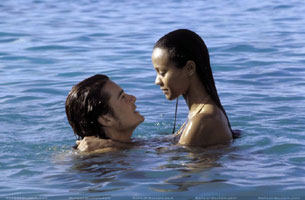 No one in Haven is quite what they seem to be. Or rather, they are mostly completely transparent. Everyone living in newcomer director Frank E. Flowers’ vision of life on the Cayman Islands is so deeply corrupted, it is hard to care about a single one of them, whether a local, an expat, or a tourist. Indeed, wherever they may have hailed from originally, everyone in Haven is slick, shallow, drug-addled or booze-soaked, cool beyond cool, rich or obsessed with getting rich quick and dirty. Haven is populated with unfathomably greedy people. Or, not quite everyone? Early in the film two young innocents, Shy (Orlando Bloom) and Andrea (Zoë Saldana) become ill-fated lovers, based on one night in bed, when Shy comes to harvest Andrea’s virginity on her eighteenth birthday. Shy’s greedy desire for Andrea will open the door to both their demises.

Flowers seems smitten by Quentin Tarantino. Whereas Pulp Fiction played out super-ironic deadpan, both homage and send-up of the genre, Haven comes across woefully short of either ironic or transcendent observation; perhaps a little something about a haven full of damned souls might have gone a long way. Quite the opposite – the self-absorption of all the characters makes for very boring viewing fare. And the endless violence, petty crimes, petty vendettas, and cattiness among the drug-addled populace do not ingratiate either the local culture or the characters to anyone, in the movie or the audience.

Despite boasting a large and impressive cast, including Orlando Bloom, Bill Paxton, and Agnes Bruckner, it becomes readily apparent why this film sat on the shelf for two years before being released. It comes with plenty of plot, way too much plot, too many characters, too little character motivation. The acting goes nowhere. The film seems addicted to its own obsession with depicting glamour.

Carl Ridley (Bill Paxton), an American businessman, wants to give up his shady business practices in Miami, and absconds off-shore to the Caymans with a million dollars taped to his torso. His daughter Pippa (Agnes Bruckner) suddenly find herself dumped into the local Cayman scene by dad. Carl’s lawyer, the super-shady, always double-crossing Mr. Allen (Stephen Dillane) fills every minute of his screen presence with misogynistic spewage – the older the culture, the deeper the moral rot, perhaps. And then, suddenly, a new film, or rather, other plots begin. Pippa had found Fritz (Victor Rasuk) sleeping in her bed in her father’s Cayman condo. Low-life slacker Fritz ‘borrows’ from everyone, and in no time drops Pippa into the party scene of local gangsta glitterati. Meanwhile, Fritz’s pal Shy has become mesmerized by Andrea’s virginity. A night of stolen love-making suddenly finds him on the wrong side of everyone and on the run for his life. Soon theft, revenge, counter-theft, counter-revenge, double-crossings abound.

The miasma of these fast-paced dual plots that don’t actually go anywhere build to a last-minute climax, in which revelatory connections are made. By the time this quasi Robert Altman-like meeting of unrelated characters happens — and even if the viewer has kept track of all the characters — it’s hard to care about much of anything, other than knowing the film is nearly over. The effect is like an overly eager and inexperienced young lover whose months of wooing finally culminate in a long-overdue premature ejaculation.