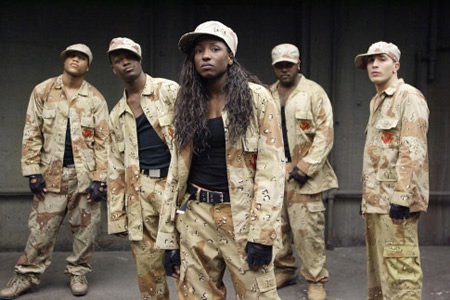 Raya (Rutina Wesley) is a black student at a white prep school, gladly leaving behind her ghetto background for this privileged preparation for med school. But when her older sister dies of a drug overdose after depleting the family’s savings, Raya is forced to drop out of private school and return to her roots. Her Jamaican parents are determined to protect her from the street culture that claimed their older daughter. This attempt to isolate her is reinforced because so many other kids resent Raya as snobby for having gone to prep school. So, will she ever re-establish her friendship with an old girl friend- Michelle (Tre Armstrong) and an old guy friend who’s attracted to her- Bishop (Dwain Murphy)? Will she be able to overcome her individualistic tendencies and actually "belong" to a Step crew? Will she ever get the money to continue her education by winning the big Step Dance contest? And will she ever learn that, yes, it’s fine to hope and believe and have ambitions to leave the mean streets of black America, but, gosh, you shouldn’t ever forget or deny your ghetto past? Do you care about the answer to any of these questions?

There was reason to hope that this might have been a better film. The director, Ian Iqbal Rashid, has an interesting background and sensibility to bring to the project. Born in Tanzania, raised as a Muslim in Toronto, now living in London with his male lover, writing prize-winning poetry and TV films, and with one pleasant gay feature film comedy under his belt, Touch of Pink– Rashid has a range of aesthetic interests and experiences that could be drawn on to make this film distinctive.

Alas, he never does. But there is one very brave thing that separates How She Move from the myriad of other films from which it was cloned. There’s not a trace of MTVitis. Rashid is not interested in showing off, not interested in seeing how many fast cuts he can cram into a dance sequence, not interested in hammering us to death with the musical score, not interested in generating the emotion of breathless, dazzling fatigue from his techniques. For anyone who has seen any of the 42,000 black dance films of the past few years and screamed at the screen when the close ups and cutting made it impossible to actually appreciate the dancing- How She Move is the antidote. We actually get to see the full beauty, grace, and power of Step Dancing.

There may not be a surprising moment in this paint-by-the-numbers plot, and all of the actors are perfectly fine, but none are truly memorable, save Raya’s mother played by The Wire’s Melanie Nicholls-King. But the dance sequences, choreographed by Hi-Hat, are riveting. Hi-Hat is one of the few women who has had an impact on rap videos. And beyond dance, she also created the wonderful cheerleading routines in the under-appreciated Bring It On. Her work here is breathtaking. The dance sequences exude masculine bravado and beauty, dazzling acrobatics, surprising movements that make an audience giggle with delight, and emotions that feel raw with angry assertiveness but also, at times, a tender comradery and joy in the group of dancers’ sheer, shared delight in creative movement.

There’s no reason to begrudge How She Move its formulaic plot and structure. After all, many of us grew up enjoying lousy westerns because the gun fights kept our attention, or mediocre cop and kung-fu movies because the action sequences were such a joy. Of course, it was such a rush when one of these genre films actually transcended the limits that we had come to accept. How She Movs never comes close to being any better than any of the other films in its genre. But, for great action or violence or dance- it’s well worth wading through the rest. And the dance here is, indeed, a very special treat.