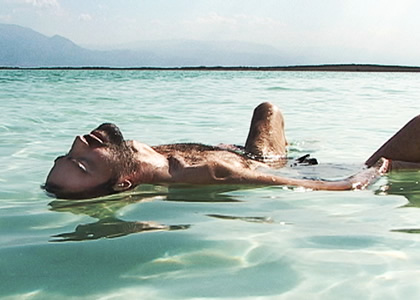 The advent of digital video technology has forged a new creative movement in film, most notably, I think, in the realm of the personal documentary (cinema’s relative of the personal memoir in literature). To cite just one example among many—a few years ago, a guy with a digital camera gave us 51 Birch Street, a brazenly honest autopsy of his parents’ 50-year-marriage. The filmmaker, Doug Block, found a domestic drama of tragic proportions when he started digging into the relics of what had seemed an ordinary marriage. And now there’s Indestructible, Ben Byer’s account of his battle with ALS, one guy’s physical and emotional journey down the fast lane to mortality. Indestructible is a stirring narrative, a movie of epic dramatic force that holds its own with the best of any major work of cinema.

When Ben Byer, a 31-year-old sometime actor and promising new playwright, was diagnosed with ALS, he decided to document his life on camera. What started as a series of video diaries became a three-year journey around the world, in search for answers, for meaning, and perhaps a cure. Luckily for Byer, and for us, the cinematographer Roko Belic (Ghenghis Blues), a childhood friend, came to Byer’s aid behind the camera, giving the film a visually romantic, even ethereal, quality that offsets beautifully Byer’s rather mischievous and boyish behavior and his often-deadpan delivery. Together with Belic and his editor, Tim Baron, Byer has made a great film memoir, one that is graced with beauty, courage, humor, emotional honesty and psychological insight into what makes us human, and what gives our lives meaning.

ALS, also known as Lou Gehrig’s disease, is a neurodegenerative disease that slowly destroys the brain’s ability to communicate with the body’s muscles, and the fate of everyone with the disease is a gradual decline of the muscles’ ability to move, leading to paralysis, and eventually death. There is no cure, and once a patient is diagnosed, life expectancy is rarely more than about six years. It’s one of the worst ways to die, a death sentence with no hope for recovery, and as yet no approved therapies to arrest the progression.

And yet Ben Byer manages to show us a way to live with this death sentence with courage, humor, and only an occasional scoop of self-pity. The film spends very little time on the ravages of the disease itself, although they come through easily enough as we watch Byer grow steadily thinner and weaker as the film progresses. Byer rarely goes into detail about the various ways his body stops working; he lets the footage speak for itself. And the few times he does focus on his deterioration, it is shrouded in curious observation, or even humor, like the almost comical way he has found to take his T-shirt off by himself, which involves an ungodly amount of bending. In fact, during much of the movie, Ben is in constant movement, visiting people, interviewing ALS patients and medical experts on the disease. We see him traveling to far-off places—Greece, China, and finally Israel—in search of understanding, both about the disease and how patients cope, and in search of therapies that might offer hope, if not for a cure, at least a few more years of independent movement. While in China, he even decides to take part in a controversial surgical procedure that involves injecting fetal cells into the brain stem—a therapy that some patients swear has reversed the disease, but sadly, for Byer, had no effect, except for the financial and emotional toll it took.

The film ends up being in part an urgent call for more medical research in the fight against ALS, but for most of us, its value lies in what it teaches us about life, about the human condition, as Byer takes us on his own protracted spiritual journey. In a twist of fate, Byer was given the gift of necessity, of urgency, in his quest for understanding—He faces experts in the fields of medicine, human behavior, Buddhism and Judaism—including eminent neurologist Oliver Sacks—and asks them point blank, his vocal powers already diminished by the disease, how he should live his life. While he doesn’t get answers that immediately assuage, they are still affirmations of the human capacity to adjust, to endure, and the very human urge to seek solace in religion, the quest for spirituality, and the comfort of work, and love.

One might wonder why anyone would want to go see a documentary about someone dying a slow and dreadful death from a fatal disease. But Indestructible is not that kind of film; it teems with experiences of great compassion, courage, and emotional connection. It’s a movie that confronts the fundamental questions we all ask ourselves—what gives life meaning, how do we live with the inevitability of death, where can we find comfort as we struggle through the pain that life sometimes hands us. Most of us ignore these questions as we go through life, but Ben Byer had death knocking at his door, and so didn’t have the luxury of denial that most of us use to get us through. His fateful deadline compelled him to open his eyes, and his heart, wide open, and this film is the gift of seeing through his eyes, and feeling through his heart, without having to go through the disease ourselves.

Ben Byer even comments on that very idea, that ALS gave him the ability to confront the great themes of life, and to make this film. It is the contradictory, and quite affective, nature of memoir—an ordinary person in extraordinary circumstances constructs a story from their life that can compete with the great stories of literature. Byer understands that, and at the film’s end, he pays homage to it, with the same self-aware humor that infuses the whole film. In a voice already barely understandable due to the disease, with tears welling up in his eyes from pondering the irony of his fate, he looks at the camera and confesses: “I wish I was a good enough artist to make this movie without having this disease.” Then he gives a wry smile, actor and playwright that he is, and continues, “THAT would be talent.”

However the hell he got it to us, Mr. Byer has made one extraordinary film. It’s a legacy he and his loved ones should be proud of.