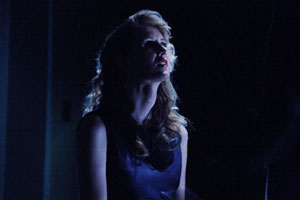 David Lynch is one of those directors whose films are instantly recognizable as his, and whose style has had such an effect on pop culture that it’s garnered its own adjective, Lynchian. Inland Empire is Lynch’s long-awaited follow-up to the highly acclaimed Mulholland Dr., made five years earlier. Empire combines so many riffs from the previous film as well as images familiar from his entire oeuvre that it feels Lynchian to the point of self-parody.

Like Mulholland Dr., the setting is Hollywood. Insofar as there is an intelligible narrative, it’s about an actress, Nikki (Laura Dern, Blue Velvet), who gets a part in the movie ‘On High in Blue Tomorrow,’ only to learn that the production, ‘based on a Polish gypsy folk tale,’ may be cursed. In a previous attempt to make the film, both leads were murdered. Nikki’s co-star, leather jacket-wearing Devon (Justin Theroux, Charlie’s Angels: Full Throttle) sports a bad boy persona and has a reputation for being a ladies’ man. Freddie (Harry Dean Stanton, Paris, Texas), whose conversations are entirely made up of non-sequiturs, assists Kingsley (Jeremy Irons, Dead Ringers), a perfectly pleasant and mundane Hollywood film director.

As Empire enters the second hour, this story is mostly abandoned as Nikki becomes just another of several personas inhabited by Dern. In addition to Nikki, there is Susan, the character she is playing, who may or may not be the same person who lives in a lower-middle class house with a Polish husband who worked as a carnie in Europe. Then there is the personality, reminiscent of Billy Bob Thornton’s Bad Santa, who recounts all of her violent interactions with men with vivid vulgarity. She associates with a chorus of curvaceous women bantering about men. They could be Devon’s previous conquests or just exceptionally good-looking street walkers on Hollywood Blvd.

Whether the audience is supposed to take the many Dern personalities as the fractured psyche of a single character or alternate worlds colliding doesn’t seem to matter to Lynch. He seems to be after different cinematic effects, not a rational explanation. Lynch has said that he shot different parts of the film without thinking about how they would connect, an admission that few watching the movie will find surprising. The dialogue is filled with indecipherable phrases such as ‘If today was tomorrow, you wouldn’t even remember you called on an unpaid bill,’ or comic absurdities like ‘There are consequences to wrong actions, dark they will be.’ Even the title, Inland Empire, which refers to the area west of Los Angeles and Orange County, is thoroughly obtuse. One brief mention is made to it in the film and perhaps some of the film is set there, but any substantial thematic linkage probably requires an intellect beyond mere mortal ken.

Further complicating matters are other subplots including a woman (Julia Ormond, The Baby of Macon) who claims she has been hypnotized into murdering someone with a screw driver, a beautiful Russian woman caught up in intrigue in the early 20th century, and a cryptic rabbit family on a minimalist sitcom set accompanied by an indiscriminate laugh track. The rabbit people and a time traveling gimmick may be Donnie Darko subconsciously infiltrating Lynch’s psyche.

Lynch shot the film using a Sony PD-150, which is only a notch above most consumer digital video cameras and a big stretch from the high definition professional cameras employed by the likes of George Lucas or Michael Mann. Blown up on the big screen, the image is low-resolution muddy and pixilated. Lynch surely had to be aware of the ugliness of the image by conventional standards, but intended it or simply didn’t care. This effect is somewhat allayed by Lynch consistently employing extreme close-ups of the actors, limiting the amount of definition the camera has to capture, but this technique borders on being garish.

Cinematography and narrative cohesion aside, Lynch sustains a mastery over atmosphere and mood and fashions numerous memorable moments – a smug neighbor (Grace Zabriskie, The Grudge) who introduces herself to Nikki and whose presence gradually becomes more sinister, Nikki’s butler performing a victory dance when she gets the part, Kingsley trying to guide a light into its proper place on the set, a seduction scene channeled primarily through a character’s breathing. All of Lynch’s usual repertoire is here – dank dark halls, deep shadows, red curtains, ominous soundscapes. Eventually though, Empire reaches a state of Lynchian overload and verges on becoming a caricature of his arthouse fetishisms. Maybe he wanted it that way. Along with Dern, Theroux, and Stanton, he brings in several other actors from his previous films for cameos – Diane Ladd, Laura Harring, and Naomi Watts (in voice only). Inland Empire is Lynch to the nth degree for all the good and bad that implies.