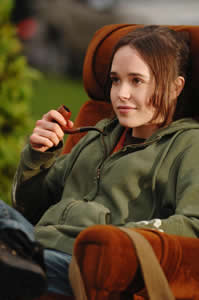 Juno, a smart-mouthed, sweet, well-acted comedy directed by Jason Reitman (Thank You for Smoking) and written by former stripper, Diablo Cody, arrives riding a tide of effusive critical praise and word of a breakout, star-making performance by its twenty year-old lead actress, Ellen Page.. The advance rapture cuts both ways raising expectations for those venturing into theaters this week.

The film is certain to scare the parents of teenage girls. Juno (Page), the intelligent, highly verbal, sixteen-year-old misfit of the title—hey, who of any value didn’t feel “different” in high school?– has sex out of boredom with her nerdy best friend Paulie (alovable, geeky Michael Cera) and becomes pregnant soon after the opening credits roll For the most part, she’s remarkably detached, even sardonic, about the whole event.

The first third of “Juno,” which is punctuated by glib, pop-culture speak that passes for dialogue, uttered only by kids in movies, threatens to be the kind of self-consciously quirky, indie film in love with its own preciousness that emerges from the Sundance Institute. However, the story and our interest grow when spunky Juno breaks the news to her blue-collar Dad (a fine J.K. Simmons) and step-mom (Allison Janney). Certain that she’s been expelled or has a serious drug problem; they’re relieved to hear she’s merely pregnant.

Juno decides to give her baby to an upscale, childless couple, Vanessa an uptight career type, wonderfully embodied by a radiant Jennifer Garner and Mark (Jason Bateman), a hip composer of commercial jingles who nurses an unrequited ambition to be a rock star and, as it turns out, is ambivalent about fatherhood. Mark’s interest in Juno is not altogether innocent but what she yearns for is the perfect family she never had.

A precocious teenager, whose big vocabulary vainly masks her inexperience, Juno doesn’t know as much as she thinks she does about the workings of the adult world. Her disillusionment with Mark and Vanessa and renewed appreciation for Paulie form the soft, mushy heart of the film.

Unfortunately, Cody’s dialogue, which might have seemed brilliantly hip on the page, often reduces Juno to a mouthpiece for zingy lines, though, at other times, she does have an ear for the shorthand of teenage girl talk. Cody has been quoted as saying, “everything is prostitution,” so one can surmise that, for her, sex is a transaction, an attitude that leaks into the early part of the story. Somehow, the transition from stripping to Hollywood doesn’t seem like a stretch.

Page(“Hard Candy”) does her game day best to bring authenticity to an artificial construct- the spunky odd duck who triumphs over adversity and finds her true self in the end. She’s the main reason to see the film and a talent to watch.