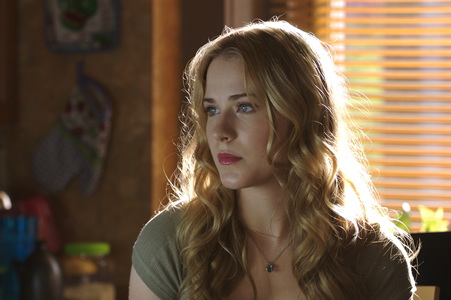 The Life Before Her Eyes

With over eight months left in the year and hundreds of films yet to be released, it requires a certain kind of audacity to declare that The Life Before Her Eyes is, and will always be, the absolute worst film of 2008. But consider this: a teenage girl who was psychologically devastated by a shooting massacre in her high school continues to live for fifteen years in that same small town where she was traumatized, drives past that same school every day on her way to work, and teaches at another school that resembles that same school from her past. And believe it or not, she keeps having flashbacks to the day of the shooting. Hmmmm. But perhaps we should go back to the beginning.

Diana (Evan Rachel Wood) and Maureen (Eva Amurri) are two generic high school girls. Diana is wild and rebellious. She sleeps around and is called a slut. She hates school and her small town and can’t wait “to get on with my life.” But we can tell that deep down she has a heart of gold and is a smart and interesting person. Her best friend Maureen is a good girl. She likes nice boys, goes to church, dresses modestly, and radiates sweetness and light. She’s a good friend to Diana, and so we like her too. One day the girls are trapped in the bathroom by another student with a machine gun. He has just killed untold numbers of students and faculty, and tells the girls that he’s going to kill one of them. The rest of the movie cuts back and forth between the story of Diana before this horrible moment, and then fifteen years into the future when Diana (Uma Thurman) is married with a daughter, and then back to the bathroom where the psychotic gunman terrorizes the girls.

You might think that having been part of a high school blood bath would be enough misery for poor Diana. But we soon discover that she also has flashbacks, an inability to sleep, and her daughter has a tendency to disappear and hide. And her husband may be having an affair, but she’s so unstable that it’s impossible to know if she is really seeing an infidelity or just imagining it. And her daughter then runs off into the woods and we never find out what becomes of her. And did I mention that in high school she had an abortion, it went bad, she had to be hospitalized, and her jerky boyfriend dumped her? At another point she’s almost run over by a car and has to be taken to a hospital. And then there’s the Sophie’s choice that she’s given in the bathroom by the killer. He tells her to decide whether he should shoot her or her best friend. And she’s hiding the secret that yesterday the killer told her that he was thinking of shooting people. But she didn’t take him seriously and didn’t warn anyone, so all of this death is her responsibility. And then her dog is killed by terrorists. Ok, I lied about the dog, but everything else really does happen to her.

Beyond preposterous plotting, the film has a look and feel that screams Serious Work of Art. Ponderous music. Striking camera angles that call attention to themselves. A science teacher tells his students that their bodies are seventy percent water, and they should care for their bodies. And so every third scene in the movie has some kind of water imagery: rain, fish tanks, swimming pools, sprinklers, dew on leaves, and in case we missed any of it, most of the water imagery scenes are played more than once. There’s more water in this movie than in Waterworld, and every drop of it is symbolic, metaphoric, iconic, and other cool words like those.

But more than the absurd plotting and the pretentious direction, it’s the psychological obtuseness that most sinks (oops, a water image) this film. Perelman actually begins the movie with great power. The two girls in the school bathroom hear gunfire and then a teacher pleading for his life before being shot, and then they face the homicidal boy. It’s a chilling and devastating opening, tapping into primordial fears of kids and parents. Which of them will live and which will die? Why and how? And then Perelman flashes forwards and backwards into Diana’s story. And he expects us to focus on this? Everything outside that terrifying bathroom is just a distraction. We both dread returning to the bathroom but need to know exactly what happened there. And he thinks we’re going to get emotionally engaged in the past and future stories? It’s astonishing that he can be so dense about the psychological orientation of a movie audience.

It would be unfair not to credit the fine work of Eva Amurri as Maureen. Rachel Evan Wood ( Thirteen, Running with Scissors) seems incapable of giving a bad performance, but her Diana is who she has portrayed countless times, and her performance seems well crafted but unremarkably familiar. Poor Uma Thurman, a fine actress who has been given a role with no dimensions. Her Diana is simply a basket case. Since there’s no psychological depth or complexity, she is left to walk around looking pained, bewildered, a deer in the headlights. She doesn’t have a single moment where her anguish feels as though THAT’S how Diana would experience it and react. She’s not a recognizable Diana; she’s just an abstract version of the walking wounded.

My favorite film of 2003 was Perelman’s House of Sand and Fog. It was a brilliant and powerful tragedy of Shakespearean dimensions. He had complete control of the subtle performances. He structured it like Antigone, where we had hopes that things might not turn out as terribly as they do. He gave us characters with nobility and flaws. It was an astonishing first film. Let’s hope he can return to that kind of filmmaking.