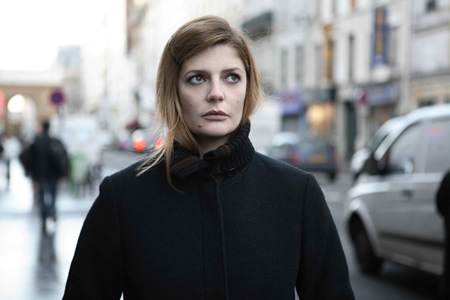 Twenty-four year old actor Louis Garrel is on a roll, not of making good movies, but of playing the love interest opposite the world’s most desirable women. That’s not to say some of these relationships haven’t been particularly creepy; after all, he made his big splash as the incestuous brother of Eva Green in The Dreamers. His very next film, Ma mère, paired him up in another case of incest with Isabelle Huppert, playing his mother, though Garrel spends most of his screen time dallying with the sublime Emma de Caunes. Regular Lovers saw him with Clotilde Hesme. In the short, Un lever de rideau, it was sultry Vahina Giocante. In Love Songs, Hesme returns to join Garrel in a ménage-a-trois with Ludivine Sagnier!

It’s a real question though as Ismaël and Julie flash petty jealousy over just how much attention and affection to bestow upon Alice. To circumvent the seriousness, the three constantly speak to one another on multiple levels of irony and put up playful facades. That all comes to an end however when a tragedy completes the film’s Act 1, titled “The Departure.” “The Absence” and “The Return” round out the three-part structure as a young student named Erwann (Grégoire Leprince-Rinquet) and Julie’s sister Jeanne (Chiara Mastroianni) complicate Ismaël’s life.

Honoré has tremendous potential as a director. He has a good compositional eye and he’s daring and ambitious, but he’s also très pretentious, often indulging in deliberate ambiguity for its own sake. Worse here, it feels like he’s slumming in Love Songs, like he’s not trying that hard. The songs by Alex Beaupain often do work narratively, following the French musical tradition in which much of the lyrics are just sung dialogue, but several songs are just filler. One about rain and another about the park in winter would not have been missed on the cutting room floor. The songs range from poppy to seductive to melancholy, but none of them come off as particularly inspired.

The movie’s other big problem is that Ismaël is the least interesting character in his own story. Garrel has yet to show much range and he’s in his comfort zone of playing sullen and passive with only the occasional spurt of liveliness. That describes most of his roles to date. The energy he brings to a scene in which Ismaël jokes with Jeanne using a dish rag like a sock puppet is sorely lacking in the rest of the picture. Hesme, on the other hand, brings to vigor to every scene. Too bad the movie wasn’t about Alice.