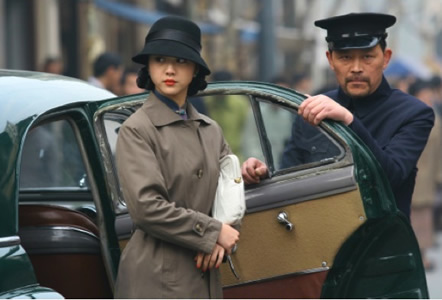 When we meet shy Wong Chia Chi (newcomer Tang Wei, out of her depth here), she’s a member of a patriotic Hong Kong theater group turned resistance cell. They hatch a plan to assassinate Mr. Yee (the wondrous Tony Leung), head of the Chinese secret police and informer for the Japanese, by using Wong as bait. Taking the name Mrs. Mak, Wong infiltrates a mahjong circle overseen by Yee’s shallow, gossipy wife (an underused Joan Chen.)

Playing a seductress in the role of a lifetime, Wong, a fledgling actress, is far from a practiced femme fatale in the Mata Hari mold. Nonetheless, she succeeds in luring Yee, a brutal, taciturn, coiled snake of a man, into a clandestine affair. Their first assignation, which is a shocker, takes place in a seedy apartment where he wordlessly throws her against the wall and down the bed, ties her hands behind her back and subjects her to a brutal anal rape. After he finishes, he simply slips away. Evidently, he’s not a big talker. The pair quickly falls into a sadomasochistic relationship. The abundant, exposed sex, so raw it appears real, is ugly, without heat and painful to watch.

The problematicalbeginning of the film, before their liaison begins, is tedious and unbearably slow. The earnest student resisters botch their first murder and there’s little character development among the members of the group. The film is saved by Leung who, with presence to burn and a mournful, implacable face that betrays little, is believable as a dangerous, explosive sadist who’s into domination and pain. Tang Wei, though, isn’t up to carrying the film and doesn’t have the juice, looks or acting chops to be credible or compelling.

The story bears some resemblance to “Black Book,” Paul Verhoeven’ s lurid tale of a Jewish woman, who used her sexuality to betray and gain advantage over the enemy, only to succumb to the charms of an SS officer and forget what team she was playing for. Neither film works but at least Verhoeven’s predictably trashy effort was entertaining and suspenseful.

The same cannot be said for “Lust, Caution,” which doesn’t so much end as come to a halt. After it limps to its conclusion, Lee wants us to believe that we’ve witnessed something important, that Wong loses her identity through the involvement, that both parties are ensnared in ways neither anticipated and that their true feelings for each other are ambiguous. However, all that registers, in between long periods of portentous stillness, is sound and fury signifying nothing.