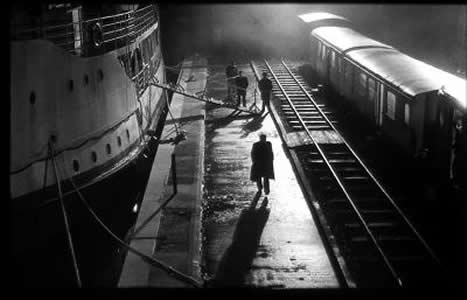 Based on the novel by: Georges Simenon

The films of Bela Tarr will most likely never be for the hoi polloi. Which is a pity, really, as he is one of the most original talents working today and certainly one of the greatest craftsmen. But you will not see a gaggle of giggling groupies crowding around a red carpet premiere of a Tarr film. You will not see a line of nerds dressed as their favorite impoverished Hungarian villager character wrapped around the block of a theater on opening night. You will not see gossip columns devoted to the latest turn in the relationship between one of Tarr’s stock actors and a pop singer. Although if these are the indications of a film having reached a certain level of acceptability with the masses, perhaps it’s a good thing his films are a bit more rarefied. It just means that the vast majority of filmgoers will miss out on this filmmaker par excellence. Anyhow, I suppose it would be a bit much to ask the YouTube-informed attention spans of today’s movie watchers to elasticize themselves to tolerate a 7 and a half hour Hungarian film in black and white with very little dialogue.

Given Tarr’s esoteric inclinations, it’s curious then that he would make what, after all is said and done, amounts to a genre picture. The Man From London is based on the novel by Georges Simenon, which has the end effect of feeling a bit like Bela Tarr doing Graham Greene, an unlikely pair. Sort of like John Ford doing Franz Kafka. Or Quentin Tarantino doing Jane Austen. Well, maybe not like that. But it’s fair to say that while Tarr remains at top form directing the camera and the atmosphere in The Man From London, the narrative feels as though it’s not best served by his style, nor does his style feel complemented by the story.

The sequences, the long passages of Tarr’s films, London included, serve to draw the viewer into a contemplative state. If that was the intended effect with London, then it succeeded. However, there’s the nagging sensation that the plot is calling for a noir-like dramatic tension, which never quite comes across. The story follows a mysterious package that arrives, a murder, and the innocent man who ends up with the package. That the mystery contained in the package is merely gobs of British currency, as opposed to the magnificent whale that arrives in the town in Werckmeister Harmonies (2000) or the complicated return of the character of Irimas in Satantango (1994), speaks to the lack of excitement that I have for this film when it is held up next to these other Tarr works.

When Tilda Swinton arrives on screen, her presence is more of a distraction than anything else. Her overdubbing in Hungarian stands out like a sore thumb in a way that Hanna Schygulla’s role never deterred from Werckmeister. Pardon the frequent comparisons to his other films; there’s really nothing quite like the more recent films of Bela Tarr though, so it’s hard to contextualize it within the framework of any other films. Swinton is fine, as usual, but it’s as though she’s in a different film than the rest of the internationally unknown Hungarian cast. Furthering the chasm between Swinton and the rest of London, the scenes between her and her husband harkens back to Tarr’s early work, which was more Cassavettes-like in style than the moody, ponderous tone of his later films.

Tarr is well known for taking months – months! – to prepare every shot in his films. His careful, studied effort and his meticulous execution are second to none, and are apparent in every frame of his recent films, even London. If you are familiar with Tarr’s work, used to admiring how well the formal elegance, his mastery of craft fit in with his examinations of the human condition in loose narrative structures, then you might be disappointed with the more conventional arc of London. The bottom line is, while it’s not a failed film, it’s not a step forward in his career, either. This is unfortunate particularly because I had sensed that, like Gus Van Sant, who credits Bela Tarr for his own artistic renaissance, Tarr was one of those directors who was getting better as he got older and made more films. London is most like Damnation (1988), which was a more like practice lap for what would come to be the master-classes in well-crafted, thoughtful filmmaking of Satantango (1994) and Werckmeister Harmonies (2000).

Bela Tarr has not lost his, if I may, mojo, nor has he sold-out, but the merely satisfactory London will have to tide Tarr aficionados over until his next great work. And maybe I’m wrong. Maybe there is a die-hard fan club for Tarr that would follow his filmmaking anywhere, and line up around the block to attend a premiere. After the lights came up in the screening I attended, I overheard two other audience members delight in recognizing the main character’s daughter as the girl who killed the cat in Satantango. Tarries may not be as many as Trekkies, but they are just as dedicated.