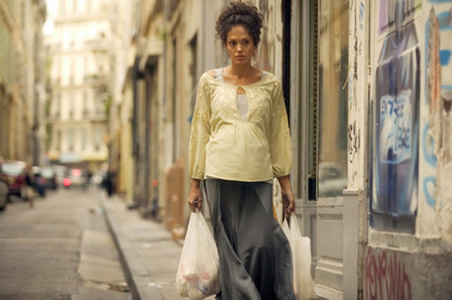 The most interesting thing about A Mighty Heart is why it became a mediocre film. The movie teems with abundant ingredients for something of political and artistic merit. In 2002, Daniel Pearl, a reporter for The Wall Street Journal, was kidnapped and later killed by Islamic extremists in Pakistan. He seems to have been a fine journalist, a loving husband, a thoroughly decent man. His French, journalist wife, Mariane, anchored an array of forces that tried to rescue him. International embarrassment and American pressure had the Pakistani government vigorously pursuing the case. The Wall Street Journal and the American Embassy sent men to help. Mariane’s closest female friend and associate was intimately involved in the investigation. Mariane herself was heroically forceful and focused in every situation. And beside these good guys, there were bad guys galore- all with some involvement in the kidnapping. The whole saga played out around a ticking clock. Much of the world was transfixed by the story. And it’s all true. And if that weren’t enough, arguably the most famous female movie star in the world and a gifted actress, Angelina Jolie, would play the lead. And the project would be helmed by Michael Winterbottom, a highly respected director of political films (Welcome to Sarajevo, Road to Guantanamo).So what went wrong?

It’s often said that success has many parents while failure is an orphan. A Mighty Heart may not be a failure, but it’s a major disappointment, and the father is clearly Winterbottom, with an assist from screenwriter John Orloff (Band of Brothers miniseries). Quite disastrously, the director seems to have little interest in actually telling this fascinating story. Once Pearl is kidnapped, we can’t keep up with which bad guy is which. Names and faces fly by. Suspects are arrested, tortured, and implicate others. But we can’t keep them straight, nor are we certain which of them are actually guilty or innocent. Moreover, the good guys lack qualities to individualize and humanize them. Fairly generic characters (the nice cop, the shady diplomat, the hapless editor) scurry around without ever engaging us in their thoughts and processes. And as we are unable to keep up with people or events, a vivid and heart-rending story becomes a mélange of images and themes, chaotic and jumbled. By the end of the movie, virtually no viewer could explain to a friend what exactly happened.

But Winterbottom has other concerns. He’s drawn to the phenomenon of the story and what it represents- those images and themes. He wants to suggest how international terrorism cannot be defeated by conventional means. He wants to remind us that the "good guys" (the U.S. and Pakistan) commit torture and have shaped a world that is fertile ground for the "bad guys." He wants to eschew demagoguery and racism by offering up a range of Arabs and Muslims. He wants to show us a survivor- Mariane Pearl- who does not allow her personal tragedy to transform her into a vengeful, hate-filled person. And all of that is admirable, to be sure, but that is what drives the movie- and drives it into the ground.

Concerned with the phenomenon of what the kidnapping represents- rather than the story and our investment in the characters and their relationships- Winterbottom adopts an unfortunate assortment of techniques. To achieve a kind of pseudo- realism, he gives us hand held cameras, bad lighting, and choppy editing. This herky-jerky documentary style works wonderfully well when capturing the back-stage energy of a rock concert or the heart-breakingly chaotic humanity on United 93. But it’s a disaster here. I keep imagining what a young Sidney Lumet (Serpico, Prince of the City, Dog Day Afternoon) or Marty Ritt (Spy Who Came in From the Cold, Norma Rae) could have done with this material. They would have placed lucid story telling and complex characters front and center. The political points would be unmistakable, but they would emanate from our engagement with, and commitment to, people and events. It’s hard to believe, but A Mighty Heart lacks a single relationship with its own dynamics, development, and emotional claim on us.

Ironically, the faux realism of the techniques never feels viscerally real and gripping. For all the camera movement and flashy editing, the film’s most powerful moment is simply when Mariane learns that her husband is dead, goes to her bedroom, sags to her knees, and wails piercing sobs of primordial, inconsolable grief. That moment in the story, and the power of Jolie’s acting, devastate us. If only the rest of the film had been as committed to story and character.