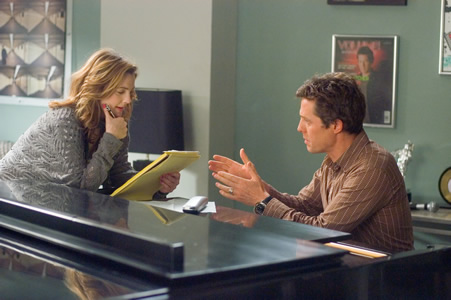 Written and Directed by Marc Lawrence

In this middling romantic comedy, Hugh Grant plays Alex, a washed up singer who once topped the charts as part of a famous 80s pop duo (think the other guy from Wham!), but whose career is now reduced to nostalgia gigs on the class reunion and state fair circuit. Alex is scraping the bottom of the barrel when a hot new pop sensation named Cora suddenly appears (an inspired performance by newcomer Haley Bennett that makes you wonder why she doesn’t give up acting and take on Shakira). Cora tells Alex how much his 80s hits meant to her and asks him to write a song for them to perform together on her next album. This is Alex’s big break, a second chance at fame, only he doesn’t have a lyricist. Enter Drew Barrymore as Sophie, who has arrived at Alex’s door to water his plants for him, and who just happens to have a gift for rhyme.

The idea behind “Music and Lyrics,” that two people can complement each other so well that their union makes them better people—the “you complete me” theme—is the basic ingredient of romantic comedies. Unlike melodramas, that deal with the vinegar and baking soda of dysfunctional relationships (the “you destroy me” theme), romantic comedies endlessly offer us variations of the perfect couple, no matter how much they seem like polar opposites at first glance. They are the gin and vermouth, the sweet and sour, the peanut butter and jelly of love. Whose cynical heart hasn’t been zapped back to life by couples like Tracy and Hepburn, Rob and Laura Petrie, Marsha Mason and Richard Dreyfuss (remember “The Goodbye Girl”?), Tom and Meg, Billy and Meg, Woody and Diane?

And now, there’s Hugh and Drew. Unfortunately, that is what is wrong with “Music and Lyrics.” It may not be fair to blame one of the partners when a relationship doesn’t seem to be working (counselors constantly remind us that both partners contribute to the dynamic), but I can’t help but point my finger at Drew Barrymore. It’s hard to explain why she seems so wrong for the part of Sophie. It may have something to do with the lack of chemistry between her and Grant, but I think it has more to do with a basic lack in the Drew Barrymore persona.

Neurotic, self-conscious, high maintenance, goofy, klutzy, temperamental—these are the qualities of the women in romantic comedies, and Drew Barrymore just isn’t any of these. She’s a sweet, sensible, big-hearted, even maternal child/woman whose appeal is nurturing, even (here comes the insult) calming—she’s a Hallmark card, a rose without the thorns. Drew Barrymore does display a strong feminist streak underneath the sweetness, which is good, but there doesn’t seem to be any crisp intelligence behind it. Maybe that’s why her films opposite Adam Sandler worked so well. With the bar Sandler set, Drew couldn’t help but rise above it.

But alongside Hugh Grant, Barrymores’s strengths don’t seem as enchanting. When Drew delivers Sophie’s lines verbalizing her neuroses in a wave of freeform monologue, the potential humor is lost. And the physical comedy falls flat as well. A big joke in the film is that she’s a plant sitter who seems to know nothing about plants, and when she pours water on a plastic plant, it’s supposed to bring a laugh. Drew watered the hell out of that plant, and I still couldn’t muster a chuckle. If Diane Keaton had been holding that watering can, I probably would have been doubling over from the pain in my side. Better yet, make that Woody Allen with the watering can.

The only time I was doubling over in laughter was during the opening sequence when Hugh Grant sings and gyrates in a hilarious send-up of ‘80s music videos. Watching Hugh Grant playing a lovable cad is always quite funny, but the fact that he does a believable job as a pop singer with just the right hip moves makes it all the more charming.

Hugh Grant is a genius at romantic comedy. He has just the right blend of good looks, sex appeal, wit, sensitivity, self-awareness, and even more endearing, self-mockery. And his line delivery is sheer perfection. He can make even the most insipid jokes seem somehow funnier. It’s partly his Englishness that brings wit to everything he says. It’s a phenomenon similar to reading Beatrix Potter books with an English accent—suddenly the humor becomes apparent. With that accent, a slightly stopped posture, and all those other attractive qualities, and you’ve got a finely wrought machine for romantic comedy.

Hugh Grant is so comfortable playing this type of role that he can’t help but be magnanimous, allowing everyone else to look good, too. That’s why Drew Barrymore’s performance is noteworthy. She instinctively knows enough to let Hugh be the lead in this romantic duet. And Hugh has the good grace to take the lead without upstaging his leading lady. Isn’t that the mark of a great dancer—to make your partner look good? Even Grant’s screen kisses are whole-hearted. Not that Drew isn’t appealing to look at, but I bet Hugh could kiss a toad and make it look sexy.

With Hugh doing what he does so well, and Drew not getting in the way, and a smattering of great writing, this movie isn’t half bad. And there are moments that surpass that. The opening credit sequence is one of them. There are others, including Sophie’s tongue-tied confrontation with her ex-boyfriend (played with deadly charm by Campbell Scott).

But the true stroke of genius that all romantic comedies should aspire to occurs in the middle of “Music and Lyrics.” Sophie and Alex have been holed up in Alex’s apartment for days, trying to write the song that will make him famous again, and in an instinctive need to tackle writer’s block, Sophie moves her chair to get closer to the piano, and Alex freaks out. She has moved the chair in such a way that he is trapped behind his piano. It’s a wonderful moment, and it reminded me of the tension that couples inevitably face when intimacy forces them into moving closer together. How they resolve the problem—with Alex turning his piano around so that Sophie can still sit close to him while he can easily reach the front door—his escape hatch—is a beautiful bit of visual comedy. It’s not that we want to leave; it’s that We Want To Be Able To Leave that’s important. And that, as all of us undying romantics are aware, is what true love is all about.