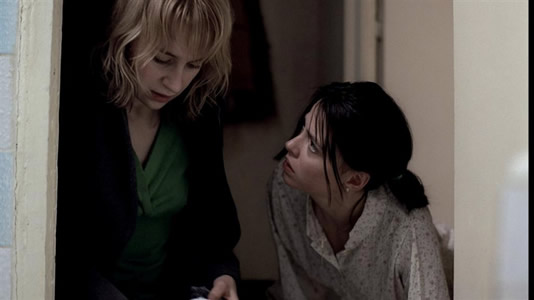 This year’s Palme d’Or winner, 4 Months, 3 Weeks and 2 Days, makes it’s U.S. debut at the New York Film Festival, and it’s easy to see why it’s winning awards. It’s already being called “the abortion movie,” which does it no justice whatsoever. Making good movies out of hot button issues are virtually impossible because filmmakers usually try to force story and character into a predetermined and reductive schematic that fits their view of the issue. Writer-director Cristian Mungiu focuses so intently on character, this movie always feels like it’s about the women and their particular circumstances and not about any issue at all. Furthermore, against expectations, the film will likely appeal to both proponents and opponents of legal abortion. It shows both the horrors of illegal abortion and the potential traumatic experience of abortion in general, but again, it is done without a hint of didacticism or the maudlin.

Set in 1987 in Nicolae Ceausescu’s Romania where abortion was still illegal, the story only comes into focus gradually. We see blond Otilia (Annamaria Marinca) run around trying to secure a hotel room but not exactly why. There are a lot of seemingly irrelevant scenes dealing with small talk about cigarette brands or what kind of flowers to get someone’s birthday. But it all comes together and the details prove not to be mere adornment but often vital to story and character. The tone of normalcy before makes everything that comes after all the more excruciating.

Otilia meets the careful Domnu Bebe (Vlad Ivanov), who will perform the abortion, and they talk to gain each others’ trust. The process reveals their personalities as much to the audience as to each other. Otilia takes him to her roommate, the flighty Gabita (Laura Vasiliu), who has been pregnant for the length indicated by the film’s title. Bebe leads a stern discussion to cover all contingencies if the procedure should go bad, and then becomes indignant when he learns that Gabita has lied about a few details. One of the most poignant dimensions of 4 Months is Otilia’s reaction to her friend putting her in a compromising position as the weak Gabita hands the hard work to her.

Mungiu mostly uses a handheld camera aiming for greater immediacy, and for an unsung filmmaker, Mungiu displays a dazzling command of the medium. In the day, everything has a gray pall cast over it, and the night is darkest black with the rare sliver of light stabbing out at the characters like knives. 4 Months has the spare feel of a film by the Dardenne brothers but more flamboyantly directed even in its minimalism. One of the opening shots is a mesmerizing extended take tracking Otilia into a hall way, through a communal bathroom, and into an apartment where she purchases some black market goods from a neighbor.

Typical of Mungiu’s technique is the film’s centerpiece. Otilia is loathe to leave her friend, but she has promised her boyfriend Adi (Alex Potocean) to attend his mother’s birthday. She gives Gabita Adi’s mother’s number. In a 10-minute uninterrupted take, we watch Otilia detachedly sit among Adi’s parents and their friends at dinner as they engage in jocular conversation. In contrast, her face glancingly reflects the dread and turmoil beneath the surface, especially when the phone begins to ring.

Along with Cristi Piui and his The Death of Mr. Lazarescu, Mungiu is putting Romania on the cinematic map in dramatic fashion. Both films are characterized by neo-realist minimalism building steadily toward tremendous accumulative power. There is a moment in 4 Months, following events of some grave intensity, in which Mungiu is kind enough to lend the viewer a long take of a character simply waiting in quiet. The shot lets us recover. It’s a compassion Mungiu reserves for us as well as his characters. It’s the kind of grace that really makes this film special.

It is 1987 in Romania. You have to wait for things. A lot. It is before the time of cell phones, and you have to seek out a phone wherever you can find one. In the case of a rotary phone, you have to sit there as the dial revolves back to zero with every number. Before the advent of the easily accessible and questionably sound Internet, you have to solicit information from the hard to find and questionably sound word on the street. But all of this is nothing to the arduous process of having an abortion, which is illegal under the communist dictatorship of Ceaucescu.

Having spent his youth living through this harsh time, director Christian Mungiu, sets his film, 4 Months, 3 Weeks and 2 Days, in the bleak twilight of the regime, which ended in 1989. Abortion, while legal and even encouraged in other communist countries of the time, was a grim choice for a woman in Romania then. Mungiu based the film on the stories he collected about women who suffered, many of who died, because of this law. His film, which has already found success – it won the Palme D’Or at this year’s Cannes Film Festival – is not exactly a political film, however. It is more a story about the trials and tribulations of being alive, which allows for the universality of its scope and has lead to its acclaim. Furthermore, rather than focus his story on the woman having the abortion, he instead gives his attention over to the woman’s friend who helps her through the process. By making this inspired call, Mungiu casts a wider net. It’s more about how far Otilia will go to do the right, humane thing to help her friend, than it is about the direct plight of the woman going through the illicit abortion.

The film opens with a shot of two goldfish moving about in a bowl. Mungiu then expands the frame to include Gabita, played by Laura Vasiliu, the student about to undergo the operation, and Anamaria Marinca as Otilia, as they move about their dorm room. The next 110 minutes are an exercise in likening these women to the fish trapped in the bowl. They are trapped by the direness of the situation, by the difficulty of making any kind of informed decision in such an environment. People in dire situations make panicked choices, and a government that does not allow for the freedom to choose is just such a dire situation. Indeed, Gabita struggling to keep her self together often jeopardizes the one relationship, Otilia’s, that can help her.

Mungiu trains his camera on his subjects with a Dardenne-like care. Otilia, like Rosetta, goes from task to task in order to do whatever she has to do to get through the ordeal. Mungiu’s lens imbues Marinca’s somber visage with a heroic stoicism similar to the way Dreyer presents Maria Falconetti’s face in The Passion of Joan of Arc (1928). Newcomer Marinca shows great promise in her ability to restrain Otilia’s frustration, yet never letting her lose her sense of her own humanity. Marinca says that she sees Otilia’s struggle as Shakespearean – quite simply, to be or not to be. To help Gabita through is what Otilia decides she has to do to merely be. A lofty claim, maybe, but that instinct drove Marinca to hit nearly every right chord. A protracted dinner table scene, in which she is begrudgingly planted in between her boyfriend’s boisterous and ranting parents, beautifully highlights her agony suffering in silence. And if that weren’t enough, Mungiu and Marinca follow that long one-shot scene with another long one-shot scene in which Otilia opens up/breaks down/runs the gamut of feelings with him.

Out of respect for the director’s wishes, I will refrain from divulging more than I already have about the plot. Mungiu hopes, as most directors do, the film be seen by eyes untainted by expectation. Much had been made of a certain gasp-worthy shot in the film, which I wish had not been discussed as much as it had before my own eyes saw it, primarily because I don’t think it’s as striking, or even as necessary as the gossip mill made it out to be. I will conclude, instead, by contextualizing the film in two ways.

First, as a point of comparison, I recommend Judd Apatow’s Knocked Up as a companion piece to 4 Months, both made this year. Knocked Up is set in America, a free country, twenty years after 4 Months‘ story takes place. It is a powerful statement about the prevalence of religious fundamentalism in America that in a movie about an unplanned pregnancy, abortion is discussed only twice, and one time the word is fudged into "shma-shmor-tion" to avoid actually saying it. I’m certainly not accusing Apatow of cowing to Christian conservativism. Far from, in fact. I think he’s made an appropriate diagnosis of the current climate in America, and is responding with the appropriate satirical humor. 4 Months strips all humor from the discussion, however, and shows what happens when humans are stripped of their freedom to choose. It’s as not pretty, as it is not funny.

Secondly, I went into 4 Months believing the bar for contemporary Romanian cinema having been set quite high by Cristi Puiu’s The Death of Mr. Lazarescu (2005). I heard a fellow cinephile say recently that while it took the Iranians a decade or so to catch up with Kiarostami, it’s taken the Romanians only a year to take cues from Puiu. 4 Months may not have quite reached Lazarescu‘s phenomenal heights, but it comes pretty damn close. Puiu has claimed that his was the first in a series of tales about love, inspired by Rohmer’s Moral Tales undertaking. Likewise, Mungiu calls 4 Months the first in his own series, Tales from the Golden Age, a name ironically lifted from the propaganda of Ceaucescu’s era. With Puiu and Mungiu, I foresee an actual Golden Age in Romanian cinema bubbling up to the surface. That’s something worth waiting for.