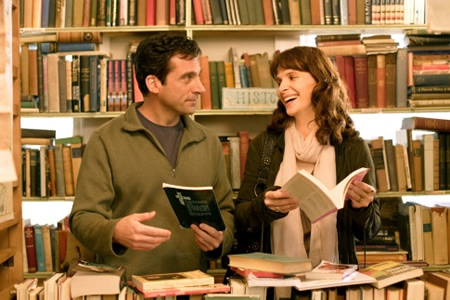 It’s hard not to enjoy a heartwarming movie, such as Dan in Real Life, in which Dan, a cheerless widower with three children (Alison Pill, Brittany

Robertson and Marlene Lawston) finds love and happiness. It’s also hard not to like Steve Carell in this film, whose adroit performance as Dan follows his versatile roles in Little Miss Sunshine (2006) and The Forty Year Old Virgin (2005).

In Dan in Real Life, Dan Burns writes an advice column, and thus, of course, can solve everyone’s problems except his own. His teenage daughters want boyfriends and driving privileges before Dan is ready to let them; and he hasn’t started dating again since the death of his wife four years earlier.

The film takes place off season on the Rhode Island shore at Dan’s parents’ homey roughhewn house, where the whole Burns family has gathered for one of their (unrealistically) happy family reunions.

Dan’s parents, ably played by veterans Dianne Wiest and John Mahoney, are the kind of parents the audience wishes were theirs. They have loving, supportive and comfortable relationships with Dan and his siblings, including his lightweight brother, Mitch (Dane Cook-Good Luck Chuck, Employee of the Month). The whole family is looking forward to meeting Mitch’s new girlfriend.

While out on an errand, Dan meets Marie, Juliette Binoche, (Quelques Jours en Septembre, Chocolat, The English Patient) and over coffee, Dan soon finds himself love-struck. We can understand why. As Marie, Juliette Binoche is dazzling; she is beautiful without being obvious; she is warm, engaging, interesting…and interested in Dan. As she departs, Marie reluctantly confesses that she is in another relationship. I trust that I don’t have to give my readers a spoiler alert here, since it is screamingly obvious that she is Mitch’s new girlfriend.

infatuation with Marie, which he feels must sublimate out of loyalty to his brother. Here is where Steve Carell shines. Our hearts melt at his longing, dejected gazes at Marie. His description of how it feels to be in love is genuine and tender. As directed by Peter Hedges (Pieces of April; Screenwriter: What’s Eating Gilbert Grape, About a Boy) who also gets screenwriter credit here, Carell’s multifaceted performance transports the movie above its otherwise rightful place as a run of the mill romantic comedy.

Juliette Binoche, Dane Cook and the supporting cast are great foils for Carell. They all play likeable, amiable, well-adjusted characters. Even Dan’s problematic teenagers are really good kids. After all, the daughter who wants to drive doesn’t steal a car; she merely tries to coax her father into giving permission. Actually, Dan in Real Life portrays anything but real life.

syndicated, which, I guess, is used to dramatize Dan’s moment of truth about his relationships with Marie and his children. At his interview with his prospective publishers, Dan confesses that he has royally messed up his own life. This turning point scene is an improvement over the “running to love” scene, where the hero realizes he can’t live without his girlfriend and must run to stop her from leaving the country or getting married. But we never see how the publishers react to Dan’s unexpected admission. In truth, the

All in all, I was engrossed and entertained by Dan in Real Life. The issue for me is how I felt afterward…it was as though I had relished eating a very sweet chocolate cake, but then bemoaned that I had allowed myself to overdose on sugar. But then again, I’m a sucker for chocolate cake.