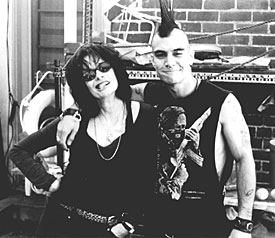 Penelope Spheeris changed my life. A suburban doofus who only knew punk rock from records, I took a date to the Sacramento debut of The Decline of Western Civilization in 1981. The film documented the Los Angeles punk scene at the moment when hardcore bands like Black Flag were taking over from the artier first generation bands like The Germs. It was a revelation. This was music more aggressive and cathartic than anything I’d ever heard, and what’s more, it was terrifying: in performance after performance, Spheeris caught the feel of a club driven to near-riot. The idea that music could be this alive – this dangerous – utterly redefined my expectations of what art should accomplish.

Looking back on the film today, it’s clear that Spheeris did far more than simply document a few bands. Her real gift is her generosity of spirit, a profound compassion for the alienated kids who flocked to the Masque club. The interviews never condescended to the fans and musicians, no matter how silly their posturing. She can get past the bluster to find the warmth and charm in virtually anyone.

For its first forty minutes, it’s a retread of the first two installments. They all open with the same sequence: hilarious, fragmented interviews of fans are followed by a montage of the featured bands reading snippets from a legal release ("By entering these premises, you are consenting to being photographed…") from the stage. Leapfrogging from interviews to performances, the film generates the familiar adrenaline charge while seeming just a little too familiar this time around.

In the second installment, the repetition of the first film’s approach had the effect of an implied critique: watching a bozo hair band like Odin, you couldn’t help but remember the first film’s scenes with the vastly superior X. It’s even worse here. The bands (Litmus Green and Naked Aggression are the standouts) all play recycled hardcore, every song an unintelligible blur. No one’s managed to take this style – a distillation of punk into two chords, a blazing polka beat and a singer screaming bloody murder – any further than Minor Threat, who made it all up back in ’80. It’s recycled culture, the noisy orgy of punk straitjacketed into a genre too rigid to evolve.

The film’s first half amounts to a funny look at an exhausted musical genre, an inside view of the wheel being endlessly recreated. The second half is something else entirely. Spheeris drops the music in favor of a cinema verite look at the lives of the homeless "gutterpunks" who panhandle and squat in Hollywood. The first two films were essentially comedies haunted by a pervasive undertow of sadness: as funny as it was to hear Nicole Panter describe her attempts to make Darby Crash sing into a microphone, all of his scenes showed someone so befogged with drugs that his death (right after shooting was completed) surprised no one. There’s nothing funny at all in the relentless final hour of Decline of Western Civilization III, just grim episodes in the lives of abandoned children.

It’s a harrowing subject. These are children who drink all day, sleep in abandoned hovels and spend their days just trying to find food and evade arrest. Spheeris remains respectful, abjuring commentary in favor of allowing the kids to tell their own stories. The film is ultimately about the way that even the most marginalized people create community in the face of circumstances most of us cannot imagine.

For all its strengths, the film has problems. Spheeris seems to have realized that the musical sequences were superfluous once she latched onto her real subject; because of this, the film’s two halves are rather disjointed, the shift in tone too abrupt. She indulges in lax montage sequences that continue long after their inspiration has dwindled. She has a weakness for comedic sound effects (lots of drum hits and guitar blasts under the interviews) that lose their punch with too much repetition.

These are very minor faults in light of the film’s remarkable empathy. No one has gone further in trying to give a sense of the texture of these lives, the struggle of living on the street. What’s most astonishing is the fact that, for all their tattoos and spikes, these are children. There’s a moment in the film as heartbreaking as anything I’ve ever seen. A sweet-faced kid talks at length about why he left home: his father regularly beat him in the face with his fists. Asked what he’d say to his dad now if he could, he gives a completely sincere, gut-wrenching answer: "I’d say, ‘Hi.’"