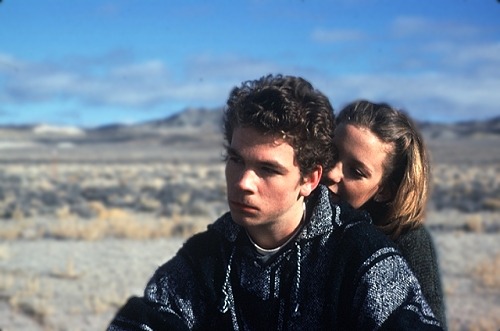 You can try to find Baxter, California, in your road atlas, but you&#146;ll come up short if you do. Baxter is the fictional setting of some oddly moving events in Desert Blue, the new film from writer-director Morgan J. Freeman.

Baxter is a nearly dead mining town. The town-limits sign boasts a population of 87, but as seen in long-shot the place looks boarded up and abandoned. Desert Blue focuses on a handful of Baxter&#146;s denizens over the course of a long weekend that begins with the arrival of a pop-culture professor (John Heard, in a wonderfully shaggy performance) and his daughter, Skye (Kate Hudson). Father and daughter are stuck in Baxter when a tanker carrying a soft drink&#146;s chemical "secret ingredient" overturns, creating a health crisis that causes the town to be quarantined by the federal government. Skye, a budding TV star, is infuriated by the delay: she has a big audition in L.A., and she doesn&#146;t want to be stuck in this townful of rubes.

Conspicuous among the rubes is Blue (Brendan Sexton III). Blue spends his days trying to resuscitate the dream that recently killed his father, an ocean park called "Baxter Beach." But the dream is dead, too, and its skeleton is plain to see in the form of a partially constructed waterslide and a dozen or so canoes that lie bleaching on the desert&#146;s dry sands. Blue&#146;s best friend, Cale (Ethan Suplee), is an overweight but utterly unselfconscious sort who&#146;s set on becoming Baxter&#146;s next deputy sheriff. Ely (Christina Ricci) passes the time by setting off her homemade bombs around town. (Whenever the townspeople hear a distant blast, the first words out of their mouths are, "She&#146;s really done it this time," but authority figures have a magical way of forgiving Ely.)

Sandy (Sara Gilbert) sells refreshments out by Baxter&#146;s other major attraction, a giant pink ice cream cone. Haley (Isidra Vega) works in her father&#146;s store and the wild-ass Pete (Casey Affleck) is determined to break through the blockade so he can participate in an All Terrain Vehicle race.

Desert Blue is superficially about the humanizing effect that this clan has on Skye, but its real pleasures lie in its off-center affection for quixotic dreams and the beautifully natural work of its ensemble. Like the shaggy-dog stories about marginal characters that Jonathan Demme created in the 1970s, Freeman&#146;s movie asks the viewer to adapt to the characters&#146; pace and lifestyle. (Cale in particular stirs fond memories of the obese sidekick in Demme&#146;s Citizens Band.) It has character revelations and a climax and all that sort of thing, but it&#146;s a lot more concerned with using itsLost Weekend theme as an excuse to parade its likable cast in a variety of laid-back situations. There isn&#146;t any heavy weather about the sociological effects of small-town environments, and its various subplots are resolved just enough to satisfy our curiosity. Even the ending is willing to leave one of the major characters left hanging over a precipice.

There are some simply beautiful scenes in this movie. One, in which Blue&#146;s mother (Lucinda Jenney) learns the truth about her husband&#146;s death, has a real ache to it just because it&#146;s so brief &#150; it cuts away before she can even begin to grieve. And the moment when a discussion about mortality turns into a seize-the-day make-out session feels absolutely perfect because it&#146;s painstakingly logical. Desert Blue is rich in unstressed details such as the guys whipping their ATVs across the desert flats like latter-day cowboys, or the paranoid Sandy poring over a giant EPA manual in a diner.

Freeman&#146;s hand slips only when he loses sight of the difference between individuality and mere quirkiness. There&#146;s no reason for Blue&#146;s mom to be a UFO nut (the fact that she is one is even sadder because Jenney is too interesting a performer to be saddled with such a gimmick), and the FBI agent who&#146;s a closet drunk feels shoehorned in from some bad TV cop-show.

But when the kids hunker down in the desert sands out by the aqueduct to drink and talk the night away, it&#146;s a warm pleasure to squat along beside them.