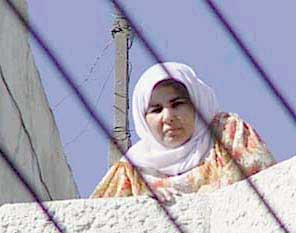 Arabs and Israelis living as unfriendly neighbors is the subject of two eye-opening Israeli documentaries screening together at the San Francisco Jewish Film Festival. Both are set in the West Bank city of Hebron, and both reveal the region&#146;s never ending tension by putting real faces on a conflict that&#146;s been so widely reported for so long, the headlines have become cliche. The films’ combined impact leaves the impression that future understanding–let alone peace–is anything but likely between Arabs and Jews.

The films focus on opposing populations. Detained shows the lives of three poor Palestinian widows, all young, living with their children in a decrepit apartment building oddly situated between two territories. The Israelis occupy the front, complete with soldiers on patrol, and Palestinians control the rear. The women are mostly resigned to their situation, and admittedly are far from happy. Directors Anat Even and Ada Ushpiz intersperse scenes from their daily lives with snippets from one-on-one interviews in which the women candidly talk about their fears, sorrows and lack of hope. The images range from the mundane (cooking for the kids to ironic (sweeping bullet shells off the rooftop after Israelis set up a shooting range there) to sad (Israelis out on the street while Palestinians are stuck inside, bound by a curfew).

Contrasting the effectively imprisoned Arabs in Detained, the Orthodox Jewish families in The Settlers live in immaculate and well-stocked mobile homes reminiscent of American suburbia. Their small, closed community, surrounded by a vast landscape of Arab dwellings, sits over an archeological site at which scholars are working to prove the Jews&#146; divine claim to the land.

Director Ruth Walk focuses on several women, matriarchs of large families, as they go about their daily lives, taking care of their children and maintaining their homes. Their combination of strident religious conviction and obliviousness to social and political intricacies is chilling; they nonchalantly point to the bullet holes in the walls and windows of their homes, and appear not to be overly distressed at the constant violence at their doorstep. Commenting that they don&#146;t like Arabs much at all, the women pay little attention to the fact that their minority community is a place where Arabs have lived for ages, too.

One of the film&#146;s most disturbing scenes shows the Jews parading in the streets, celebrating their holidays, while the vast majority of Arabs, under Israeli guard, are prohibited from going outside.