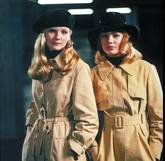 Sometimes you hold enemies to your bosom for so long that you begin to feel protective of them, and you instinctively want to leap to their defense when you see them attacked unfairly. The new film Dick is going to make a lot of Baby Boomers realize that they care about Richard Milhous Nixon more deeply than they&#146;ve realized, and they&#146;re going to resent this rank little upstart of a movie for the self-satisfied swipes it takes at him.

Betsy (Kirsten Dunst) and Arlene (Michelle Williams) are two high-school girls in Washington, D.C., who accidentally meet Nixon (Dan Hedaya) during a field trip to the White House. When Nixon asks them to serve as "the official White House dog-walkers," the flattered girls don&#146;t realize it&#146;s because they have evidence linking the White House to the Watergate break-in and that Nixon is trying to keep them quiet. Given breezy entree to the inner sanctum, they bicker with Liddy and Haldeman, argue foreign policy with Kissinger (Saul Rubinek, in a small but inspired performance), and get Brezhnev high on marijuana cookies.

The movie holds the girls out as the invisible catalysts behind the Nixon administration&#146;s most famous episodes; it&#146;s Little Big Man in modern Washington. It was they who put tape on the Watergate&#146;s basement door, it was they who caused the 18� minute gap, and so on. Betsy and Arlene begin as wide-eyed ingenues, scarcely pubescent and stupid in a thoroughgoing way, but in the course of 18 months they penetrate Nixon&#146;s facade and (not unnoticeably) develop into shapely lasses.

The film gets off on the wrong foot and never recovers. Many of the skits (they are not quite scenes) play like "Saturday Night Live" material. (Indeed, many of Dick&#146;s cast members come from "SNL" or "Kids in the Hall," its Canadian counterpart.) And for one long stretch Dick is nothing more than a send-up of All the President&#146;s Men. But, as Mel Brooks wasted years of his life proving time and again, film parodies only work when something more than a movie is at stake. When Bruce McCulloch as Carl Bernstein flips his longish hair, he&#146;s simultaneously gigging &#146;70s cool and Dustin Hoffman and what passes for virility in movies &#150; it&#146;s funny. But Dick is rarely that clever. Most of the President&#146;s Men spoof lifts entire scenes from the earlier film &#150; Ben Bradlee telling the reporters that they don&#146;t have the story nailed down, Betsy taking a paranoid nighttime walk &#150; and applies a strained comic tilt to them. Having run out of ideas, Dick butters up its viewers by tossing in-jokes to them.

Yet it&#146;s hard to fathom who Dick was made for. Its historical references are so specific that few people born after Watergate will get them (teenagers sit in silence for long portions of the movie), while its witless sitcom shenanigans should turn off anyone who&#146;s old enough to remember the era. Whenever the movie starts to lose steam, it tries to jump-start itself by dumping on one of its characters. One of our two views of Pat Nixon (she has no dialogue, and she wouldn&#146;t want any in this movie) shows her lying in bed and snoring loudly while her husband looks on with disgust. Deprived of real ammunition (apparently Pat Nixon never hurt a soul in her life), Dick contentedly sneers at her bodily functions. And Pat is not alone. The film spends a lot of time deriding its characters for snoring, burping, farting, and scratching their asses, which are things that everyone does occasionally &#150; that is, everyone except director Andrew Fleming and his co-writer, Sheryl Longin, if their attitude is any indication.

Unapologetic smugness comes naturally to Dick&#146;s creators, and they save their greatest contempt for the title character. God knows that Richard Nixon himself brought down most of the viciousness he encountered in his lifetime; few moments in American history offer deeper moral satisfaction than the central event of August 9, 1974. Nixon, a cynic and hypocrite of the first order, gave us an administration that was equal parts hubris and karma. When he was still stonewalling from inside the Oval Office, his very arrogance was justification enough for the old head-shop poster that showed him being sodomized in a prison cell. But where is the sense &#150; either the common sense or the moral sense &#150; in going after someone who&#146;s been politically dead for a quarter of a century (and literally dead for a year or two)? Fleming couldn&#146;t be grinding a personal ax for he was all of 10 years old at the time of the hearings. The current political scene is teeming with potent symbols of mendacity, so why are we still kicking Dick Nixon around? Because the &#146;70s happen to be chic right now? Or is it because Nixon&#146;s not around to defend himself and few other people will care to?

After the Nixons, Dan Hedaya is the most deserving of our sympathy. Hedaya does an impressionistic riff on Nixon that&#146;s closer in spirit to Philip Baker Hall&#146;s performance in Secret Honor than it is to the relatively literal impersonation that Anthony Hopkins gave us in Nixon. Hedaya indulges in none of Nixon&#146;s jowl-shaking or tremulous finger-pointing; he lets his perpetually tightened shoulders remind us of who he&#146;s supposed to be. And in the early part of Dick, before Nixon becomes a mere punching-bag, the scenes where he works his charm on the girls serve as welcome ballast for their synchronized giggles and chirrups. Hedaya makes Nixon fun, even exciting, to be around.

But by the end of the film Hedaya has no character to play because Dick&#146;s conception of Nixon has shriveled him to a mere butt for the girls&#146; antics. The climax &#150; with Nixon taking his final walk across the White House lawn, Carly Simon&#146;s "You&#146;re So Vain" booming away on the soundtrack, and the nubile tootsies wearing hot-pants cut from an American flag and waving a banner that reads "YOU SUCK DICK" &#150; is mindless in so many ways that it must hold some kind of record.

What we couldn&#146;t see during much of Nixon&#146;s lifetime was that his story (like that of Lyndon Johnson before him) was a tragedy. His various faces that were so familiar to us &#150; the neutered square, the laminated salesman, the canting hypocrite, the sweat-logged dissembler &#150; were all monstrous, repellent. He was a pinched and constipated man, uncomfortable in his own body and averse to being touched, who was driven by his demons into the most visible occupation in the world. He was a walking projection of our deepest fears; his need to be accepted, even under false pretenses, was only an exaggerated version of our own. Writers as different as Tom Wicker and Hunter S. Thompson saw all of this, just as they saw that Joseph Conrad&#146;s description of Lord Jim &#150; "He was one of us" &#150; applied equally well to Tricky Dick.

We have a lot more to gain from contemplating Richard Nixon than we do from ridiculing him. But you&#146;d never know it from Dick.