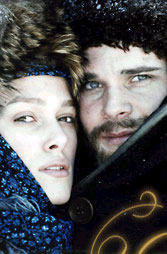 It might seem cheeky of Masterpiece Theatre to newly adapt Boris Pasternak&#146;s monumental novel about the 1917 Russian Revolution so close on the heels of a sumptuous DVD restoration of David Lean&#146;s blockbuster movie. For some, Omar Sharif and Julie Christie embody Doctor Zhivago&#146;s star-crossed lovers as memorably as Clark Gable and Vivien Leigh in Gone With the Wind. But Lean&#146;s 1965 film has always had detractors, and justifiably so. The grandeur that the director achieved a few years before with Lawrence of Arabia gave way in Doctor Zhivago to mawkishness. Worse, Pasternak&#146;s book was whittled down to its most numbingly banal components. Veteran Masterpiece Theatre screenwriter Andrew Davies clearly relished the opportunity to bring a fresh approach to the material. PBS viewers who tune in with only the mildest curiosity may find their low expectations overturned. Evocatively filmed in the Czech Republic (versus Lean&#146;s uninspired use of Spain and Canada), this lavish two-part four-hour production succeeds in giving the earlier film a serious run for its money.

The universality of Pasternak&#146;s novel&#151;and its implicit rebuke of Communism&#151;can be discerned in the book&#146;s reverence for literary self-expression and the sanctity of individual conscience. The author&#146;s poet-doctor surrogate, Yury Zhivago, perceives life as a luminous pantheistic force that is &#147;constantly renewing and remaking and changing and transfiguring.&#148; Although Zhivago is sympathetic to the underlying spirit of the revolution, he despairs that &#147;it has cost such a sea of blood that I&#146;m not sure that the end justifies the means.&#148; Published to stunning worldwide success beginning in 1957, the novel was an embarrassment to Soviet authorities. Its publication was blocked in the USSR for thirty years until glasnost finally cleared the air. Pasternak felt compelled to turn down the Nobel Prize for Literature when it was announced in 1958 that he&#146;d won. He never saw the Prize money or the substantial royalties that his novel accrued in the West. A state-sponsored campaign of vilification contributed to his declining health. He died in Russia at the age of seventy in 1960.

While this Masterpiece Theatre offering boasts a first-rate script and energetic direction (by Giacomo Campiotti), the casting is less consistent. Hans Matheson (Mists of Avalon) brings little more than conventional leading-man earnestness to the title role of Zhivago. Rising young actress Keira Knightley (Bend it Like Beckham, Pirates of the Caribbean) is a cream-complexioned vision of beauty as Zhivago&#146;s adulterous lover Lara, but connecting with her character&#146;s deeper layers of strength and anguish ultimately seems beyond her range. Knightley does her best work in the drama&#146;s first half, depicting Lara&#146;s descent into sexual exploitation at the hands of the malevolent lawyer Victor Komarovsky, played by Sam Neill (Jurassic Park, The Piano). Rod Steiger was a powerhouse of scene-stealing menace in the role of Komarovsky for David Lean. Neill, a skilled but far from menacing actor, wisely opts for a different interpretation that mingles foppish arrogance with a hint of polymorphous perversity. It&#146;s a witty scene-stealing performance in its own fashion&#151;sort of John Malkovich-Lite&#151;and it provides Neill with a gleeful holiday from the plodding milquetoasts he&#146;s often saddled with playing.

The story&#146;s tension is built around the fateful manner in which Zhivago and Lara, although married to others, find themselves repeatedly thrown together in the unlikeliest of highly charged circumstances. Whether it&#146;s the attempted suicide of Lara&#146;s mother (Maryam d&#146;Abo), or Lara&#146;s attempted murder of Komarovsky, or tending the wounded on a WWI battlefield, or in an isolated village hospital far from Revolutionary Moscow, Zhivago invariably arrives on site as an attending physician and conveniently stumbles upon Lara nearby. Andrew Davies&#146;s script thankfully goes further in bringing out the novel&#146;s larger theme of human hearts in conflict with political expediency. As in Pasternak, the romance isn&#146;t always center stage; well-drawn subsidiary characters find their way to the fore. Memorable supporting roles include Lara&#146;s husband Pasha (Kris Marshall), who convincingly progresses from naive idealist to treacherous revolutionary to disillusioned lost soul. Also making a strong impression is actor Hugh Bonneville (familiar from Masterpiece Theatre roles in Daniel Deronda and Madame Bovary) in a harrowing train ride flashback as Zhivago&#146;s father, a wealthy industrialist ruined through his association with the ubiquitous Komarovsky.

Pasternak&#146;s use of coincidence and recurrence&#151;admittedly ham-fisted at times&#151;is intended less for melodramatic effect than as a kind of mystical alignment of historical and divine forces. (Novelist and Russian emigre Vladimir Nabokov dismissed Pasternak&#146;s book as &#147;penny-awful&#148; pulp fiction. Critic Edmund Wilson, who&#146;d taken to feuding with Nabokov on the subject of Russian literature, argued at length for Doctor Zhivago&#146;s brilliance and called it &#147;one of the great events in man&#146;s literary and moral history.&#148;) Zhivago, in opposition to Marx, proclaims &#147;life is never a material, a substance to be molded.&#148; Not surprisingly, this is a love story that at times assumes the solemnity of a religious allegory, which in this production is beautifully evoked when Zhivago glances out a cafe window and first sets eyes on Lara. With their faces superimposed over one another in the pane&#146;s reflection, they appear momentarily like stained-glass saints fused in eternal longing.