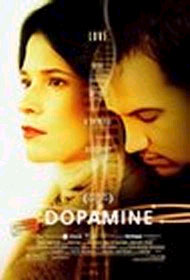 Add Dopamine to that list of quintessentially San Francisco movies. Director/writer Mark Decena&#146;s modern meditation on love, which pairs a hip, emotionally distant programmer with an impulsive, artsy kindergarten teacher, is perfectly set in the Bay Area and displays the independent, art house spirit that characterizes lots of Sundance Institute films. It&#146;s the first movie to be conceived, shot and distributed solely through the Sundance network.

Rand (John Livingston) and his colleagues Winston (Bruno Campos) and Johnson (Rueben Grundy) are South-of-Market programmers working furiously to create a cute, animated character as an educational tool to teach young children compassion. Before the project is completely developed, Japanese businessmen funding the venture ask that "Koy Koy" be tested in a classroom. They want to see if the adorable interactive bird-like creature really will respond to the kids&#146; gentle voice commands and spark their attention and empathy.

Rand, whose father (William Windom) has taught him that emotional impulses like love are strictly the result of chemical reactions &#150; the occurrence of dopamine — in the brain, has every belief that his cartoon creature is good for the kids. He also stands by his father&#146;s "science explains emotion" theory as he witnesses his own parents&#146; inert relationship, which died abruptly when his aging mother, afflicted with dementia, failed to recognize her family. She remains comatose.

Thankfully, Rand isn&#146;t a jerk who is incapable of feeling love. In fact, he&#146;s quite susceptible to it, and even recognizes it. Decena (in his directorial debut) graphically illustrates his feelings on screen with nifty computer and sound effects that signal when Rand&#146;s neurotransmitters act up, particularly when he&#146;s around the attractive Sarah (Sabrina Lloyd). Though Rand and Sarah are strangers when they make unquestionable make eye contact at a neighborhood bar, it&#146;s the aggressive, pragmatic Winston who picks her up and has a brief sexual encounter with her that ends badly.

But Rand&#146;s impulses don&#146;t go away; it turns out Sarah&#146;s kindergarten class is where Koy Koy is being tested. Yet the software critter isn&#146;t the only thing being tested. Both Sarah and Rand, who are physically drawn to each other and begin a hesitant romance, undergo their own emotional trials and start to challenge each other. Sarah, who creates dramatic paintings when she isn&#146;t hanging out in bars or in class, isn&#146;t sold on Rand&#146;s computer project, but she appreciates his insights and sensitivity. Rand, meanwhile, becomes more deeply involved with Sarah, to the point where, for the first time ever in a relationship, he questions whether his connection is merely physiological. A former lover and current friend, funky coffee house worker Machiko (Nicole Wilder) teases him, making him admit he&#146;s never been in a relationship for more than six moths.

Against a backdrop that presents San Francisco in glorious relief &#150; from a fog-shrouded Golden Gate Bridge to indie art galleries, cozy coffee joints and computer-strewn offices, Sarah and Rand get to know each other, and discover each other&#146;s secrets. Decena&#146;s intelligent, thoughtful script, which won an award at the 2003 Sundance Film Festival for excellence in dealing with science and technology, is buttressed by the intricate details that make what could be a superficial story into a real human affair. Add to it some marvelous San Francisco scenery &#150; vistas of the Presidio, Rand taking a swim in the Bay in a wetsuit, the "critical mass" gathering of bicycle riders on downtown streets in rush hour traffic &#150; and it adds up to a tale that compellingly typifies a slice of Bay Area life. Though people who haven&#146;t lived through the dotcom boom and bust will enjoy its thoughtful premises, locals who revel in San Francisco scenery and rituals will enjoy it all the more.